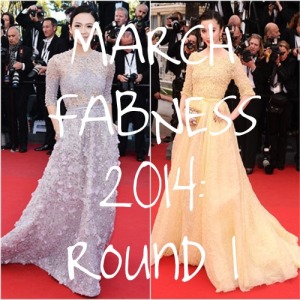 Four more match-ups are ready and waiting for your votes, dear readers.

KATY: Let’s just get the awkwardness over with, okay, Taylor?

TAYLOR: Um, I’m sure I don’t know what you mean.

KATY: Come on, girl. We’re eskimo sisters. We need to be able to talk about it.

TAYLOR: I think you’re confusing me with someone else. Clearly, based on this outfit, I’m an ice queen, not an eskimo.

KATY: No, moron, I’m trying to say that we both had sex with the same guy and we absolutely need to talk about how terrible John Mayer is in bed.

TAYLOR: Oh, THAT! Well, why didn’t you say that in the first place?

KATY: I tried to! I just thought it would be awkward to talk about ex-boyfriends.

TAYLOR: I don’t understand the words that are coming out of your mouth. LITERALLY ALL I DO IS TALK ABOUT EX-BOYFRIENDS. Don’t you even listen to my music?

KATY: Um… listen, Taylor, I know I’m the girl who shoots whipped cream out of her tits in her music videos, but I think your music is kind of cheesy.

TAYLOR: CHEESY?! Oh, the battle is ON now, bitch.

ZHANG: So, from one Chinese superstar to another, what’s your favorite thing about being as beautiful and fabulous as we are? 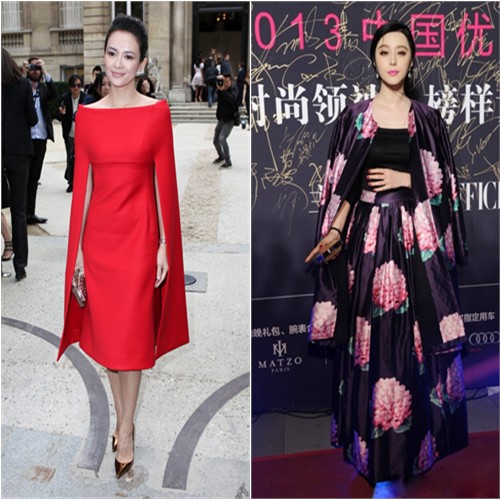 ZHANG: Really? My favorite thing about fame and fortune is definitely the capes.

FAN: Oh, I retract my previous answer. It’s definitely all about the capes.

FAN: And the dramatic gowns.

ZHANG: And the necklaces worth more than the gross domestic product of a small European nation.

FAN: Did we already cover the shiny hair? Whatevs. I think it bears repeating.

NICOLE: I hope you don’t think this standing ovation means I approve of your outfit, Ms. Seyfried. I would never be caught dead in something as pedestrian as shorts.

AMANDA: Wow. Way to own your reputation as a frigid bitch! 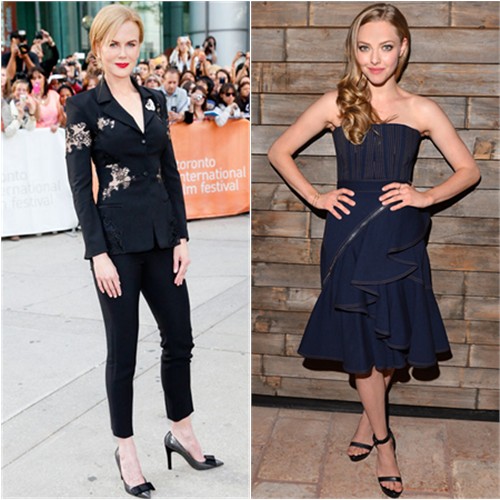 NICOLE: There are worse things than being frigid, darling. And wearing a denim dress is one of them.

AMANDA: Okay, I know “denim dress” sounds like an outfit from Clarissa Explains It All on paper, but you have to admit, the result is much more fashionable than the description.

NICOLE: I might be inclined to agree with you, but I have a rule about getting too friendly with people who wear the same pair of shoes more than once a year.

AMANDA: I’d rather wear the same pair of Givenchy strappy sandals every day for the rest of my life than be caught dead in those Barbie shoes. Tell me, are your feet pointed at an almost 90-degree angle, the better to fit into those plastic-looking shoes?

NICOLE: I will not accept criticism from a woman wearing the world’s largest pussy bow.

AMANDA: Just how enormous is that stick up your ass, Nicole?

NICOLE: How dare you! I do NOT have a stick up my ass! And if I do, it’s only to perfect my posture.

AMANDA: You’re a fucking nutcase. I’m out of here. 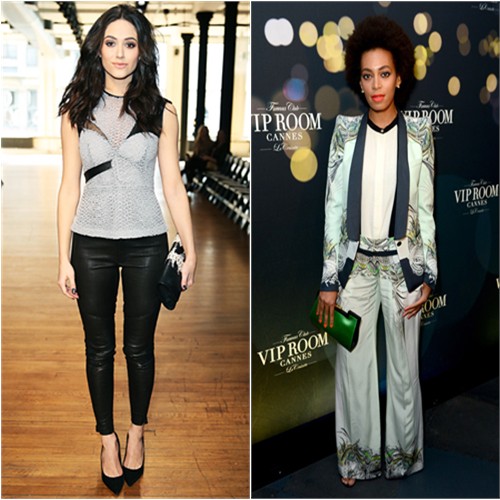 EMMY: How is it exactly that you’re able to pull off a wide-legged tuxedo that appears to be printed with abstract palm trees?

SOLANGE: When you share DNA with Beyoncé, there is nothing in the world you can’t pull off.

EMMY: That makes a lot of sense, actually. Can you share some other perks of being the Queen Bey’s little sister?

SOLANGE: You mean, besides being the aunt to the coolest two-year-old on the planet? 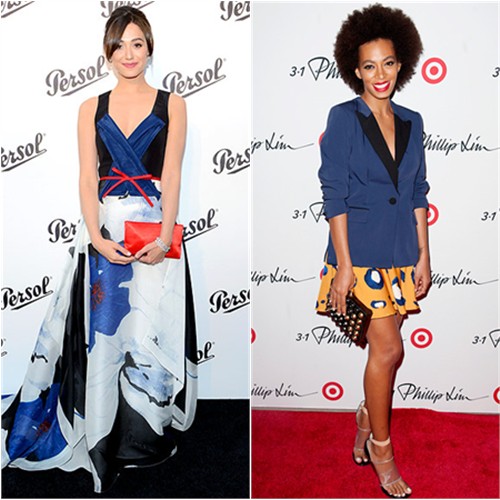 Emmy’s gown and purse by Carolina Herrera; Solange’s jacket and skirt by 3.1 Phillip Lim, purse by Fendi, shoes by Givenchy

EMMY: Yeah, I mean, that was kind of a given. I’m 27 years old and I’m jealous of that kid’s wardrobe.

SOLANGE: Girl, you do not have to tell me. She was more famous as a fetus than I’ll ever be in my life.

EMMY: Well, that may be partly due to your penchant for wearing pants made of trash bags.

SOLANGE: Don’t even, honey. I am working the SHIT out of this look, and you know it. 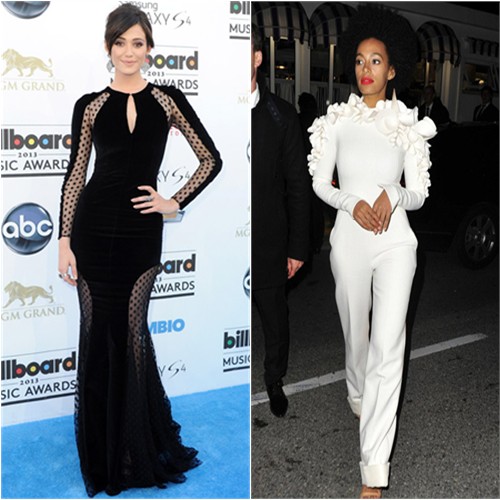 EMMY: Fine, fine. I’ll concede once again that your Knowlesian genetics give you a preternatural ability to pull off the world’s most ridiculous outfits. Also, can I borrow that jumpsuit?

SOLANGE: It’s all yours, but just know that it will always look better on me.

Don’t miss out on voting in the Chanel Bracket! And join the party tonight as this Diva live-tweets the Oscars.