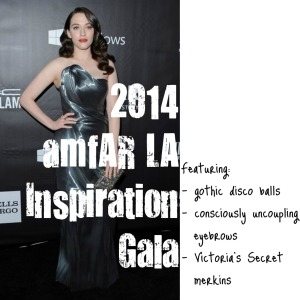 Almost everyone looked like a hot disaster at the amfAR LA Gala, but at least it was for a good cause!

It’s not often that a C-lister upstages all the A-listers at a gala, so let’s hear it for Kat Dennings. Her mind-bogglingly gorgeous liquid nylon gown had me all, “Rihanna what? Miley who? I GIVE NO FUCKS, I’M ONLY HERE FOR KAT.” We just saw this same fabric on Camila Alves – I loved it on her, and I love it on Kat. A+.

The color is an absolute fucking dream on her, and her hair and earrings are delightful. From this angle, it appears that Camilla Belle has no internal organs whatsoever, but let’s blame that on a combination of Photoshop, camera magic, and well-placed belts.

Eddie, let’s be best friends and share wardrobes forever and ever and ever, and maybe sing some Les Mis to each other, okay?

Covering your baby bump in 8,000 pounds of black sequins is the way to go. Girlfriend looks like a gothic disco ball, in a really good way.

Milla’s maternity fashion game is not quite as excellent as that of the 1,000 other celebrities who are currently with child, but girlfriend is out and about, working the step-and-repeat, in a tight dress and (presumably) heels, in what looks like her third trimester. She gets an award just for showing up.

The makeup is almost terrifyingly clownish, and Gwyn’s eyebrows appear to have consciously uncoupled from her face, but I dig the tux. The subtle side cut-outs are an excellent detail.

It looks more like really pretty window treatments than anything else, but sadly, that’s enough to make Ashley one of the better-dressed people at this event. Kudos for attending a charity gala, celebrities, but it only half-counts if you don’t dress to the nines.

Unless Victoria’s Secret is releasing a line of merkins, I cannot at all understand the purpose of this dress. And the back really doesn’t help:

I don’t mind being able to see her whole butt – it’s Alessandra Ambrosio, for God’s sake, so it’s QUITE the butt – but the illusion netting is destroying my will to live.

An exceptionally huge misstep from someone who usually kills it at events like this. Dita is supposed to be all old Hollywood glam, all the time, but the world’s largest belt is ruining any chance she had at that kind of vintage chicness.

It’s almost comforting to know that Kristin Davis is still dressing like a fussy six-year-old.

I found the top of the gown completely overdone and indistinguishable from everything else Lea Michele has ever worn. Then I got to the bottom, which looks like a particularly terrible episode of Project Runway where a designer ran out of sequins halfway through their dress. I’m sure that’s supposed to be edgy or cool, but it looks like shit.

Weirdly enough, the only thing I really hate about this outfit is the thigh-high stockings. I actually think the collar works, as do the nipple pasties, because, you know, she’s Rihanna. But the stockings are distracting, and they certainly don’t work with sandals.

I didn’t particularly like this from the front, but things get infinitely more horrific from the back:

ILLUSION NETTING BUTTONS? WHY?! Why, God, why would anyone want to look as if they have buttons SPROUTING OUT OF THEIR SPINE? This is absolute nonsense, dear readers. I will not stand for it.

If you Google image search “basic bitch,” this should be the first thing you see.

Sorry, Miley, but no one fucking cares anymore. There’s a point of diminishing returns on nudity for shock value, and you hit it somewhere around when “Wrecking Ball” was released.