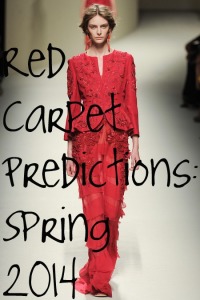 There’s no rest until we’ve predicted something fabulous for every star, dear readers.

END_OF_DOCUMENT_TOKEN_TO_BE_REPLACED

The great thing about having the flu is that I have all the time in the world to blog! We’ve got some serious fabulous to get through, so let’s start with New York Fashion Week’s hottest (and nottest) trends. 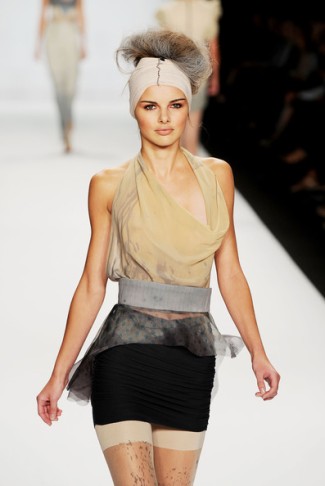 I first noticed this fabulous trend while flipping through the Project Runway collections. I couldn’t believe how strange and sexy the paint splattered across the models’ thighs seemed. This absolutely gorgeous top is also paint-splattered. It’s hard to make something like that look expensive instead of gimmicky, but April nailed it, through and through. And clothes artfully splattered with paint made their way up and down dozens of other runways during New York Fashion Week.

The wild wild west was a huge trend last season, and the love of the heartland permeated this season as well. The influences ranged from Native American to prairie girl to old-time saloon whore, and they spanned collections from Ralph Lauren to Anna Sui.

The world’s ugliest sunglasses made appearances on the face of every malnourished woman over 5’10” this season. Inspired by John Lennon, that atrocious remake of Willy Wonka, and those little plastic glasses they make you wear at the tanning salon, an embarrassingly large number of designers showcased some seriously fugly sunglasses. Let’s take a look.

Nothing like a little crocheting to get your through the spring! Knitwear, particularly in black, white and cream, was all over the runway this season. Shirts, coats, dresses and more, designers focused on the beautiful intricacies of knit garments in their collections.

Check back here for more Fashion Week updates! Look out for posts on my red carpet predictions, my favorite collections, and the best and worst looks of New York Fashion Week! Follow me on twitter for all the latest news @democracydiva.

Welcome to the wild, wild west.

Farmers, cowboys, and Native Americans were the inspiration for many fabulous ensembles and even entire collections this season. Dozens of designers took the themes of the west to the runway this week, so I’d like to take a look at their different interpretations of the west.

The Cowboys
Some designers emphasized cowboy-style shirts, buttoned up to the neck, as an homage to the west.

Posen went simple, elegant, and trendy with his satin urban cowgirl (and her particularly adorable shoes).

Herchcovitch went more exaggerated and less wearable than Posen, but did a nice contrast of the hard studs with that beautiful purple print to nail the gritty-meets-pretty, cowgirl style.

The Period Pieces
Other designers weren’t afraid to go costumey, and dressed their models in full-on prairie girl and Native American garments.

Theallet’s model is straight off of the Oregon Trail, just with more cleavage and less petticoats. Well done.

I could do without the colored strings tied around her waist, but I love Rast’s indigenous feel, the beaded accessories, and their contrast to the combat-meets-couture boots.

A few designers threw in just a little element of Native American style into an otherwise modern look.

I doubt this lady had a curling iron and slim-fitting corduroys on the reservation in the 19th century, but the beaded top is simply beautiful.

This was certainly the most surprising and innovative use of the west; Rodarte went daring with a bright, traditionally western print in an otherwise soft and modern outfit.

A Class of Her Own

But nobody, and I mean nobody, did the west the way my girl Betsey did.

She’s got Betsey’s interpretation of a cowboy hat, a gangster’s mask, a sherrif’s badge, and a toy gun. Leave it to Betsey to throw all those contradictions together and call it an outfit.

Dictionary.com defines jodhpurs as “riding breeches cut very full over the hips and tapering at the knees to become tightfitting from the knees to the ankles.” Put simply, they’re baggy at the thigh, and tight from the knee down. I like to think of them as the mullet of pants.

Pants inspired by jodhpurs made appearances at far too many runway shows this week, including Camilla Staerk, Malandrino, Alica + Olivia, Alexandre Herchcovitch, Twinkle by Wenlan, Suno, Andy & Debb, and many others. Let’s see who was able to sort of pull off such an awful trend, and who just embarrassed the glorious name of Pants everywhere.

The Good, The Bad, the Malandrino

These are minimally offensive. The structured fabric helps minimize the baggy effect at the thighs, and the plum-colored tweed print is lovely. The look aims for high fashion, so although it’s not very wearable, it’s not supposed to be. As far as jodhpurs go, you can’t do much better than this.

Same designer, same type of pant, and yet this is miles more disturbing than the previous look. It’s certainly not helped by the garish accessories and awkwardly draped shirt. But add these exaggerated jodhpurs to the mix, and she ends up looking like a transvestite pirate (and not in a good way).

Well, not quite kudos, since you still fucking put jodhpurs on the runway, but at least you did it in a semi-wearable way. This may be more of a legwarmers-over-baggy-pants situation rather than jodhpurs, but the effect is the same. The chic blazer helps – clearly, the rule for passable jodhpurs is that they need to be paired with something more structured and stylish to minimize the disheveled-ness of the look. But I could certainly see a long-legged starlet wearing this out on the town and only being marginally mocked for it. On an unrelated note, doesn’t this model look remarkably like Calista Flockhart?

Again, the jodhpurs are vastly improved by a sexy structured blazer. If it weren’t for the appearance of the world’s largest cameltoe that this photo conveys, this would be a pair of pants that I wouldn’t mock a stranger for wearing.

The Worst of the Worst

I’m too nauseous to think of anything witty to say.