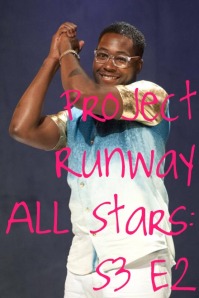 Welcome to the creepiest, crawliest episode of Project Runway you’ve ever seen.

The Challenge: It’s Project Runway meets Fear Factor! The designers must select a live insect or arachnid to serve as the inspiration for an avant garde look, even though they are not given nearly enough time to create something truly thought-provoking and innovative. (But such is the way of the Runway – repeatedly demanding the impossible from an increasingly over-exhausted and psychotic group of divas and seeing what sticks.)

Guest Judge: Jewelry designer Jennifer Meyer, who was lovely, and former Project Runway winner Anya Ayoung-Chee, because apparently this show will not allow me to forget that truly atrocious season and its completely undeserving winner. And was it just me, or did Anya seem to be playing up that accent way harder than she ever used to? Just because it worked for Sofia Vergara doesn’t mean it will work for you, Anya.

I thought this was fairly stunning and a very impressive entry from Christopher, who I tend to consider one of those designers that’s here for the soundbites and not because of his design skills. But this actually made me stop and think and want to see it from every angle, which is about as much avant garde as a person can hope to accomplish in a single day. (Especially if that person is Christopher.) I loved the smoky effects more when I thought they were fabric, but since I just saw a photo of Christopher backstage spraypainting his model’s neck, I’m thinking the designs at the ankles might be paint as well. Not necessarily a bad thing, but I was blown away when I thought he had created that smoky look with fabric rather than spray paint, and now I’m somewhat less so. I think my least favorite element of this design were the clear plastic panels in the skirt, which absolutely looked like Christopher ran out of fabric and grabbed a roll of saran wrap to try and remedy the situation. But I found his bug inspiration to be clear without being literal, and I thought the details on the arms and shoulders were a lot of fun.

This is truly terrible, from (crack)head to toe. The only thing I could see when this came down the runway was that crooked seam straight down the center of the dress. To me, that was a much bigger crime than the neck piece, which was certainly unfortunate. And the dress didn’t billow beautifully in the back – it hung there, like a fitted sheet. The color certainly didn’t help, but the color is probably like, the 30th worst thing about this. There’s a long list of complaints. So a fair farewell to Daniel, who is sweet and talented but couldn’t pull this look together.

A very solid entry. It was worthy of the top three just because it looked so different from everyone else’s work, but it also looked quintessentially Elena. I love the colorblocking and the way she recreated the insect shell, but I can’t pretend that a silhouette this simple is avant garde, even if it comes in crazy colors. This wouldn’t have looked too out of place in her decoy collection, which is what makes me think it’s not quite over the top enough to really be avant garde. 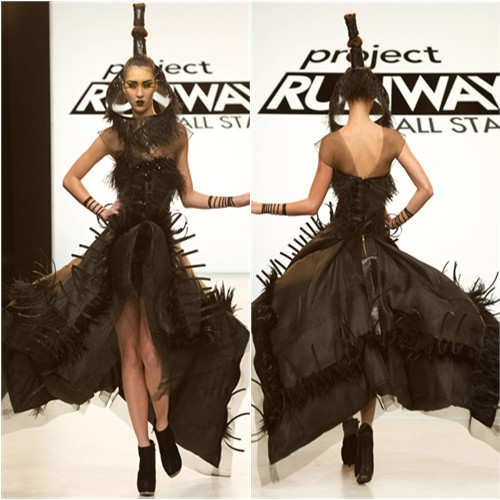 Apparently, Irina is still using tefillin as an accessory, and it’s still bothering me. (Not in an “I’m offended” way. Just in an “I don’t think this is necessary or chic” way.) But I liked this dress and its weird little head piece. It wasn’t quite impressive enough to be in the top three, and I think a few too many designers decided on all-black looks, but this had movement and intrigue that made it really enjoyable to watch.

Jeffrey can be obnoxious as hell, but I actually had to side with him during his little runway debate when Isaac claimed “avant garde doesn’t have to mean unwearable.” Well, regardless of whether that’s true (and I’m not sure it is), it didn’t matter. Jeffrey’s look was crappy because it was crappy, not because it was unwearable, or too avant garde, or not avant garde enough. He used a hood and a lampshade-like cape to cover up the fact that the (very ordinary) clothes he made were shoddily constructed and not at all interesting to look at. I’ve been watching this show for far too long to be fooled by this kind of smoke and mirrors. This look was a whole lot of ugly, and not an interesting enough ugly to satisfy the requirements of the challenge. Instead, Jeffrey threw as much crap as he could on top to hide that, and hoped for the best.

This was kind of spectacular, if not quite avant garde enough. But I loved the creepy trim on the pants and behind the jacket, especially with the lovely shape of that jacket in the back.

Oof. Somehow, Melissa managed to make something that wasn’t avant garde, AND didn’t recall her inspiration enough, AND didn’t have literally any redeeming qualities. It’s almost hard to screw up on that many different levels. She better be thanking her lucky stars that Daniel created something that was so aggressively terrible, because this was just as bad, but not quite as obvious about it. 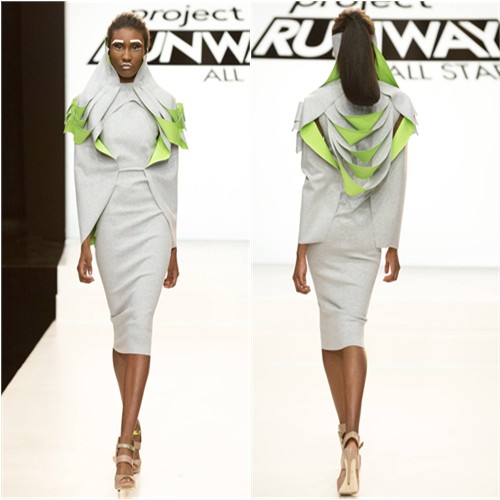 Weird, fun, and the use of neoprene made for a really interesting texture. Again, I’m not sure that this is avant garde enough, but I think by this point in the post, we’re pretty clear on the fact that nobody was able to really push the envelope in such a short amount of time. (Not because they’re untalented, but because this is always one of the most unreasonable, fuzzily-defined challenges of the season, and this time, they weren’t even given some extra time to really get creative.)

Adorable, weird, bug-like, fun, and kind of strangely wearable. It’s too much of a traditional cocktail dress to really be avant garde, but at least it’s got some badass personality and attitude, like most of Seth Aaron’s work.

First of all, a thousand points to Viktor because he was literally fanning himself during the runway show. WITH A FAN. I think I had to pause the show to laugh for ten minutes after that. But I am surprised that this didn’t make it to the top three, since I thought it was by far the most incredible garment on this runway. I thought the silhouette was thought-provoking and interesting, but still flattering; the design following the neckline is absolutely gorgeous; and the styling absolutely kicked ass. My undisputed pick for the win, no matter what those crack-smoking judges might think.