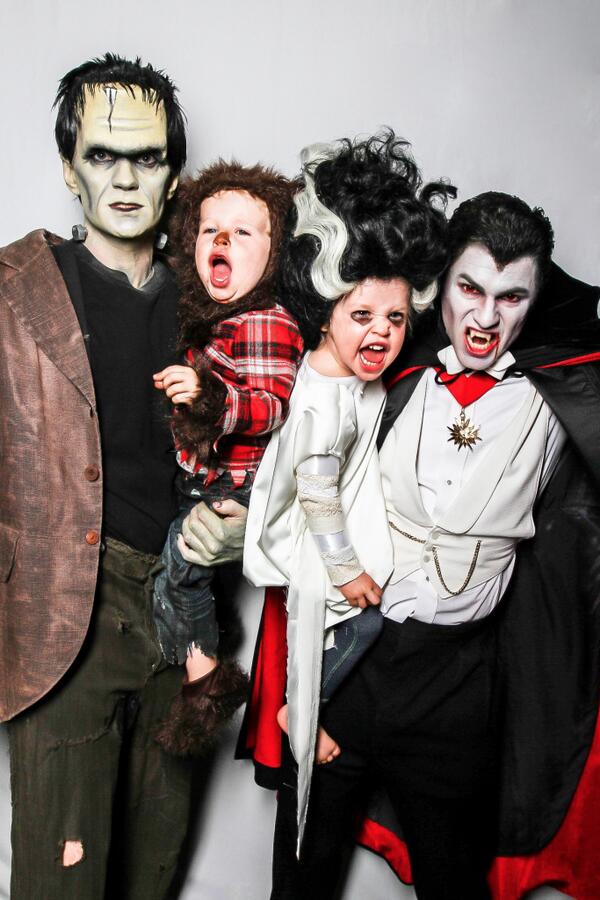 The clear and obvious winners of Halloween, and of life itself. Don’t get me wrong, I love my own family and I’m 25 years old, but I totally want NPH and David to adopt me. And since celebrities do everything bigger, this was not the only delightful themed group costume of the Burtka-Harris Hallween:

I don’t know why, but I think this is the funniest fucking thing I’ve ever seen. And I also love that Melissa McCarthy goes trick-or-treating with Sandy and her son. But Sandy didn’t leave adorable little Louis all alone in his costuming, as she proved with her next costume:

SANDRA BULLOCK with her son Louis

This is actually a fabulous dress, no? And that makeup is terrifically terrifying.

An infinite amount of points to Miley Cyrus for being meta and dressing like the other most scandalous moment in VMAs history. That’s just plain brilliant, and girlfriend committed to the look.

CINDY CRAWFORD and RANDE GERBER as Slash and Axl Rose

I swear to you, I looked at this picture and thought to myself, “Wow, Slash looks fantastic, but I really wish he had dressed up for Halloween.” NOPE. THAT’S CINDY CRAWFORD. And her hubby makes a positively delicious Axl Rose.

Absolutely killing it. (Not the dog! The outfit!)

She had vericose veins and saggy knees. But even Heidi Klum knows that when she’s 80 years old, she’ll still be wearing plunging necklines. Go and get it, Ms. Klum.

I don’t know what this is, but she’s majorly pulling it off.

ALYSON HANNIGAN and ALEXIS DENISOF and their daughters Satyana and Keeva

I love that Alyson Hannigan is as into adorable, over-the-top family costumes as her co-star Neil Patrick Harris is. I hope their babies are all best friends.

I want those stockings. NOW.

I know most people probably think this is lame, but I don’t think there’s anything more hilarious than January Jones dressing up as Betty Draper in full bitch-face mode.

Amazing. Go and get it with those boots, Naya.

ALESSANDRA AMBROSIO as the Queen of Hearts from Alice in Wonderland

It’s not even fair how good she looks in that wig.

Smurfs everywhere are offended by Adam Lambert’s blatant use of blueface.

I’m no fan of Jimmy Kimmel, but he makes a strangely lovely Snow White, doesn’t he? And obviously I want to be Mindy Kaling when I grow up. Also, she should consider wearing this hat in real life. Maybe.

Fergie is boring, but I love Rocky Horror, so this one is a wash.

TOM BRADY and GISELE BÜNDCHEN as the Cowardly Lion and Dorothy

Shut up. People as hot as you shouldn’t also get to be this cute.

She should have gone as the wrecking ball.

This is truly terrifying and I don’t know what’s happening.

You’re tacky and I hate you.

Were your Halloween costumes more fabulous and over-the-top than the starlets? Let yourself be known in the comments, dear readers. We have to humble the celebrities somehow.