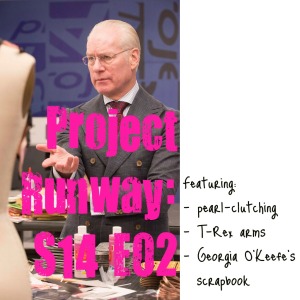 The Challenge: It’s time for the notorious unconventional materials challenge! The designers had one day to create garments out of Hallmark greeting cards (if they’d had two days, maybe everything would have sucked exponentially less!), so we basically got to watch a 90 minute commercial. How fun and unique for the audience!

Guest Judge: Notable fashion nobody Ashley Tisdale. She seems sweet enoug, but I’m not exactly clamoring to take style advice from the girl.

Did this have execution problems? Of course it did. These poor bastards had one day to make dresses out of paper – every garment had execution issues. Most of them also had little to no creativity or design – but Amanda’s did. The faux-lace treatment she did on the top was damn near genius. And the skirt isn’t nearly as bad as the judges made it out to be. The sloping hemline didn’t make much sense to me either, but I’ll award points to anyone who made something other than a strapless cocktail dress. That at least takes some level of vision. This should never have been in the bottom, when there were looks with both terrible construction AND a lack of design that were deemed safe.

Ashley had immunity, so I guess she took a nap and then glued some greeting card stuff onto muslin? I actually thought this whole thing was made of paper, but the judges said she broke the rules by using too much muslin, so what the hell do I know. Either way, the model couldn’t move an inch in the damn thing. I just wanted to give this poor model a hug, but I’m not sure how she could have reciprocated it with those T-Rex arms.

And here I thought things were racist in the premiere episode? Silly me. Blake’s “I don’t speak Indian” was offensive and embarrassing. We know you don’t speak “Indian” (P.S.: NOT A LANGUAGE, idiot child), but Swapnil is multilingual, so stop throwing shade at someone who’s BETTER AT LANGUAGES THAN YOU ARE, you whiny little brat. Worse yet, Blake didn’t seem to realize he’d done anything wrong. In fact, he seemed to believe his behavior was ADORABLE. News flash: being a cute white gay boy doesn’t give you an excuse to say every bullshit thing that comes into your overly-inflated head. Have these people never met someone from another country before? What the hell is going on with the incessant comments about Swapnil’s nationality?

That being said, I will grudgingly admit that Blake’s dress came out much better than I had anticipated. It had texture and movement, it looked like real fashion, and the detailing was quite incredible. He’s not going to be able to get away with overdosing on pink and glitter in every challenge, but it certainly worked for this one. And can I just comment on the complete absurdity of the judges saying that the designers used too much glitter? It was a GREETING CARD CHALLENGE. Anything more than a basic white card is probably gonna have some fucking glitter on it. Morons.

I like Candice. And not just because her haircut is REALLY cool -she’s also got focus and a clear point of view. The silhouette here isn’t particularly innovative, but I loved that she made her unconventional material look like an entirely DIFFERENT unconventional material (paper that looks like metal) instead of attempting to turn greeting cards into fabric in the span of a few hours. This garment had sex appeal, which is a pretty huge accomplishment under time and material constraints. It didn’t blow my mind, but I think Candice may be one of the few who shows us consistently strong work throughout the competition.

It’s a shame we didn’t get to see more from David, who I think has a creative mind. But gurl, if you don’t follow the rules, you get cut. It’s as simple as that. This was not my least favorite look on the runway, but I’m a stickler for the rules, so I’d have auf-ed David for this as well.

Kudos to Edmond – it was supremely ambitious to attempt a wedding dress in a one-day unconventional materials challenge. So ambitious, in fact, that I immediately thought he’d shot himself in the foot. But he was smart enough to incorporate the Hallmark logo about a zillion times on his bodice. He knows the game well enough to understand that the judges would be forced to give him the win no matter how awful his garment was, just to make the sponsors happy. And this was a strong design, but the judges happily ignored the glaring execution problems with that skirt once the Hallmark logo made dollar signs explode out of their eyeballs. I was impressed, but not quite as impressed as the judges.

Awful. Can you even believe they put Amanda in the bottom instead of this pile of garbage? First of all, once Ashley said this looks like a vagina, I absolutely could not un-see that. This is straight out of Georgia O’Keefe’s scrapbook. But I’d be happy to forgive the Sapphic nature of her print if it didn’t have the worst construction out of any garment on this runway. And it’s not as if she attempted a complex silhouette and failed – she attempted the most basic shape imaginable, and STILL failed. I’m sure Gabrielle is a darling person with plenty of skills that just aren’t aligned with this show’s challenges, but it’s only episode 2 and it’s already long past time for her to go home.

This had a strange, conceptual, quiet brilliance to it that I really appreciated. I loved when the model took the card out of the envelope holding her lapel together, and posed with it like it was a clutch. And she really made this paper look like one unified textile instead of a zillion envelopes glued together. Pretty impressive, Han.

Do you think he added a foot of hair extensions to that ponytail just to hide the awful construction in the back of that skirt? Honestly, if so, kudos to him. He was safe, so it clearly worked. But still, this skirt is a straight-up nightmare. He attempted the same method of working with the envelopes as Han, but look how much more tortured his garment looks than hers. They’re light years away from each other.

This was the most wearable look out of the bunch. I’m fine with it being safe, since the silhouette was so incredibly basic, but the flapper feel of it was a blast.

The clear winner, in my opinion. I have a bit of a crush on Kelly, who I call Michelle Visage in my head. She’s from Boston, but she’s got a 90s Jersey mallrat feel to her that I can relate to because of my decidedly Jersey upbringing. And she’s clearly got an eye on the future of fashion. The old farts on the judging table were clutching their pearls at the idea that someone besides Katy Perry would actually wear this, but I absolutely do not think you need to be a pop star to pull this off. Crop tops are everywhere, and this crop top is straight-up phenomenal. The textile she created – I can’t even believe how chic and seamless it looks. And I’ve seen a million girls in skirts just like this one – they just happened to not be made of paper. So I don’t know where all the judges’ hoity-toity bullshit was coming from – this look was about as good as you could hope for under these circumstances. Congrats to Kelly, my new favorite.

This has a quiet, understated elegance to it that is incredibly hard to achieve with this material. Lindsey’s aesthetic may be a bit too soft-spoken to do well on this show, but I thought there was a lot to like about this dress. It certainly didn’t look like every other garment on the runway. I like that she used cards and envelopes in a way that made them look like structured seaming. That elevated this look in a major way.

I forgot this one existed. It’s pretty much the definition of a safe unconventional challenge dress. Some construction issues, but nothing disastrous; just too simple a concept to really stand out.

The top half is phenomenal; the bottom half is so hideous it actually pains me to look at it.

To me, the top and skirt are from completely different outfits, but I can’t pretend that embellished skirt was anything but awesome. I adore it. Swapnil scored major points because his outfit was probably the only one that fit like actual clothing – the top and the skirt are both magnificently fit – but I’d have saved the tippy-top spots for the designers who created a head-to-toe vision of a woman. This lady’s top and bottom halves are going to two different parties, and that seems pretty inadvisable to me.