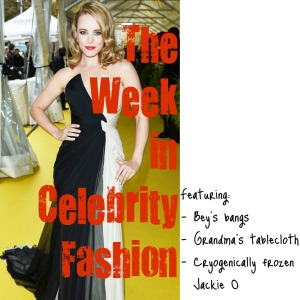 Welcome back to your regularly-scheduled bitchfest, dear readers!.

You WORK that Marilyn Monroe shit, Rachel! I am eating this up with a goddamn spoon.

I’m not usually a fan of center-slits. (Did that sound sexist? Let me clarify: vaginas are awesome. Center slits in dresses, less so.) But the rest of this silhouette is making me overlook that detail. The asymmetry, the strap, and the shape of the belt make this look like so much more than just another red gown on the red carpet.

Weird, ultramodern, and impossibly chic. It’s the Nicole Richie special. Also, I never knew it until now, but I cannot live another day without a pair of cranberry velvet pumps.

She really shines in jewel tones, doesn’t she? First the sapphire suit/ruby slippers combo, now this gorgeous emerald blouse? I approve. Also, I would like those pants immediately, if not sooner. If they make the 5’1″ Nicole look statuesque, they might elongate my 5’0″ frame too.

Delicate, romantic, feminine, and flattering. The seaming in the bodice is terrific, as are the sleeves. The white purse is a little glaring, but overall, I’m on board.

I love that color. I’m going to call it “dusty eggplant,” even though that sounds mildly disgusting. I’m not sure basic black accessories were the best choice, but they’re not particularly offensive. The gown and lipstick alone are enough to carry this look.

The texture of that dress with the leather-and-studded shoes is a GENIUS combination. It’s not even funny how many kittens I would punch in the face for a pair of Valentino “Rockstud”s.

EMMA STONE on The Tonight Show with Jimmy Fallon
top and skirt by Proenza Schouler, shoes by Kurt Geiger

This looked perfect on television. The short skirt made her legs go on for days, but it was still long enough that she could sit (and even lay down) on the couch without showing everyone her business. And the red pumps brought a bit of fun and attitude to the proceedings.

I’m now convinced Jackie Kennedy never actually died – she was just cryogenically frozen and perfectly preserved and unleashed onto us in the form of Amal Clooney. YOU CAN’T FOOL ME, SCIENTISTS.

I’m about a week away from being completely sick of those sheer panels (“you think my top/skirt/sleeve is over? WELL, THINK AGAIN! HERE’S MORE FABRIC AN INCH LATER!”). But as of now, I’m still on board, because this is cool as fuck.

Nope. This jumped straight from “cool” to “grandma’s tablecloth after the cat got to it.”

It’s a good dress, but Jaime’s styling has always been a problem. Gold accessories with a bright yellow dress just don’t really work for me, and her severe-as-ever hair and makeup are still not helping. Also, save the big hoop earrings for street style and less formal events. With a dressier outfit, they feel much more dated.

When I’m rich enough to be able to get my roots touched up every few weeks, this is the hair color I will have. I am fully obsessed with this shade of red. Anyway, the top and skirt are beyond awesome (and would fit fabulously into my wardrobe, which is full of plaid, if sadly empty of Dior). But I don’t think the shoes needed to incorporate yet another print. This would have been a good place for the Stuart Weitzman “Nudist” sandals that every celebrity is in love with, and the simplicity of that shoe would have helped the purse pop a little bit more.

I fucking adore Krysten Ritter. I think she’s hilarious in every show I’ve ever seen her in, and she’s got a personal style I can get behind. The dress is awesome (those cap sleeves! be still, my heart!), and the not-quite-matching gold pumps work surprisingly well with it. It’s the giant black purse I can’t get behind; not with such a delicate lace dress.

I’m still on board with the Dolce & Gabbana key print, but that’s got a shelf life of about another two weeks before I turn on it.

Oh, Blake. It’s comforting to know that even her impending motherhood can’t change her into someone who’s either stylish or willing to hire a stylist. Nope, she’ll be wearing too many cocktail rings and too-giant earrings and keeping her mouth inexplicably open all the time until she’s a thousand years old.

I feel like I’m supposed to like this more than I actually do, but it’s just missing something for me. Maybe it’s the stupid hair, or the lack of a silhouette, but I just feel like this dress is almost as boring as Sienna Miller herself. And that’s saying something.

I love Kiernan Shipka more than life itself, but I hope she outgrows Tory Burch soon. There’s nothing wrong with this; it’s just that she can do SO much better.

BEYONCÉ KNOWLES in London
top and skirt by Tanya Taylor

Say what you will about Bey’s hair – I for one think it’s just lovely that she let Blue Ivy cut her bangs for her.

Look, I love my stretchy black Lulu Lemon headband more than life itself. Nothing else controls my sweaty fly-aways when I’m jogging, or keeps my hair off my face when I’m taking my makeup off. But I’m not about to wear it on the red carpet. Because I’m not insane.