The Challenge: By far the worst episode of every season is the inevitable “make activewear for Heidi’s BS line of yoga pants and tank tops” challenge. It inspires no creativity in the designers, most of whom are making workout gear and using stretch fabrics for the first time. There’s just so little they can do within the parameters of performance wear, particularly when the designers are limited to the truly hideous fabrics in Heidi’s line. This challenge always makes for bad television and the world’s most forgettable runway show. Adding an obsctacle course for the designers to humiliate themselves on didn’t help. Anyway, the so-called winner gets their look manufactured and sold with Heidi’s line o’ spandex crap. Woo-freaking-hoo.

Oh, and Tim Gunn wore a referee outfit. Because Lifetime refuses to stop finding ways to humiliate this poor man.

Guest Judge: Michael Kors was the guest judge, proving that even the producers knew how goddamn boring this episode would be. Why else would they choose Michael as the guest judge for a yoga pants challenge? They needed his bitchy one-liners to help the audience forget that they were watching a 90-minute Heidi Klum for New Balance commercial. And while Michael did give the producers what they wanted, with lines like “It looks like she’s going to a buffet on a cruise,” and “She pooped her pants,” I also felt he crossed the line into offensive, body-shaming bullshit when he commented on one outfit looking like a “fat girl eating a cookie.” This may shock the fashion crowd to their very core, but it just so happens that non-model-sized women can be interested in fashion and have hobbies beyond cookie dough. These judges get further and further removed from reality with each passing season; comments like this just prove that they don’t know much of anything beyond clothes. (And Heidi clearly doesn’t know much about that, either.)

The photos don’t show the model wearing the adorable asymmetrical jacket, which was colorblocked as nicely as the rest of the outfit. I can’t feign too much enthusiasm over a sports bra and yoga pants, but this is cute enough, well-made, and flattering, with a fun 80s vibe.

Alexandria was a complete moron to think that she could get away with another pair of dropped-crotch pants. I liked her first pair from a few challenges back, but dropped-crotch WORKOUT pants are not a thing, and should not be a thing. The jacket is fine, but that’s the most I can say for this look. And as the commenters have noted, this model has been on the bottom an awful lot. It’s not solely her fault – the designers haven’t been doing her any favors – but she’s a pretty depressing person to watch come down a runway, isn’t she?

The only remotely interesting thing on the runway. So of course, it didn’t even make the judges’ top three. Can you feel me rolling my eyes from all the way across cyberspace, dear readers? I hope so. 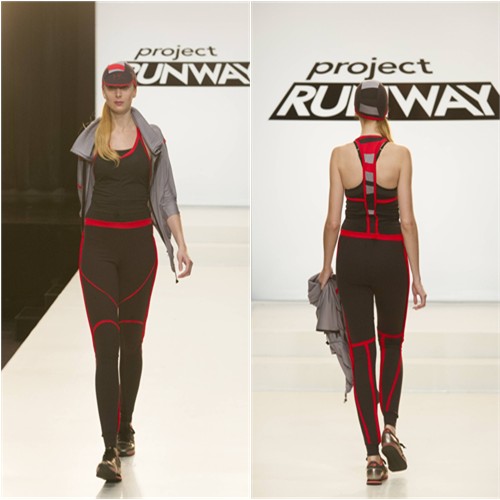 I liked the red piping in front, but in the back, it got too be way too much. The construction in the back of that top is problematic, and those lines need to be perfectly executed in order to look good. At least this had a little attitude – as one of the designers remarked, this model is definitely going for a run in Brooklyn – but it wasn’t one of Dom’s stronger entries.

Do I just not get Helen? Do I just have some sort of mental block against her? Or are the judges smoking more crack than ever? Because I cannot begin to understand the stupidly huge amounts of praise she’s received from the judges for the past two challenges. I thought this was depressing, shapeless, uninspired, and completely forgettable. Yes, I do like that Helen actually thought about a woman’s body and what she might want to cover up at the gym – Nina went apeshit for the jacket covering the model’s butt – but what about this is so spectacular? Or even better than average? 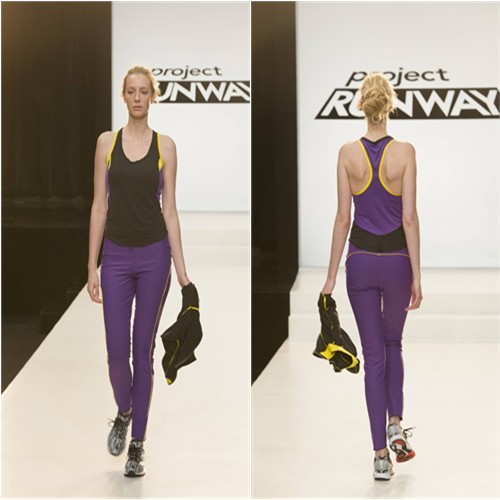 A whole new level of hideous. The purple stretch fabric is awful enough (blame Heidi for that), but the stretching across her crotch is a mess, and the tank looks poorly constructed from the front.

Surprisingly chic and fun. Way too much booty showing for a pair of shorts you need to be able to work out in, but otherwise, a very solid entry. 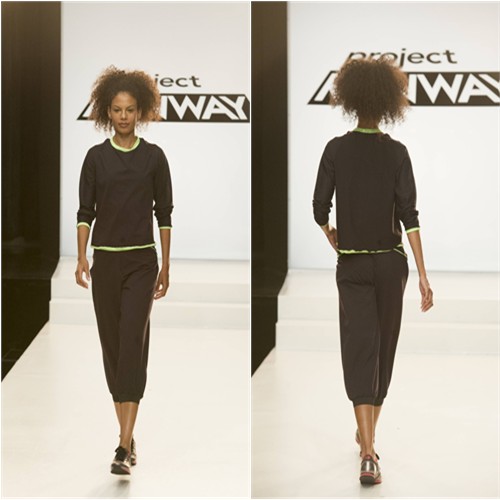 Poor Karen had to start her look over with only four hours left in the workday, after Heidi trashed her first design. I’d feel worse if it were anyone else, but while Karen is shockingly sweet and normal for a reality TV competitor, she’s never really had the chops for Project Runway. I’ve had her in the bottom for at least half the challenges, even if the judges have been more willing to ignore her. Her auf-ing wasn’t a surprise to anyone, but there’s still plenty of chaff to eliminate – Ken, I’m looking at you.

Cute pants, and the jacket is a good idea, even if it’s a little lacking in construction. The red piping on the pockets and the pant legs looks very nice.

There’s no design here whatsoever, because Ken spent most of his time in the workroom having a complete tantrum over Helen not telling him the question she had asked Tim in the workroom. Because, you know, this is Project Runway: Kindergarten Edition. Ken is an insufferable psychopath with little to no design skills; I’ve been sick of him for weeks, and I can’t remember a single interesting garment he’s made. Judges, please send this whiny little child home where he belongs so the real designers can get back to work.