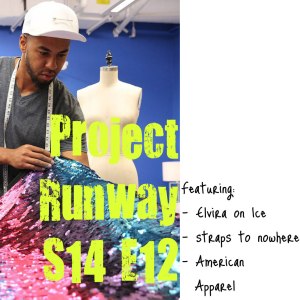 The Challenge: The designers were shipped off to Los Angeles and tasked with designing red carpet looks inspired by LA. The contestants had $400 and basically no constraints, and once again, no one really stood out for me besides good old Kelly from the Deli. Honestly, I felt that the challenge was a little weak – the LA inspiration didn’t end up mattering much at all, and it would have been fun to see a creative twist (not a time constraining one) to really push the designers to their limits. Instead, they churned out mostly-mediocre red carpet gowns.

Guest Judge: Christian Siriano, who they must have paid major bucks to show up, because he’s way too famous and successful for this guest judging shit now. But of course, knowing the ins and outs of the show made his input invaluable. Let’s keep the relevant and talented judges coming!

What was I supposed to like about this again? The fabric, which only looks a hair more expensive than American Apparel? Sorry, but that’s not enough for me, not with the fit issues and the strap to nowhere. Ashley has proven time and again that she works very well inside her little box, and very poorly outside it.

Cheap and boring. I don’t know why we had to watch an hour of Edmond just TORTURING himself over how and whether to cut this fabric. The drama the producers were desperately trying to wring out of that situation was just torture to watch. Regardless, Edmond deserved the auf for this disco ball disaster, but I’m sure the Tim Gunn Save will be unleashed to save him in the next episode.

As per usual, Kelly made the only cool thing on the runway. It’s not perfect – where her textile meets at the crotch is kind of strange, and the seam up the model’s butt isn’t particularly attractive either. But it was lightyears ahead of what her competitors brought (or failed to bring) to the table. I love the textured print Kelly created. And I had to laugh when Edmond was all, “HOW COULD ANYONE DREAM OF WEARING A JUMPSUIT ON THE RED CARPET?” He has clearly not been paying attention to the red carpet for the past five years. But Kelly has, and her little jumpsuit worked perfectly for the challenge.

Also, Kelly realizing mid-sentence that she’s making it sound like she owns the deli, when she actually just makes sandwiches = priceless. I am HERE for that shit, dear readers.