END_OF_DOCUMENT_TOKEN_TO_BE_REPLACED

Grab your leopard-print snuggie and a bottle of wine, bitches, ’cause this could take awhile.

I’ve been trying for days to like this dress, and I just can’t. It just looks like melted-down solo cups. The texture is horrible, and those cones on her boobs are absurd. That blue might be one of the best colors I’ve ever seen on the red carpet, particularly with January’s coloring, but even that can’t save this hot disaster. And that hair? If you want to have sex in the limo on the way to the Emmys, more power to you. But that does not give you license to have sex hair on the red carpet. Your all-American beauty looks will only take you so far, January. They may get you an Emmy nomination, but you won’t get this Diva’s approval until you learn how to dress.

My sister Haley brought up an intriguing question to me today: Does Christina Hendricks have an unusually small head? Or, as I posited, is it merely that any head would look tiny atop those giant hooters? Just something to think about. Regardless of the answer, Hendricks is rocking this dress. Totally unusual color, and it complements her hair beautifully. Redheads always rock green and purple outfits, and Miss Joan is no exception. Loving how this dress cinches her waist, shows off her ta-tas without looking vulgar, and then gets all soft and billowy and feathery at the bottom. I think there’s a little too much length at the bottom, but it’s a small complaint. And the sleeves are to die for.

Beautiful, simple, and classic, just like Elisabeth Moss herself. The draping is incredible, the color makes her glow, the shoulder piece adds a little intrigue, and I even like the train (and I hate trains). The bling is AMAZING – those bracelets are seriously opulent – and nothing’s better than that sassy little smile.

You can take your Bettys and Joans and Peggys, but Sally Draper is the real deal. That dress is precious, the hair is awesome, and my ten-year-old self would have killed for those little tiny high heels. Also, her name is Kiernan Shipka, which is awesome.

It’d be fine without the awkward stripe down the middle. It’s a perfect cut and color for her, but I wish it had some more intrigue and complexity other than the stripe, which is just not particularly beautiful. But the hair is amazing.

This just has too much going on. Less is more, people, and those ruffles over her boobs are just masking Julie’s beauty. This bitch doesn’t age, and has the hair and skin of a freakin’ newborn, but I look at this photo and I only see fabric, not the fabulous woman underneath it.

This is incredibly mature (but not aging) for someone as young as Sarah Hyland, who plays Claire and Phil’s oldest daughter on Modern Family. And she is rocking the hell out of this dress. The fabric is so luxe, it looks like liquid. It also makes her look about six feet tall and totally stacked. The braided/twisted straps are a dream, and the hair is perfect. I hope she doesn’t end up doing crack in five years.

And our favorite middle child is also nailing something chic beyond her years. I could do without the Bat Mitzvah hair and the embroidery on the bodice, but I’m loving the black-on-blue skirt and the funky, stylistic draping.

Easily the best dressed of the night, Claire Danes proves that simplicity is the name of the game. This dress is phenomenal and it fits her like a glove. I love that the color is just a sparkling version of her own skin tone. I may prefer her with bottled-red hair and flannel shirts, but I will always love Angela Chase.

Hello, gorgeous! This was my other favorite gown of the night. Not every designer can take a 5’2″ girl and make her look statuesque, but of course Oscar can! The color is amazing, the gown is divalicious, her jewelry is awesome (I bet we’re going to see knockoffs of that necklace EVERYWHERE), and this bitch knows how to POSE. The hair could have been a little more formal, but that’s my only complaint.

Jayma’s beautiful, but this dress is Lea’s dress’s less hot little sister. The jewelry is tacky and her hair is a mess. 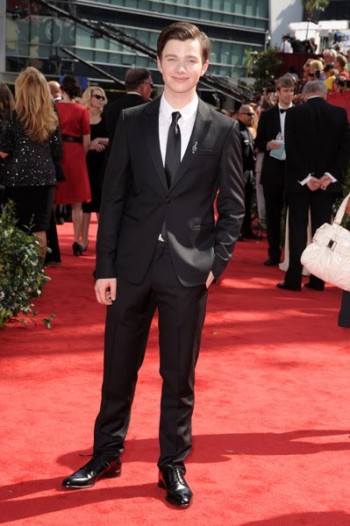 The cutest little queer on two legs. LOVING the treble clef pin on his lapel!

Work it out, Quinn! Black and pink lace together is one of my favorite things on the planet, especially in formal wear. Gorgeous dress with perfect hair and makeup to boot. But she does look a little sad, especially for a ridiculously hot girl on a hit Emmy-nominated TV show. Maybe she’s sad because she’s secretly in love with Matt Morrison, who is over her right shoulder, staring at her shoes instead of her ass. He’s a closet case, honey. Move on.

Brittany pulled out all the stops, rocking some serious old-school Hollywood glam. Very impressive for such a red carpet newbie! The makeup artist was a little heavy-handed, but the hair is flawless. 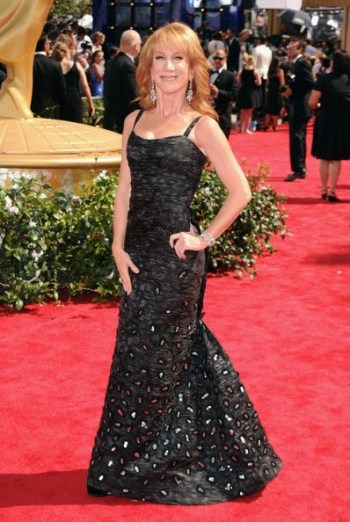 Holy couture! Kathy Griffin’s body has never looked better, and it takes a confident bitch to rock Oscar with that much certainty. Get it, girl.

Amy Poehler gave birth THREE WEEKS AGO and already looks this good. We should all be so lucky. The color is gorgeous, her tits look amazing, and she’s allegedly wearing half a million dollars worth of Stephen Russell jewelry, though I can’t really see much of it.

I could do without the hieroglyphic print, but for a woman who never looks comfortable in a dress, Tina is posing the hell out of this Oscar gown. It’s incredibly flattering to her figure, and it’s much funkier and fancier than she usually goes. It’s curve-hugging but not tight, and the hair and makeup are looking beautiful. Kudos to Ms. Fey for taking a fashion risk and finally having it pay off.

I think Elvira wore this to her high school prom. The shoes are cute, but that hair is much funnier than this season of The Office and this haphazardly-draped crinoline disaster is no better. And a petite girl should know better than to wear a dress with such wacky proportions that ends in the middle of the calf. Unless you’re a supermodel, that’s going to make you look stumpy.

Awful print, stupid belt, poorly fit, and stupid shoulder ruffles. Plus I don’t like the hair or makeup, and the purse is too busy. Fire your stylist, Kristen.

New Diva on the Block Award

Last I checked, Nina Dobrev was just another teen mom on Degrassi, and then she was just another teen vampire on Vampire Diaries, and then suddenly she was KILLING IT on the red carpet and performing in the epic Emmys opening number alongside the Glee cast, Tina Fey, Jon Hamm, Betty White, and the rest of TV’s elite. I can’t even believe how stunning she looks. The dress is borderline bridal, but it’s exquisite. The draping at the top is actually breathtaking. The hair is classy and glamorous, and those earrings were the perfect choice. Keep it up, Nina! Looking forward to seeing what else you’ve got.

NPH’s suit is beyond chic. It seems men fall into two categories: basic boring suit/tux, or trying and failing to spice it up. Neil Patrick Harris, of course, is classy and stylish enough to pull off a funky suit and just look even more dashing. And David looks adorable, as always.

Nope. No. Just… no. Your puke-colored, flowered and rhinestoned dress should not have love handle cutouts.

What part of wearing a purple hairy tiered gown appealed to Emily? Because I think she needs to seek mental help.

Sometimes I forget my pants in the limo too, Steph. It happens.

Lo Bosworth thought she was dressing like Mad Men here. She didn’t get the memo that a dress that looks amazing on a 1960s secretary in an office does not necessarily look awesome on a 2010 red carpet. She looks like she’s off to a business lunch, not an awards show. And that skirt should be about four inches shorter. The shoes don’t go, she’s wearing a stupidly large number of rings, and the hair is so bad, it’s almost funny.

For the love of God, just go be with your children and leave us all alone.

I love a girl who’s loyal to a designer, especially McQueen, but there’s a time and a place, and this ain’t it. The armored top looks insane, and the skirt is totally wrong. Way too many bracelets, and no hair style to speak of.

We get it, Heidi. You like short dresses. But you’re also not 18 and while I’d never tell a woman who looks as good as you that she needs to cover up, this shtick is getting a little tired. It’s not that you’re too old to wear dresses that show your cooter – it’s that your vagina must be tired of all the attention, because we’re tired of seeing her. And is your hair in a flip? The same style that all the boys in my middle school were rocking circa 2001? Because it didn’t work on them, and it sure as hell doesn’t work on you.

—
Later this week: Your weekly fashion recap (cover all things non-Emmys, from red carpet to editorials and more) and of course, your weekly Project Runway recap! Follow @democracydiva on twitter for updates.