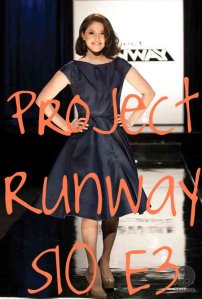 I had a travel-filled weekend, dear readers, so I apologize for the delay in posting this. I hope you spent that extra time encouraging the Project Runway judges to seek help for their crack addition, which is clearly back in full force this season.

The Challenge: In one day, create a red carpet look for a former Project Runway designer to wear to the Emmy Awards.

Guest Judge: Krysten Ritter. She’s adorable and all, but the producers could have picked literally any actress on earth to guest judge the Emmys challenge, and they chose one who’s never fucking been to the Emmys. Presumably so that she wouldn’t have a strong opposing opinion to the judges, because she’d be defaulting to their more experienced knowledge of the Emmys. I see right through your manipulative tactics, Bunim/Murray. You can’t get SHIT past the Democracy Diva.

And while I’m ranting about the producers, I’d like to say something in defense of these designers and the utter garbage that walked the runway during this episode: Nobody can make an Emmys gown in twelve hours. I understand that time constraints are part of the challenge and part of the entertainment; however, when the time constraints become literal impossibilities, the entertainment factor drops down to almost zero. Why? BECAUSE EVERYTHING LOOKS LIKE SHIT. For the love of God, producers, stop trying to film the whole season in two weeks because you’re that fucking cheap, and give them more than a day to make a look that an actual person needs to wear to the Emmy Awards. Consider this your last warning.

Sad as I was to see Raul go before he really had a chance to show us anything, this was definitely a bottom-two look. Hideously unflattering, terribly constructed, and an extremely poor fit. It’s clear Alicia and Raul had next to no idea what they were doing, but I don’t think it’s a fair critique to say, “You should have made a suit.” If an Emmys gown is impossible to make in twelve hours, how the fuck do they expect someone to construct sleeves and pants, which take infinitely longer to make than dresses? Don’t get me wrong – I’d love to have seen a suit made by Alicia and Raul. I think they could have come up with something forward-thinking and interesting for Mila. But don’t put the blame on them for not making a suit instead – they had to have known they’d never come close to finishing it.

At first, I went back and forth over whether this look was actually worse than Alicia and Raul’s look, but I have to choose this as the ultimate loser for one reason: THEY MADE ANYA LOOK FAT. Say what you want about her (I sure as hell have), but she’s thin and beautiful to the point of absurdity. If you can make a woman this gorgeous look this bulky and hideous, you’ve got no business stay on this show.

I usually hate discussing inter-team drama, which I consider by far the least interesting part of the show, but Andrea’s cavalier attitude throughout the challenge was offensive, and Christopher was right to be pissed about it. (That’ll be the last time I defend Christopher’s pissiness, so I hope you enjoyed it.) The end of the episode revealed that after Raul’s elimination, Andrea snuck off and left the show in the middle of the night. We’ll wait til next week’s fallout to go into detail about that, but I saw a lot of hate directed towards Andrea, for allowing Raul to be sent home over her, and then quitting later that same night. In her defense, she tweeted during the episode, “They cut out so much! I said send me home!” No way to know if that’s true, but it’s something to consider before sending her any hate-tweets. Regardless, I’d have sent her home over Raul in about a heartbeat.

I hope L’Oreal loses customers because of what their stylist did to Laura Bennett’s beautiful red hair. And a high, frilly neckline with Laura’s severe features and distinguished chin was definitely not the best idea. Furthermore, this might be the ugliest color I’ve ever seen on the runway. I believe this color’s official name is “Week-Old Bruise,” but “Diseased Feces” might also do the trick. But those problems aside, this was probably the best-constructed and best-fit dress to come down the runway. The striping effect actually looks quite chic, and although I’m not okay with Elena putting linebacker shoulders into virtually every outfit she makes, I think they work in a gritty-meets-pretty sort of way.

This had a few too many construction issues to merit a spot in the Democracy Diva’s Top 2, but it was probably the only look on the runway that actually looked like an Emmys gown without also looking completely derivative. The hemline is a mess, and the seaming in the back is puckering and too tight around her butt, but it’s chic and at least sexy from the back, even if it’s a bit matronly from the front.

Remember when this piece of shit made it into the top two? Yeah, that was a crack-induced judging decision if I’ve ever seen one. Are we seriously just going to throw Gunnar into the top every single week, regardless of what he does, simply because he’s so revoltingly obnoxious and unbearably irritating that the producers are willing to fellate him on the runway? I swear to you, I almost spat at the television when the judges didn’t ask (or, when the editing didn’t show the judges asking) to see the back of the dress, which is where the majority of the hideousness took place. I mean, sure, that hemline is a complete disaster and the dress has virtually no design to it at all save for a collar that came from the accessories wall. But I get the very strong feeling that those two hideous drapings in the back are hiding an even more hideous seam, don’t you?

By far, this was the most Emmys-appropriate dress on the runway. It’s also a dress I’ve seen thousands of times before, and it’s not particularly flattering. Lord only knows what’s happening in the back around the waistline. That arrow pointing to her ass isn’t exactly flattering, but the bunching fabric is a real eyesore. Had I been able to distinguish this gold gown from any number of gold gowns I’ve seen on a thousand different starlets, this could have been a top entry, but zero points for originality means zero love from the Democracy Diva.

Yes, this is lovely, well-made, and reflective of both Ven’s design aesthetic and Kenley’s sense of style. (But Fabio needs to get some credit for his work on the dress – just because Ven’s a talented egomaniac doesn’t mean Fabio sat around all day with his thumb up his ass while Ven sewed his fingers to the bone.) It’s one of the only wearable things on this runway: for that, they deserved the top spot. But let’s not pretend anyone would actually wear this to the Emmys, because it’s not an Emmys dress. It’s a really lovely cocktail dress, perhaps even a bridesmaids dress for that rare bride who doesn’t believe bridesmaids must look hideous to make the bride prettier by comparison. But the overpraise Ven’s been receiving from the judges is already grating; I’ll be sick of their love for his beautiful, albeit simplistic designs by next week.