Welcome back to the runway, dear readers!

The Challenge: Armed guards show up dramatically to present over $30 million worth of jewelry. In one day, the contestants must create looks to complement the incredible jewels. Since the designers are managing their own budgets this season, they have $4,000 total to spend for all the challenges, but can spend as they please. (The producers helpfully gave them a “recommended” budget of $300 so that the stupider designers will still have fabric left at the end of the season. No more vaginas exposed on the runway!)

Guest Judge: Gossip Girl costume designer Eric Daman. Smart to get someone experienced in dressing extraordinarily wealthy characters for this challenge! Let’s see more of this kind of judging panel, and fewer reality stars I’ve never even heard of, okay? 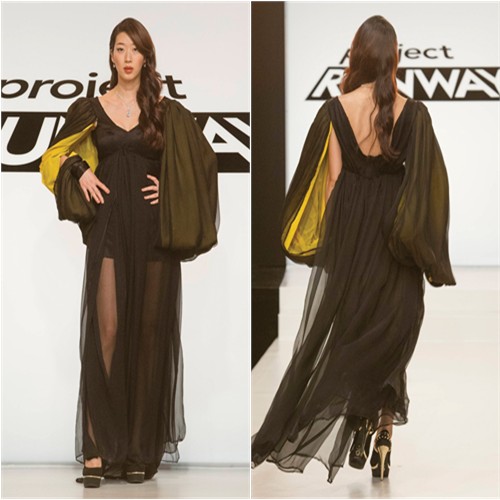 This look had a lot of beautiful movement on the runway that doesn’t show up in pictures, but it was still decidedly middle-of-the-road. I know Ginger Dandy’s goal was to make a dramatic garment, but those giant sleeves and all that movement might have distracted from the necklace instead of enhancing it. So I’m not sure it was a wise move for this challenge.

The draping in the front of this gown is expertly done, though the fit in the back leaves a lot to be desired. The navy color is beautiful, and that luxurious fabric was worth every penny she spent on it. And the gown is simple enough to let the jewelry do the talking, which is kind of the point. But what this gown lacked was originality, which is why I agreed with the judges leaving Alexandria’s look in the “safe” pile.

This was the clear winner, as far as I was concerned. I knew the judges wouldn’t give Bradon two consecutive wins in the first two episodes, because they need to show the rest of the designers or we’ll forget about them entirely. But his gown fit all three of my criteria for the win: it was well-constructed, it showed off the jewelry brilliantly, and it didn’t look like a thousand outfits I’ve seen come down the runways before. The fabric is stunning, just beautiful to look at, and the athletic silhouette at the top and the black trim give this a sportier, more modern vibe. The super-low, straight across backline is surprising and sexy, and even the little shawl was just lovely. 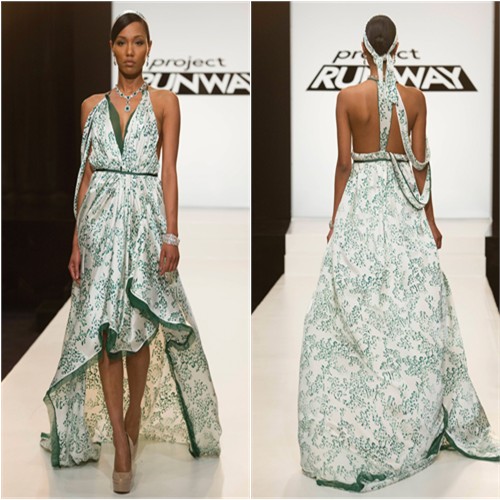 This was well-thought out and fresh and interesting, but the green trim on the bottom cheapens the look substantially. She was one of the few designers who built her look around the necklace, which was important, and I did like this look, but the construction is lacking.

Helen was smart to play the dramatic card as hard as humanely possible, just to make herself memorable enough not to be eliminated. I mean, the show made it appear as if they stopped the entire runway show before Helen’s look to let her have a complete breakdown. A crew member ran over and gave Tim tissues to give to Helen in the most staged-looking moment in Project Runway history. Obviously they weren’t going to eliminate a drama queen like her, not when they could manipulate her tears into such quality television! Sigh. Anyway, this gown was atrocious, and everybody knew it. But I’m not actually sure it was the worst thing on the runway.

When the model walked down the runway, she sort of looked like she was surrounded by smoke, which was a fun effect. But in photos, you can see that this is just a boring jersey dress with some tulle tacked onto it. And the model shouldn’t have to be pulling the dress up to be able to walk down the runway.

Beautiful and dramatic, yet simple enough to show off the jewels. I loved the construction of the bodice, which was incredibly flattering, and the touch of blue fabric in back to bring out the sapphires in the necklace was brilliant. It wasn’t quite as original as a few of the other looks, but this still would have been in the top for me. Also, Justin taking off his hearing aid so he didn’t have to hear the other designers bitching at each other was beyond hilarious.

This wasn’t good, but it wasn’t close to the worst thing on that runway. 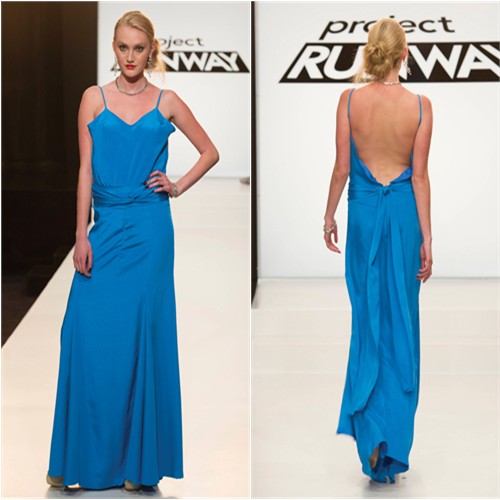 I have to say, I think this dress is worse than Helen’s nightmare of a gown. At least Helen attempted something, even if she bit off about a thousand times more than she could chew. Karen came up with an incredibly simple concept in a terrible color, and executed it so poorly, I still can’t believe she didn’t even make the bottom three.

One of the designers called this a Vivienne Westwood knockoff, and I could not agree more. And it looked absolutely hideous on the runway, with those crooked, puckering lines going up the corset. Her boob appeared to be jumping through the television screen, she had giant pouches over her ass. I have an endless amount of complaints about the construction, and the idea lacks any originality. How that ends up in a win from the judges, I’ll never know.

Another one who can’t seem to make an original gown, and can’t seem to construct it properly. Also, we’re like, done with peplums as a society, yes? At least on runways and red carpets? 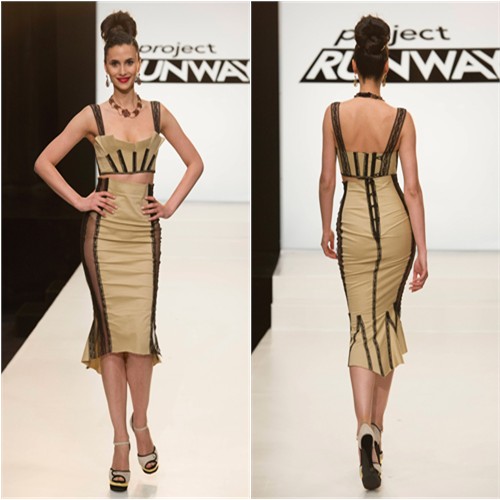 Please. She looks like the mistress of a Russian mobster. The man can sew, but he’s got no taste whatsoever, and the sheer panels on the sides were beyond tacky. He also had a complete tantrum over a steamer, dragged a crew member into the workroom to scream at him and make him fix the steamer, and the crew member promptly ran away. I’m already exhausted with Sandro’s shenanigans, and he hasn’t even punched a camera yet.

Sue, I’m starting to think you can’t do anything but rouching. Please come up with a new technique for the next challenge. Also, the neckline of this dress doesn’t work with that necklace at all.

Timothy made a point of telling us he wasn’t inspired by the jewelry, because money doesn’t inspire him and diamonds are superficial. But of course, there’s nothing superficial about whoring yourself out on reality television to earn half a million dollars worth of prizes, right, Timothy? There really is no end to this kid’s stupidity. Anyway, his racer-front gown was ill-conceived and poorly constructed, and as the judges pointed out, that blue fabric sucked all the color out of the necklace. I’m more sick of Timothy than anyone else on the show, but while this was bad, Helen and Karen both made worse looks.