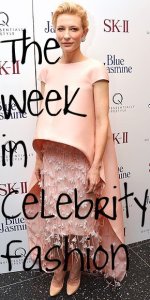 Welcome back to your regularly scheduled red carpet recap!

Cate Blanchett made an epic return to the red carpet after months of me longing for her unique style. She did not disappoint in her blush cape and floral-embellished matching dress. The shoes are almost old lady-like, but the rest of the look more than makes up for that. And those earrings are killer.

This dress has a lot more detailing than you can actually see in the picture. And she might be wearing peep-toed pilgrim shoes, but she’s kind of pulling them off. Even when she dials it down, Cate keeps things so fresh and fabulous.

You go and get it with your red suit, honey. This is delicious.

The dress could be an inch shorter and I’d have preferred shoes in literally any other color, but this red embellished dress is fantastic on her. And the jewelry? This Dame is not fucking around.

RUTH WILSON in London
dress and shoes by Christian Dior

British actress Ruth Wilson is unknown to me, but she’s working this incredible Dior dress like her life depended on it. I can’t decide if the shoes are amazing or if she looks like she’s trying too hard. I think cleaner hair and makeup would have brought this look to the next level – as is, it’s a lot to take in, but at least it’s memorable and surprising.

VANESSA HUDGENS in London
suit by Moschino, purse by Givenchy, shoes by Joe’s

I love this suit. I have faith in you yet, Vanessa. Don’t disappoint me.

It’s not my personal style, but it’s a good summer outfit, and she’s in Italy in July. When near Rome, wear white crop tops and nude strappy sandals, I always say. (I have absolutely never said that before.)

Underwhelming. Not bad, just not particularly memorable. And the fit is shoddy and the look doesn’t really suit her, like she pulled this dress from another starlet’s closet.

I like the gray color she’s wearing, and the purse is cute, but she could have used a pop of color somwhere. The shoes would be fantastic if everything else weren’t gray and shiny too.

I’ve seen this dress a few too many times before, and Jessica is in desperate need of some jewelry. But those shoes are absolutely lovely, I have to give her that.

This could have looked amazing if it were a size bigger and actually fit her. And I know white pumps are all the rage right now, but they don’t work with this graphic, sporty little sheath.

Love the dress, but I hate Miranda’s makeup artists. She always looks so much more beautiful in street style shots, where she’s wearing less makeup.

That purse is incredibly tacky, and the shoes are just distracting. They’re pretty fucking awesome in their own right, but they don’t work with the rest of this look at ALL.

I love everything about this dress except the strip of sheer black fabric at the bottom, which looks like it was tacked on as an afterthought. The shoes are cute, but I’m not sure they’re really right for this dress.

Every individual piece she’s wearing is fantastic, but together, these proportions are a hot disaster. The crop top’s sleeves end at a weird place, the skirt starts too high and hangs too low, which makes the platforms with the double-ankle strap look strange. Oh, and that purse is stupidly long.

This would be awesome if this dress fit her, and if no one let her wear that lipstick ever again. Love the shoes, though!

I like to reward creativity, but this looks like an outfit a kindergartener would wear. Because they made it themselves.

Selena, you’ve worn too many dresses like this before. And you need to fire your makeup artist immediately, because nobody should be allowed to do that to your pretty little face.

Oh, Joanie, no. That top is mumsy and sad, and the neutral-toned makeup is too light in contrast to the black outfit. She needed more color somewhere to look a little less ghostly. Those naked shoes make her look like she’s barefoot with terrifying pointy hoof-feet.

This might actually be the most boring woman in Hollywood. Don’t get me wrong, Jennifer Aniston gives this one a run for her money, but good LORD, is this fucking dull.