Get in, losers – we’re going glamping.

The Challenge: Over-use the phrase “glamping” while camping in the wilderness, getting inspired by nature and the way Ken screams like a baby while on a zip line. The designers had one day and a suggested budget of $300 to try and look at Tim Gunn wearing a camouflage suit without cracking up. It was their hardest challenge yet.

Guest Judge: Girls star Allison Williams. I swear I don’t really dislike her, but she is so boring, I don’t even remember her being the guest judge. 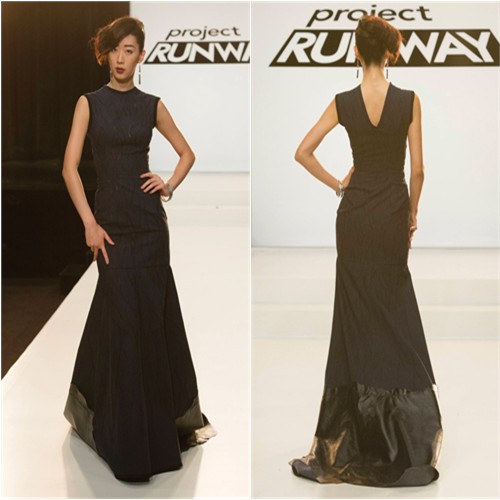 It’s a little difficult to see the intricate black-on-navy pattern embroidered throughout this dress, but it was very nice work. However, I felt the train in the back was in too heavy a fabric, weighing down the back of the dress. It’s surprisingly toned down for our Ginger Dandy, who tends toward the dragtastic in basically all of his looks, but it wasn’t quite original enough to warrant a spot in the top three, as far as this Diva is concerned. 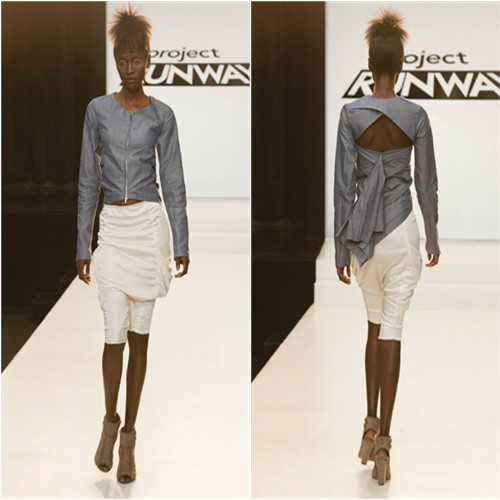 Alexandria made the impossible happen – she made jodhpur-shorts lovers out of Zac Posen, Tim Gunn, and the Democracy Diva. I must finally have acquired the same crack the judges have been smoking, because I thought this was editorial as hell (gaining the Nina vote), sexy (the Heidi vote), and not a copy of a million other things we’ve seen on the runway before (the Zac vote). But it wasn’t just fodder for the judges – it’s a modern, expertly constructed look that shows Alexandria’s point of view. I think she’s joining Bradon and Dom as one of the ones I’m rooting for to get to the finale.

This is so terribly hideous that I’m just going to assume Bradon had a minor stroke in his sleep and call this an outlier. Let’s pray for a return to form next week.

A fantastic print, a weirdly fashionable collar (I love the purposeful asymmetry in the back), and it moved like water, which was the point. This would have easily sailed into the top three for me.

The effect in the skirt is very cool, but the color is just so terrible and depressing, it erases any potential this gown had. Also, she needs to consider making something besides a corset eventually. 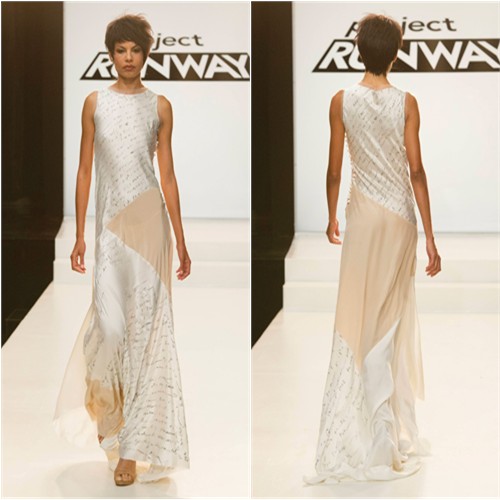 A relatively simple gown, but the love letter Jeremy printed onto it makes it beautiful and memorable. Not fashion-forward enough to take the win, but definitely lovely to look at.

This is the gown that made Nina Garcia say the phrase “foaming vagina,” and the world was never the same again. To be honest, this is a dingy, depressing, ugly gown, even though the way he made a lace pattern out of hot glue was sort of brilliant. But after the judges eliminated him and the contestants all started weeping, Tim Gunn saved Justin from the auf. Justin absolutely seems like one of the nicest, sweetest people this show has ever seen, mostly because this show mostly sees self-absorbed lunatics, but also because he’s just a good soul. But I can’t say I approved of Tim using the save because a designer is too nice to be eliminated. I would have saved it to use for someone who has shown a great deal of promise from the beginning (Dom, Bradon) and clearly has what it takes to win this competition. 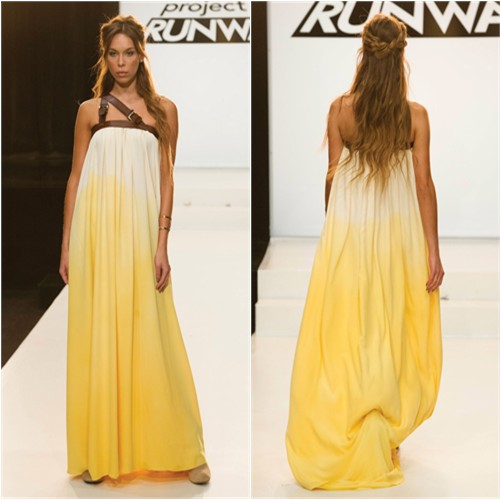 This is better than Justin, but not by much. Karen’s been on my list for elimination since the beginning, so unless she makes a miracle happen next week, I think she’ll be the next one to go.

Oh, good. Because every gal wants to wear what appears to be a crooked piece of armor over a giant cupcake. What am I even looking at? And why are all of these models wearing the same terrible pair of shoes? Come to think of it, have we seen anything off the Belk accessories wall that isn’t terrible or completely unremarkable?

He really believes he made a keyhole in the back, but that’s actually what it looks like when you can’t get your damn zipper all the way up. And nothing else about this dress had much going for it. Ken’s got an incredible amount of attitude for someone who has yet to design anything worth discussing.

Definitely the best thing Miranda has made so far, but it’s still an incredibly simple silhouette, and the fit of the top is problematic. But the treatment on the skirt moved beautifully, and I felt the nature inspiration of it, so that’s something.