It’s cocktail hour, dear readers. Grab a drink and meet me on the runway.

The Challenge: The designers are told they get a night off to drink at Jay Z’s 40/40 Club, but obviously, there are no nights off when you’re an All Star. Alyssa shows up at the club and tells them to choose a cocktail, pay attention to how the bartender constructs the drink, and created a cocktail dress inspired by the drink. The designers have one day and $100 at Mood to make this happen, and for an extra twist, they have to make a “garnish” (that’s pretentious for “accessory”) as well. After the runway show, once she’s confirmed that there are at least a couple of wearable looks in the mix, Alyssa agrees to wear the winning look. (I love that the standards have gotten so low that no one will agree to wear the winning look until after they’ve seen it.)

Christopher’s cocktail was called “The Rose,” but rather than recreate a literal rose, he thought about romance and what the woman drinking The Rose would wear. His resulting dress was certainly as sexy and romantic as he could have hoped for, if a little underwhelming in terms of color. On my television, this read as more of a lovely ivory, but in pictures, it looks a little yellowed, which I’m not enjoying nearly as much. But the bejeweled straps in the back were really stunning, and he made something truly expensive-looking, which was more than what most of his competitors accomplished. But does anyone know what the accessory he created is supposed to be? I mean, unless he cobbled those shoes himself, I don’t actually see any “garnishes” here. Maybe the bejeweled straps are supposed to be the accessory? Even though they’re part of the dress? Help me out in the comments, dear readers.

First of all, these pictures don’t do this dress justice at all, because what made this dress beautiful was the seaming, which is completely invisible here. When you can’t see the incredibly well-constructed, supremely flattering seams, this dress looks a lot more ordinary. And the lack of visible seams makes me notice things I missed on my TV screen, like how those cut-outs are just a little bit shabby-looking. I also have no recollection of what this had to do with Elena’s “Sardinia” cocktail, since this looks like twenty other dresses Elena has made. That’s not to say I didn’t love it when it hit the runway – I did – but Nate Berkus’s comment that he’s seen this dress from Balenciaga and Narciso Rodriguez was spot-on. That is how I’ve always felt about Elena – too many of her best looks are too derivative.

Also, no one is carrying that giant-ass purse to a cocktail party. #garnishfail 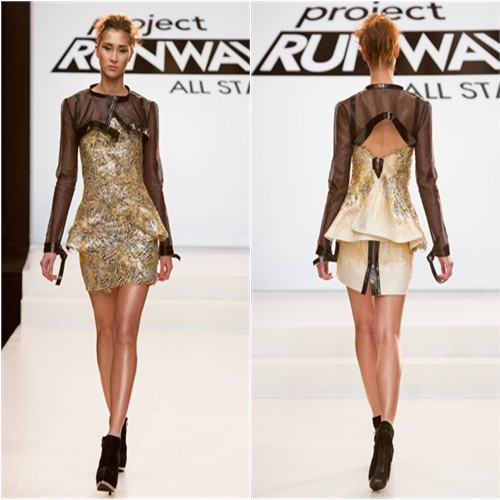 I think there’s a few too many ideas here, and I think we’ve all seen enough peplums to last us until the next millennium, so this didn’t really do it for me. The shrug is distracting, especially with those strange straps hanging off the cuffs. And would you ever even imagine that this was inspired by a drink called “Strawberry Fields”? 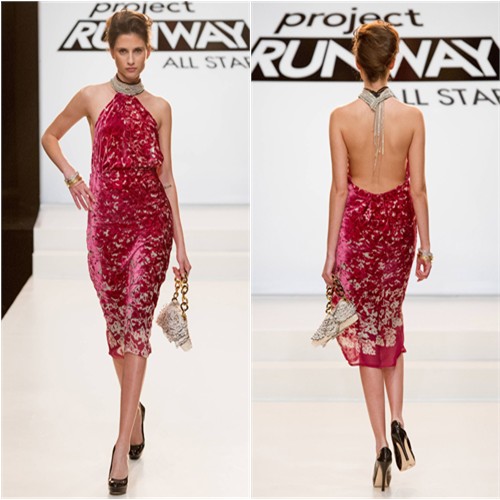 Jeffrey thought this was “Le Exotique,” but I thought it was ill-fitting, old-fashioned, and incredibly underwhelming. This is a better fabric for a pillow than a dress and that purse is the saddest little thing I’ve ever seen. Jeffrey might as well have sent his model down the runway naked save for a sign that says I DON’T WANT TO BE HERE ANYMORE. Let’s show this boy the door already.

Love the fabric; hate all the black embellishments. I think the way she trimmed only the middle part of the neckline in black is ridiculously unflattering and distracting. I think the straps in the back are too tight, and I think the harshness of that shiny black fabric on top of an already-loud print makes for something pretty unwearable. I love Korto, but this dress was a disappointment for me.

I’m loathe to agree with Christopher, but Melissa really has made this dress over and over again. Of her repeat dresses, he squealed, “This bitch is swindling us! Get her!” which was torturously over-acted but nonetheless accurate. Her “Sunset” dress is reminiscent of basically everything she’s ever made – asymmetrical dresses that aren’t particularly well-executed or thoughtful. I don’t think this was worse than what Jeffrey sent down the runway, because I think there actually is a market for something like this. But I understand why the judges would want to get rid of Melissa when she’s only got one trick up her sleeve. 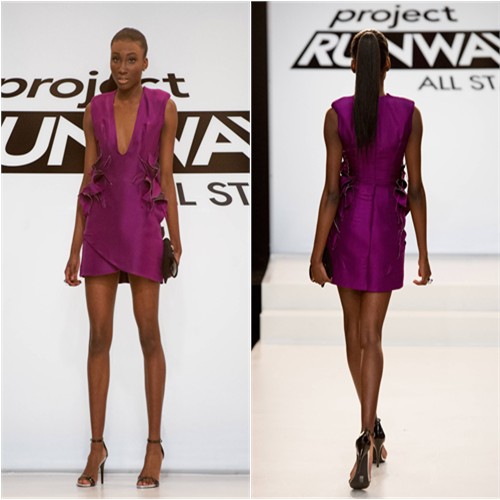 Mychael’s “Spotted Plum” dress was downright boring. He’s lucky there were hotter messes afoot, because this was way too safe.

Somehow, this is inspired by a drink called “The Hemingway.” (I don’t see the link either.) I actually think this is a very cute and wearable outfit, but it also was a bit shockingly underdesigned, especially for Seth Aaron. And it didn’t look nearly expensive enough to wear to a cocktail party. It’s short, and it’s black, and it’s got boots, but that doesn’t actually make it cocktail attire when the fabric and cut read as daytime.

I fully agreed that Viktor’s “Tiger Eye” design deserved the win. I can’t even believe he was able to create something this beautiful and interesting in one day. The cut-outs in front and back are absolutely expertly done. The sleeves are adorable, and the print is used thoughtfully and beautifully. Now, how a woman with actual, non-runway-model breasts could wear this dress, I’ll never know. I’d have a nip slip in this thing before I made it into the party. But for the A-cups of the world, this is quite a look.