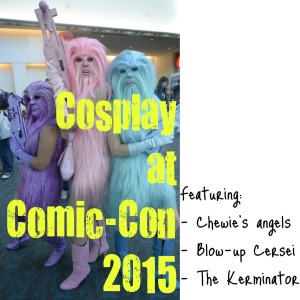 Since the Comic-Con red carpets are always basic as fuck (every starlet in a crop top, I’m looking at you), let’s take a look at the REAL Comic-Con fashion.

GO HOME, ALL OTHER CON ATTENDEES. YOU CANNOT EVEN DREAM OF DEFEATING CHEWIE’S ANGELS. JUST LOOK AT THEIR BOOTS. EVERYTHING ABOUT THIS IS JOY.

I am fully obsessed. Also, good to know that all you need to pull off green skin is excellent muscle tone.

The Night’s  Queen, Game of Thrones

I wish she were in “come at me, crow” pose, but this is undoubtedly cool as fuck. And cold as ice. #PUNS

I have had the luxury of being up-close and personal with many Frank N. Furters of equal and better fabulousness than this darling gentleman over the years, but I understand not everyone is as privileged as I am. So, enjoy.

There were ten thousand Furiosas to choose from, but this is the only one I kind of want to date.

The eyes have it.

Queen Cersei and her “shame” Septa, Game of Thrones

Shout-out to my friend Patrick, who sent me this picture and basically demanded that I do a cosplay post. I obviously agreed, because the only thing more hilarious than dressing up as Cersei’s “shame, shame, shame *ding*” septa is having a blow-up doll play the role of Cersei.

The Mad Hatter, Alice in Wonderland

Okay, I guess any steampunk enthusiast with a few dollars in their pocket can make a Mad Hatter moment happen, but I still loved this.

I’m almost positive she was on Season 7 of Rupaul’s Drag Race. And she should have WON.

All of my favorite non-Game of Thrones costumes involved some kind of crossover magic. These geniuses who combined Frozen and Mad Max? I’m voting for them for president.

As a Jersey kid who was practically raised on Kevin Smith movies, I laughed at this for WAY too long.

Beyond fierce. I would be Rufio for Halloween, but, you know, I would look racist as fuck.

I hope you two grow up to understand that your parents are the coolest nerds in the whole goddamn universe.

Hodor and Bran, Game of Thrones

Doc Brown and Marty McFly, Back to the Future

The McFlyest family in town.

Honestly, anything comic-y mashed with anything Disney is a recipe for cosplay success.

I don’t even know who the fuck these characters are and I still love them.

Sauron, Lord of the Rings

There’s so many details to love here, but I think the bedazzled belt might be my favorite part.

Flawless idea; perfectly executed. I want to carry this kid around in my pocket.

Yes, that is Brienne of Tarth and Shae, with their dogs, Jaime and Tyrion Lannister. NO ONE IN THE WORLD HAS EVER THOUGHT OF ANYTHING THIS BRILLIANT BEFORE. THIS IS DISCOVERY-OF-PENICILLIN-LEVELS OF GENIUS.

And a bonus puppy close-up, for the road:

All dogs must bark.

5 responses to Cosplay Realness at Comic-Con 2015