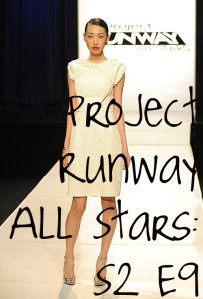 The Challenge: The designers must create a ready-to-wear look for the Elie Tahari customer. The garment needs to be simple enough to fit within a budget so that it can be profitable selling at $500-700. The winning look will be sold in Elie Tahari stores and online, with proceeds going to Save the Garment District. The lucky designers get to choose fabrics right from the Elie Tahari studio itself, which was incredible, as was the value of having both Elie himself and Joanna mentoring the designers in the workroom.

Guest Judge: Elie Tahari and his beautiful Israeli accent. Oh, and Stacy Keibler, who is famous for being George Clooney’s arm candy. I’m insulted by the fact that the producers expect me to believe that anything this woman says about fashion has any value whatsoever, particularly when she’s stealing screen time from the brilliant fabulous Mr. Tahari.

You know what? I’ve spent every single damn post this season talking about how overpraised Anthony Ryan’s work is, and I honestly have run out of ways to say it. The only thing more boring than watching the judges cream their pants over him week after week is probably reading my complaints about the judges’ love for him week after week. So before I completely lose my damn mind, let’s just call this overpraised and move the hell on.

Beautiful, but far too simple for any sort of design competition, even if you’re trying to make something wearable and cost-effective. I don’t know why everyone hated on the color – I think that yellow would be terrific on almost any dark-skinned woman, even if pale girls like myself couldn’t rock it nearly as well. It just felt like the judges were saying, “Well, I wouldn’t look good in this color, so it must be bad,” and I found that kind of offensive. I think the silhouette is flattering and the dress itself is extraordinarily wearable, but this felt like Emilio was phoning it in, or at least getting a little bit lazy with his designs.

Once again, Ivy took a beautiful fabric and did next to nothing with it. And when Elie Tahari is both your mentor, your judge, and the person who will ultimately be selling your look if you win, you BETTER DAMN WELL LISTEN TO HIM when he says to shorten the length of her dress. Her belief that the customer should purchase the long version and hem it to their preferred length was complete crap – the point of ready-to-wear is that it be READY TO WEAR, after all – and I just can’t imagine the stupidity or ego it takes to flat-out ignore what Elie Tahari tells you to do. Between that, and Ivy’s constant string of bottom-three designs, it was more than past time for her to get the auf.

Uli was terrified that sending down another white dress would mean the death of her, but when each of your little white dresses are unique and delightful, there’s little to fear. I’d have awarded Uli the win for her beautiful, versatile design. The judges were right to marvel over its versatility – they like to pretend everything can transition from day to night easily, but this little dress really can. Elie loved the way she used the fringe at the sleeves, and I loved the flattering darts in front and back that created a great shape. The waistband, the texture of the dress, the length – I’d kill to wear this dress, and I imagine a lot of ladies feel the same way.