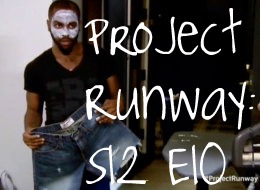 They say a picture is worth a thousand words. So a picture of a man-child in a facial mask ironing his jorts on the brink of a complete emotional breakdown must be worth a few million, right?

The Challenge: Eight Project Runway “superfans,” who are probably the eight most endearing people to ever appear on this show, show up to the workroom to receive makeovers from the contestants (but mostly from the Loreal hair team, who did all the heavy lifting in this episode). Ken looks like he’s going to vomit when the ladies walk in, and confesses, “I’ve never sewn for real women before.” Really? Because I’ve begrudgingly spent the last ten weeks watching you sew clothes and then put them on human females. But the fact that he and the Lifetime team consider actual clothing consumers as some sort of unfamiliar exotic species says pretty much everything we need to know. (And don’t worry, we’ll get to his temper tantrum meltdown later.) Anyway, the designers are thrilled to have two days to create a new look for their superfan clients. And most of them were supremely psyched to work with people who had such love for the show

Guest Judges: Designer Erin Fetherston, who injected the judging panel with a much-needed dose of youth and coolness, and Marie Claire editor Zanna Roberts Rassi, filling in for Nina. I like Zanna, but she’s no Nina Garcia when it comes to judging bitches. 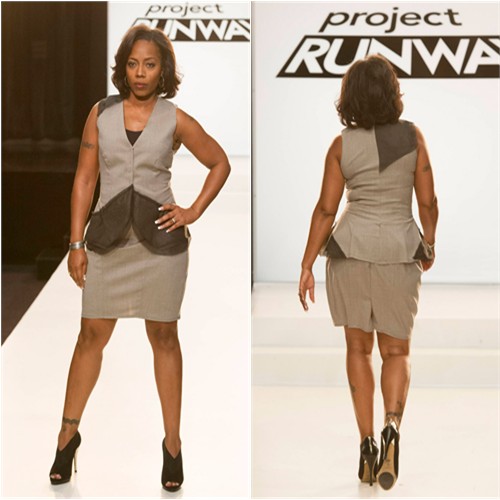 Alexander had a great concept, but bit off more than he could chew and ended up not being able to finish his look. His construction is usually pretty close to perfect, so it was tough to watch these poorly sewn garments come down the runway. His client had a metric ton of attitude in the best possible way, and he really did try to give her what she wanted. But it’s worth noting that even a not-remotely-finished look from Alexander is miles better than some of the other shloch on that runway (Ken, I’m looking at you.) 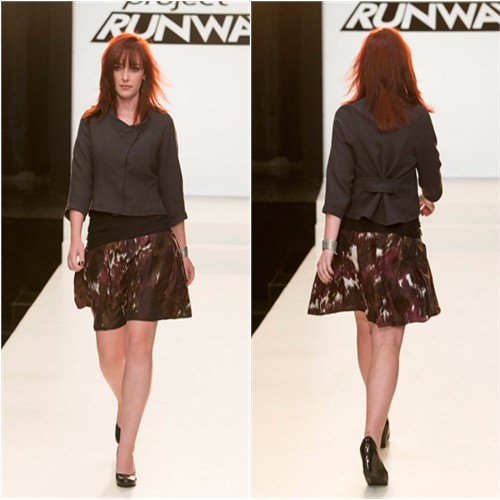 I don’t know why everyone hated on this look quite so hard, or why everyone considered it “matronly.” The judges have been in the fashion industry way too long if they think that a job interview outfit should show more skin than this. Don’t get me wrong, I don’t love this or anything, and I think it was a bit on the dull side, but everyone I know could use a skirt like that. And the back of that jacket is beautiful, though I’m not sold on the front. 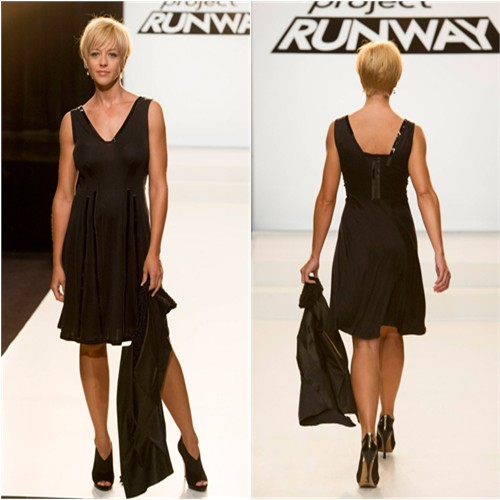 I couldn’t even believe what I was hearing when the judges over-praised this makeover. This client came in looking 20 years old, and left looking twice that age. The judges called the hair Mia Farrow, but I thought it looked much more like Kate Gosselin. We can blame the Loreal team for all of that, but Bradon is to blame for this really disappointing and equally overpraised dress. I thought this was awkwardly proportioned, boring, and not nearly as flattering as a good little black dress should be. This look slid into my top three by default, but the judges acted as if it had some measure of brilliance to it, and it most decidedly did not. 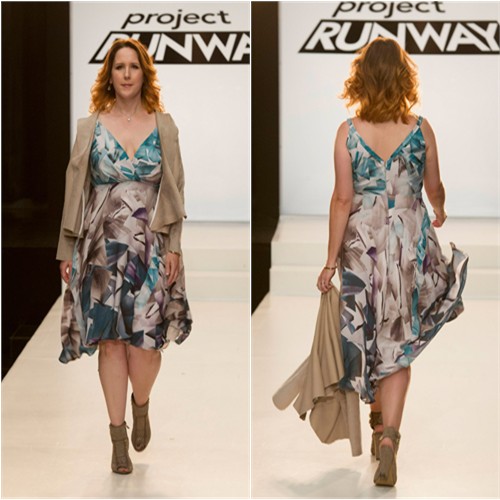 That shrug was one of the most hideous, depressing pieces I’ve seen on this show in a long time. And the dress isn’t much better. I feel like I’ve seen designers use almost this exact print before, and equally without success. The construction is okay at best; it’s just not nearly as strong as so many of Dom’s previous looks. 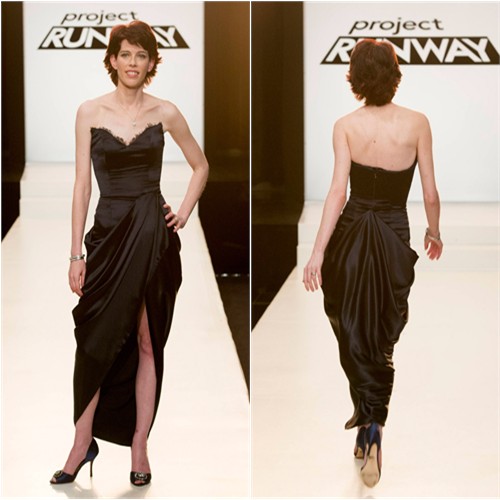 Now this was some fun television to watch. When this little nerdy flower of a woman walked into the workroom with her frumpy clothes and 80s hair, I knew there was a total knockout hidden just below the surface. The hair transformation was truly remarkable – so thanks, Loreal, for helping Helen win this challenge – but to see this lady strut down the runway with such confidence was actually really sweet. And this is the first thing Helen has made this season that I’ve actually loved; she’s won almost half the challenges at this point, but this is the first win that I agree with. It’s a fabulously executed, classic red carpet gown, draped beautifully and fit to perfection. 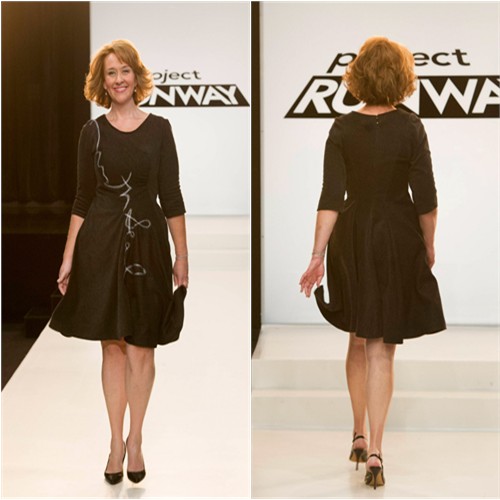 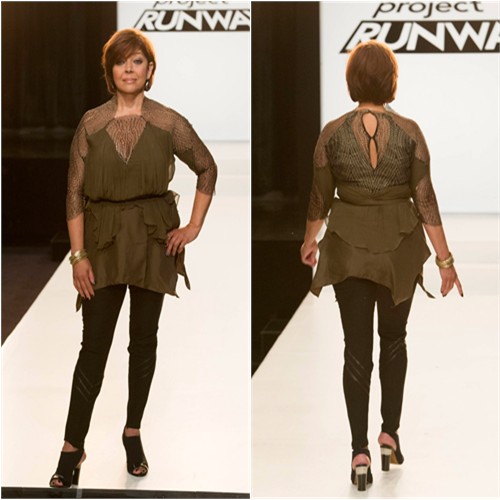 Peter Pan on a grown woman? Never going to work. And those cut-outs in the back are absolutely horrific. The judges need to put down their Kate-flavored crack pipes and realize that this girl sends some truly awful crap down the runway. 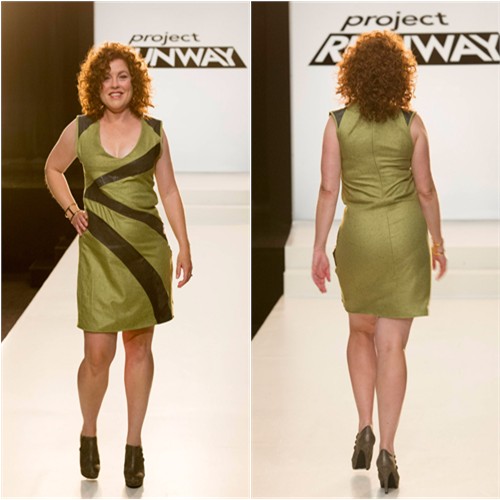 Now, let’s discuss the most disgusting temper tantrum ever thrown by a so-called adult in television history. Alexander and Bradon are moving in with Justin and Ken, because when half the people in the competition get eliminated, some shuffling of the living arrangements is required. This is obvious and self-evident to everyone on earth except Ken, who for some reason has a huge problem with this change. After what must be a 14-hour day in the workroom, Alexander and Bradon show up with their suitcases in tow, and Ken literally refuses to let them pass through the hallway into the room. He just stands there, in his face mask, ironing his jorts – that’s right, IRONING his JORTS – and refuses to move, blocking their path completely. Because he’s A COMPLETE AND TOTAL CHILD. Alexander did exactly what I would have done after an extraordinarily long and exhausting day, knowing that there was no talking to Ken when he gets like this – he simply knocked Ken’s iron and board out of the way and moved on in anyway. Ken and Tim acted as if this were some horribly inappropriate move, and while knocking over hot irons isn’t a great idea in general, I can’t imagine anyone doing anything differently under the same circumstances. Anyway, Ken starts to completely lose his mind, and we meet Megan the Talent Coordinator, who with utter resignation and exhaustion in her voice, begs Ken to calm down. (It was actually hilarious how monotonous and deadpan her voice was; like she has had to talk Ken down off a cliff every single night since this season started and couldn’t even fake enthusiasm for it anymore. That poor, poor woman.) He screamed – in her face – that he’s not about to change his living situation for nobody.

The next day, Tim tells Ken he saw the tape of what happened, and actually uses the words, “You had a temper tantrum,” which got a round of applause from me. After a let’s-sit-down-and-talk-about-our-feelings-because-this-is-Lifetime meeting, Tim says they’ve decided to put Ken in his own room. Because rewarding children for their out-of-control temper tantrums is always a great idea, right? (Actually, I can’t fault the producers for that move – they knew he wouldn’t be staying in the competition another night anyway, and it was the only way to get him to shut the hell up for a few minutes.)

Two paragraphs I’ve dedicated to Ken’s absurd tantrum, and yet once again, his so-called fashion is barely worthy of commentary. He’s a less-than-mediocre designer with a borderline personality disorder, and I’m glad to see him go. But not as glad as I was when I heard the glee in Tim’s voice as he ordered Ken to the workroom to clean up his space. Never in the history of Project Runway has Tim Gunn sounded so happy to utter those words.