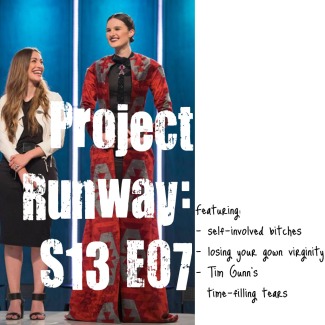 Diamonds! Tears! Even more Germans! Are you ready for the runway, dear readers?

Previously: No one had time to make anything remotely resembling a wedding dress, but Dita Von Teese was cool.

The Challenge: The episode begins with everyone talking about how much they love Char, which makes me happy. The designers are apparently not such soundbite-zombies that they don’t know an awesome, funny lady when they see one. But for some reason, the producers found it more dramatic to wait until after the challenge was assigned and have Tim cry in the workroom about how he cannot live with himself unless he brings Char back. (You know, instead of bringing her back at the beginning of the episode, like a normal thing.) I love Char and I’m glad she’s back, but please, no more of Tim Gunn’s Time-Filling Tears. And she should have been allowed to choose from the full array of jewelry like everyone else, dammit!

Anyway, the designers must choose a piece of ridiculously expensive Chopard jewelry and design an extravagant evening wear look worthy of a gala to show it off. (In one day. Don’t get me started.) Oh, and they take a field trip to the Charles James exhibit at the Met for extra fabness and inspiration. (Charles James was a master couturier and not, as Amanda said, “kind of punk rock.” He made extravagant ball gowns, for God’s sake. They were innovative and intricate and fascinating, but they were not “punk rock.” Does Amanda’s brother pay her royalties for every time she mentions rock music on this show, or something? Because it happens too often. )

Guest Judge: Caroline Scheufele, artistic director of Chopard, who was German and fabulous.

The execution on this thing was a mess, especially up close, but at least the front of it photographs phenomenally well. Sure, it’s a Vivienne Westwood knockoff, and the judges couldn’t see the necklace well enough from their vantage point, but Alexander came up with a mildly interesting, challenge-appropriate design. Almost no one else did. So, sure, his was held together with pins, spit, and a prayer, but it could have been worse, and too many of them were. The judges were all, “We can’t believe how amazing all your looks are!” I don’t know what show they were watching, but the best that can be said about this runway show is that there was no accidental nudity. Nowadays, that’s enough to make the judges fall all over themselves.

This was needlessly weird, completely ugly, and had fuck-all to do with the challenge. I don’t know how many times I can give you all the same Amanda rant, so I’ll just roll my eyes and move on. 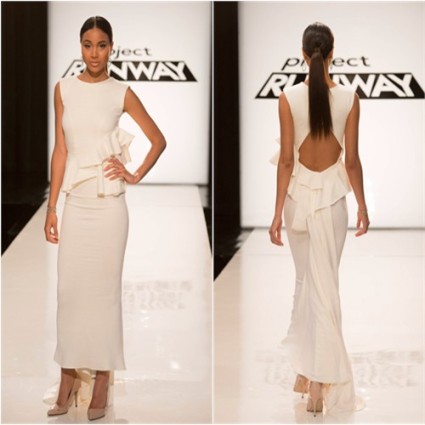 Char desperately needed to be safe this episode, and so she created something safe. It might not have made for a great runway look, but it was probably the smartest thing she could have done for herself in the competition. The ruffles were nice, and I liked the cut-out, but the length was a real issue. That fabric hitting at the upper ankle instead of grazing the floor – it just cheapened this dress so much. Had she crafted this in a more interesting fabric – maybe a metallic or something with a little texture – and fixed the length, it could have been a top 3 entry.

I think this is fascinating from the back and underwhelming from the front. The bodice just sort of hung there and wasn’t fitted well to the model’s body, but I am kind of obsessed with the vaguely sapphic draping in the back. That shit is gorgeous. But as the judges said, so much of this challenge is about fabric choice. And this fabric, like many others on the runway, just didn’t look expensive enough. Not for the jewelry, and not for a gala.

The silhouette is fabulous from the front, although I hate the draping and pinning in the back. And again, these fabrics read as sportswear, not luxe evening wear.

An ordinary and vaguely tacky design, executed terribly. And I’d be thrilled if I never heard the sound of Kini’s voice again. I don’t actually think Kini is that obsessed with himself, I think he just believes that acting like self-involved bitch will get him on camera more. And clearly – sadly – he’s right. But this dress was a full-on disaster. He’s lucky Sam didn’t design anything at all.

This was the only thing I really wanted to put in the top three. This was weird and dark and surprising, but still fit the challenge flawlessly. This coat is a work of art, her fabric choice was brilliant, the pockets are divine – I didn’t really know how talented Korina was until this challenge. Way to go, Jessa.

After way more than thirteen seasons of this show (including All Stars), I have absolutely zero patience for hipsters declaring, “I’ve never made a gown before.” I totally believe that it’s outside Sam’s wheelhouse to make a gown. But once you find out you’re going to be on Project Runway, and therefore know that at LEAST one challenge this season will straight-up require you to make a gown, YOU MAKE A FUCKING GOWN. Just for practice. Just so you don’t have to lose your gown virginity on four hours of sleep, in one day, surrounded by sociopaths. And for a first gown, this wasn’t actually that terrible. But she didn’t design much at all, and she didn’t make up for it with fabulous fabric choice or killer execution. So sad as I am to see her go, she did deserve the auf.

I am seriously in love with this dress. I’d love to see it on any starlet at a movie premiere, or hanging in my closet just waiting for a good enough excuse to be worn. But it has nothing to do with this challenge. At all. I really tried to stick to looks that actually worked for the challenge to fill my top three, but to be honest, this was the only thing I liked other than Korina and Sean’s looks. So it slid into my top three just because I want to wear it, and you, dear readers, will just have to deal with it. 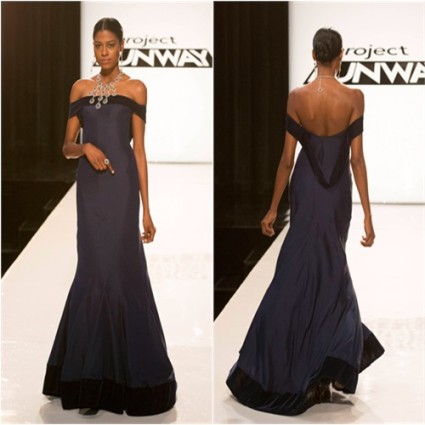 Ugh, I hated the way the model posed to show off that ring. Honey, we’ll see that rock from a thousand miles away – you really don’t need to keep your index finger pointed for the entire runway walk. Anyway, this was a good dress, but not the most interesting thing on earth. The velvet trim at the bottom was romantic and sweet, and it definitely fit the constraints of the challenge, but it just didn’t have the element of surprise that Korina’s had.