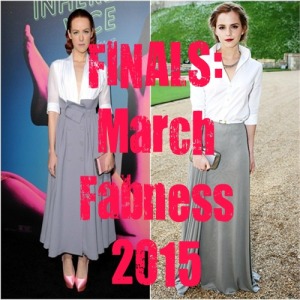 After eight weeks of grueling competition, WE’VE FINALLY MADE IT. It’s the March Fabness 2015 Finals, and only you can name the winner.

Jena: This is a trip. Can you even believe we’re here?

Jena: This is me, rolling my eyes at you.

Emma: This is me, rapidly running out of fucks to give.

Jena: She swears! Who knew Hermione could go so blue?

Jena: I don’t appreciate being COPIED, Emma. Also, your skirt is touching gravel and that’s gross.

Emma: It’s not a problem. I have someone on my staff whose entire job is to follow me around with a lint brush and a tiny little vacuum cleaner.

Jena: That sounds nice. I could use a personal drink-carrier when I’m wearing coats draped fashionably yet inconveniently over my shoulders.

Emma: Or when my arms are pinned to my sides by fabulous-but-restrictive sleeves! 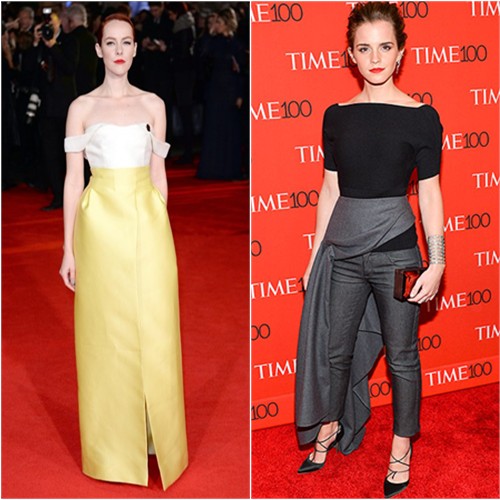 Jena: May I ask, what do you even call whatever is happening on your lower half right now?

Emma: I have no idea. They send me clothes, I put them on, I gaze into the middle distance, and I sell the shit out of them. That’s all I know.

Jena: I know my side-eye is facing the wrong direction, but I’m not quite sure you’re selling the shit out of this one.

Emma: NEVER. I am addicted to the Fabness, Jena. I cannot leave here empty-handed. 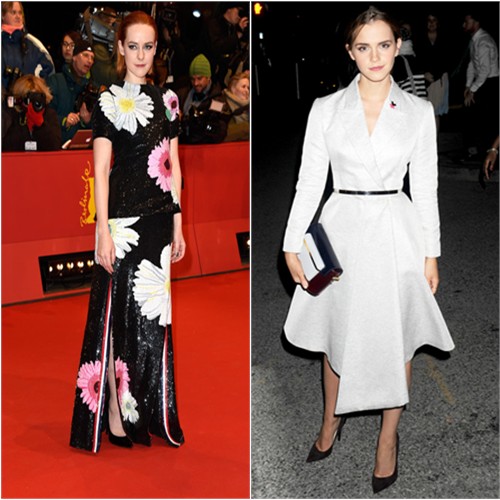 Jena: Well, then you probably should have had a mega-huge press tour this year like I did, necessitating lots of wildly glamorous gowns.

Emma: Eh, it’s okay. I look as good in a trash bag as most girls do in gowns anyway. If I’d had a Hunger Games-number of premieres this year, that would almost be cheating.

Jena: Well, it’s good to think highly of yourself, Emma. Now say goodbye, and hand over that trophy.

Emma: OVER MY DEAD BODY.