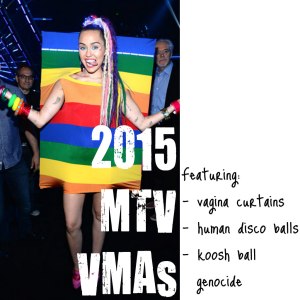 Welcome to the VMAs! I might be too old to watch them, but no one’s ever too old to judge them. Also, I think it goes without saying that this post is mildly NSFW, because, you know, Miley.

This is Human Disco Ball Miley. She is by far the most normal, and the least nude, Miley you will see at this event. (Spoiler alert: You will see ELEVEN Mileys at this event. I apologize in advance. Consider yourself warned.)

Wearing pajamas to the VMAs is by far the coolest thing Taylor Swift has ever done. At an awards show known for its scandalous nudity, what’s more shocking than super-fierce sweats? Plus, Taylor never had to worry about whether her nipple was going to pop out of her suspenders, a problem which occupied Miley’s attention for the greater part of the evening.

Good. I’m glad Hailee went the shockingly-not-nude route. She looks phenomenal – just weird and youthful enough to feel right for the VMAs, but mature enough to remind everyone that Hailee was nominated for an Oscar when she was fucking fourteen, and SO does not need to be here.

It’s a dress that’s just been done too many times before – haven’t Nicki, J.Lo, Rihanna, Beyoncé worn some iteration of this to every awards show for the last two years? It’s executed brilliantly, and Nicki looks fucking killer, but I can’t work up too much excitement. For her, it’s pretty expected.

Speaking of expected, did anyone even blink an eye when S&H&M Miley hit the red carpet in nothing but bejeweled suspenders? Anyone? I thought not. Love the boots, though.

Aw, she actually looks incredibly sweet. I may never understand what causes a person to want to wear a dozen bracelets and five necklaces, but her stupid faux hippie shit works very nicely here.

Her headline should just read, “Karlie Kloss wears flats; gives no fucks.” I love it.

I actually don’t hate this. I think the VMAs have desensitized me to complete wardrobe insanity.

These Pasties Will Haunt Your Dreams Miley.

If she tried half as hard, she’d look twice as good.

C’mon, lady! You wore a dress with penises on it to the Met Gala! I expect something COMPLETELY out of the box for the goddamn VMAs. This is just vaguely witchy and kind of awkward.

Would have been ranked way higher if she’d chosen a better shoe.

MILEY CYRUS
jumpsuit by The Blonds, shoes by Sophia Webster

She and her eyebrows can do no wrong, as far as I’m concerned. Cara continues to be that effortless kind of cool that makes Miley’s shenanigans seem extremely childish and desperate by comparison.

Proving The Point I Just Made Miley.

The pink in the hair should either match the skirt exactly, or be an entirely different color. And I’m not really sure what’s happening here, shape-wise. But it could have been pretty damn great without the silver trim, which cheapens the look considerably.

Hollywood desperately needs a 12-step program to wean starlets off of cut-outs.

Yet Again, Proving The Point I Just Made Miley.

Nope. Dress OR boots. Not both. Shame on you.

ENOUGH WITH THIS FUCKING DRESS. WE GET IT, MODELS. YOU UNIVERSALLY LOOK GOOD IN BLACK CUT-OUT GOWNS. NO SHIT. NOW WEAR SOMETHING INTERESTING ALREADY.

This woman can’t dress for shit. It’s actually kind of endearing. No one person should be get to be ridiculously beautiful AND married to John Legend AND actually know how to dress yourself. That would just be too much.

In The Postapocalyptic Future Brought On By Global Warming, We’ll All Wear Candy Miley.

I hate this so, so hard, you guys. Hair (dated; tacky), makeup (WHAT IS HAPPENING WITH YOUR BROWS, WOMAN), color (nope nope nope), silhouette (look, vagina curtains!) – it’s all wrong.

So drab and dull, it’s like she’s actively trying to not be famous anymore. You know, Selena, things like that are much more successful if you don’t, you know, ATTEND AWARDS SHOWS.