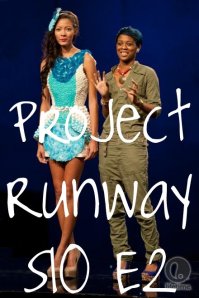 The Challenge: In one day, make a look out of $500 worth of candy from Dylan’s Candy Bar and try not to get diabetes.

I actually dig Ass-Length Dreadlocks’s little candy-coated romper. The bra part is clearly unfinished and unflattering, which took it out of contention for Democracy Diva’s Top 3 (a much higher honor than the Judges’ Top 3, as we all know). But I loved the weird, interesting shape of the romper and I thought the candy handiwork (candiwork?) was fun, fresh, and well-executed.

Andrea must have sold her soul to the devil to avoid being put in the bottom this week. She made a more boring, even more poorly executed version of this dress, which Tim rightfully tore to pieces. Then she cut it apart, regretted cutting it apart, had a mental breakdown, and sewed it back together into this tacky, hot disaster. I was in physical pain watching this monstrosity come down the runway, and when she turned around and revealed that circus tent bustle in the back, I actually gasped out loud. For me, this is one of the worst entries in Project Runway history – but I still think Lantie deserved the elimination.

I liked the idea of the bustier much more than the execution. Woven strips of sour candy sounds brilliant, and maybe it could have been if the execution had been better and if everything about the rest of the outfit were different. Because the judges were 100% correct about Buffi’s MAJOR styling issues. This is what a 5-year-old picks out at Claire’s; most of this garbage has no place on the runway, not even in a candy challenge. And if she thought that skirt was going to pass muster, she’s even crazier than I thought.

I didn’t think this was particularly great on the runway, but the more I look at it, the more I enjoy it. Other people did stripes of candy beading much more successfully, so he wasn’t worthy of the top, but he didn’t just rest on his laurels with his immunity. The front is a little too wide and heavy-looking to really be flattering, but I think the back of that dress is pretty fucking great.

This was the only dress that looked like a dress – you could see this girl at a club or on a red carpet and not ever know her dress was made out of candy. But of course, the top of it isn’t made of candy, which makes it less than worthy of the Top 3. But I love the beading and the flapper-fringe and the exposed zipper. Dmitry remains one of the designers I’m most excited to see more from.

Yes, this was a full-blown disaster, but there’s no way on earth it was worse than Andrea’s mess, so I still wouldn’t have placed Elena in the Bottom 3. But once your dress starts to disintegrate on the runway, I kind of lose sympathy. All falling Twizzlers aside, Elena needs to prove to the judges that she knows how to do more than one silhouette – her entries last week both featured those square linebacker shoulders. She also needs to prove she’s not afraid of color, as her love of black and beige will get exhausting fast.

Fabio was lucky that there was a metric shit-ton of crap on the runway, because this is hard to look at. It was incredibly stiff and heavy, though the rock candy part looks beautiful from the front. The sour straws worked as the collar, but they’re awful as the waistband, and even worse in the back. And is that skirt even made of candy?

Looks like everyone got the memo that Jillian Lewis’s twizzler corset was one of the best unconventional challenge looks in Project Runway history, and so attempted to make dresses out of Twizzlers with varying degrees of success. The checkerboard print is cool, and I like the closures in the back. But that peplum looks like a very sad afterthought to hide a poorly constructed seam where the top and skirt meet, doesn’t it? And you know Gunnar only made it to the top because Christopher won last week, and the producers need to keep shoving this obnoxious “rivalry” down our throats until I throw something at the screen and yell, “JUST FUCK ALREADY, WILL YOU?” (Which I did. I mean, I didn’t throw anything, but I did yell that at the screen.)

The front is awesome in an acid-trip way, but it was daunting to watch this come down the runway. Candy dropping to the floor with every step, the dress so heavy the model could barely move: Kooan remembered to have fun with this challenge, but kind of forgot to make clothes.

Congratulations – you made a halter top that makes the model’s breasts look like they hang down to her belly button, and a skirt that still looks like a fucking umbrella, and the world’s ugliest rubber booties. Add that to the fact that you completely gave up and thought you could outline a couple flowers in candy and still meet the parameters of the challenge, and I am simply thrilled to see you go home, Lantie. Good fucking riddance.

For all the fuss she seemed to be making over her amazing Twizzler bra, it looked like a cheap Halloween costume, and it was the only innovative part of an otherwise very boring outfit. If this weren’t rendered in badass black-and-metallics by a hot blonde girl, the judges would have laughed at how amateur this crooked crop top and miniskirt are.

This was one of those under-the-radar entries that I didn’t take much notice of at first and I’m now becoming obsessed with. The execution is nearly flawless, which is more than I can say for almost any other look on this sugar-coated runway. And the concept is fun and silly, and it’s rendered beautifully – what more could you want in this challenge?

This very, very nearly made my Top 3, because there’s so much construction, it’s almost entirely made of candy, and the execution of all that candy is pretty insanely perfect. I just hate the blue fabric he used as trim, especially in the back. The dress is overdesigned: The front cut-outs, stripes, flowers, and other detailing would be enough, but then there’s a thousand more design elements in the back, and the result is slightly overwhelming. But the fact that he can make sour straws look this chic impresses me.

The obvious winner, in my not even remotely humble opinion, was Sonjia’s innovative, risky, incredible dress. The dress looks like it was made out of sea glass and pearls, not candy, and that’s pretty exceptional. The shark candy collar is hilarious, but it’s that white and seagreen bodice, executed brilliantly, that really makes me swoon. And the rock candy skirt is of course adorable, though I wish he hadn’t repeated the shape of the flap in the back, where it looks a little diaper-esque. But I’m obsessed with the white collar on the back of the dress, and I’m just astounded by how chic and clean and elegant this is, while also being ridiculously exuberant and really fucking fun.

I knew the lack of imagination in Nina, Michael, and Heidi’s souls would cause them to pick Ven’s simple cocktail dress over the astounding oceanic candy adventure that Sonjia gave us. Don’t get me wrong, this dress is beautiful and wearable, and his use of Twizzlers to create a pattern with the rock candy was an excellent choice. But come on – this came nowhere near Sonjia’s level of innovation, technique, and creativity. Which is, of course, why the judges thought it was the best.