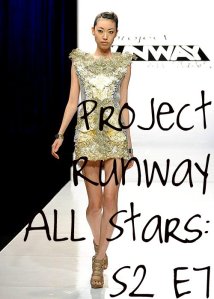 The Challenge: It’s finally time for the unconventional challenge – the designers must create looks entirely out of items found in a Christmas store. The twist? The resulting look should not actually look like it came from a Christmas store. (But like all rules, it didn’t seem to apply to Anthony Ryan.)

Guest Judges: Kylie Minogue (“SQUEEEE!” replied the gays) and La La Anthony, who I know virtually nothing about (and that’s after reading her Wikipedia page). But if Project Runway is this desperate for guest judges, I think I know a qualified Diva who’d happily step up to the plate.

I loved the double row of glass that served as the hemline, and I like that he continued it at the waistband in the back. Other than that, this was as overpraised as everything else Anthony Ryan has sent down the runway this season. It had some interesting elements, but I thought it was pretty damn clear this was made of Christmas decorations. And I thought the wings in the back were downright ugly. Of course, something needed to skate into the top three by default amidst all the hot messes on this runway.

Casanova was not particularly game for the unconventional challenge from the start. He doesn’t like making dresses out of “bullshit,” and I cracked up when he said, “What I can do? A live piñata, right?” Anyway, the result was poorly executed and kind of disjointed, with the bodice looking like an entirely different dress than the skirt. Kylie noted that the work on the bodice is reminiscent of Jean Paul Gaultier, and I don’t necessarily disagree. I didn’t necessarily think this was worse than Ivy’s look, but it was certainly worthy of the auf.

It looks like Emilio beat the hell out of this dress with a sledgehammer. The color is fantastic, but everything else is a mess, and he was incredibly lucky to escape the bottom three.

I hated the color, the proportions, and the mismatched keyholes. And unlike some of the other terrible looks, it was boring. To me, that’s a worse crime than anything else, particularly for the unconventional challenge. I’d just love to see what it looks like when Ivy actually has fun with her designs and stops taking herself so seriously.

Joshua’s bra – made out of a toy train! – is truly fantastic; it’s the reason Project Runway has the unconventional materials challenge at all. It was a brilliant idea that he executed flawlessly, even if the bottom half of the look was one of the biggest disasters in the show’s history. Her shorts basically fell apart on the runway and exposed the model’s ladyparts to the judges – merry Christmas, Kylie Minogue! I won’t try and defend the mess happening below her waist, but that top is one of the most interesting things I’ve seen on this show.

For some inexplicable reason, the prize for this challenge was a watch. I wouldn’t have bothered noting it at all, except that Laura Kathleen managed to continue to make me despise her with how she categorized the prize. She felt she’d win it because, as she said, “This isn’t about who needs it, it’s about who deserves it.” Please, Laura, don’t let a single episode of the season go by where you don’t mention the fact that you’re wealthier than everyone else. It’s just so terribly endearing to hear you explain how unlike the plebeians around you, you don’t need an expensive watch. Really, it’s practically heartwarming to see how disturbingly obsessed you are with your own wealth and how convinced you are that it’s something to lord over other people. And as far as deserving the prize? Not even close. My first reaction was the same as Isaac’s – Laura made her model look twice her normal size. The dress didn’t even come close to fitting her body – it seemed to sort of hang precariously a few inches away from her skin. It was too heavy and too bulky – but I do love a dress with pockets.

Beautiful and interesting, and I laughed when I realized it was basically a much nicer version of the dress Anthony Ryan designed. The sheer panels on the side helped lessen the heaviness of the dress, though they weren’t perfectly executed. But her blending of gold and silver and texture was expertly done and resulted in a Marchesa-esque cocktail dress, which I felt was more than deserving of the win.