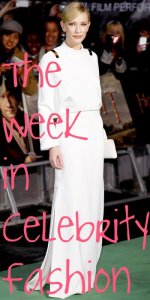 There’s a lot of red carpet to cover, dear readers.

CATE BLANCHETT in London
gown and shoes by Givenchy

Another day, another refreshingly unique look from the fabulous Cate Blanchett. And though you can’t see them in this angle, know that the shoes she’s wearing are equally incredible, if not more so:

I’ve been judging bitches for my entire life, and I’ve been doing so on this blog for just over three years (my bloggerversary was just a few weeks ago). But I’ve never seen a shoe like this before. Kudos, Cate, for continuously bringing the much-needed intrigue and taking risks on the red carpet.

Love. This is a dress that can go over-the-top really quickly, but Cate smartly stuck with black accessories and clean, fresh-faced makeup. I love the way the beading on the shoes is the same texture as the embellishments on the bodice, and the black-and-white sleeves are fucking awesome. There is no such thing as a basic black dress when it comes to Cate Blanchett’s wardrobe.

Love the orange beading, the proportions of the colorblocking, and the placement of the black waistband. It’s mega-flattering and elongates Leslie’s figure like crazy. It’s got some surprising elements without looking too weird, and though I’m not sure I’ll ever support that mesh pointy shoe, the styling was generally beautiful and interesting.

Lucy Liu owns a cape-coat with pockets and flower buttons, and I’ve never been more jealous of anything in the whole world. And if you think the accessories are a bit much, check her out once she’s lost the outerwear:

She was hiding a perfect little white dress underneath! Seriously, the different lines and angles and detailing on this dress are fantastic, and though I’d never personally choose an over-the-knee boot for pretty much anything, they look pretty epic on Ms. Liu.

The stars sure are getting use out of Raf Simons’s Dior coat-dresses, aren’t they? Leelee Sobieski, Marion Cotillard, and Jennifer Lawrence have all been seen in similar looks, and this navy, flare-skirted version is all kinds of adorable on Kirsten. Love the sheer stockings and the crazy delicious Dior shoes!

She’s going to be one of those obscenely lucky women who never gains a pound anywhere except her uterus, isn’t she? She’s going to be all skinny ankles and slender limbs as always, just with the pregnant belly. Some girls really do have it all.

While you anxiously await the return of Downton Abbey in the US (or anxiously await the opportunity to re-watch the season you already streamed illegally online), let’s visit our favorite housemaid Anna, who’s looking delicious in her Barbie pink mod dress. The stick-straight hair is a tad too severe, and I don’t love the shoes, but she’s looking better than her more famous co-stars, and that’s what really matters.

Cute dress (great color, love the pockets), but darling, do take care of those roots, won’t you?

I love a good textured LBD as much as the next gal, but Michelle Dockery has so much red carpet potential, because she’s almost too beautiful to be real, and she’s got an elegance that you almost never find in stars of this century. And though she’s worn some cute dresses lately, she tends to never get the styling right. No jewelry and boring round-toed pumps? Lady Mary would surely not approve.

I cannot get over how consistently terrible Jessica’s hair and makeup have looked for her last few red carpet appearances. Her rainbow of white-blonde to dark-brown streaks is a bad look for anyone, and her super-shiny painted-on makeup isn’t much better. The color of the dress is awesome, but I can’t pretend that a plain peplum dress that doesn’t even fit perfectly is some kind of red carpet masterpiece. And the taupe shoes don’t have anything to do with the strawberry-pink dress.

Apparently, it is possible to wear a faux crop-top and look like a little old grandmother at the same time. I mean, is she seriously wearing a brooch? What is she, a Disney villain?

I have never understood why or how anyone poses in a coat draped over their shoulders like this. It’s a lovely coat, but either put your fucking arms in it or make David hold it while you get your picture taken. And Posh, what the hell is happening to the crotch of your pants? Did David borrow your slacks and stretch them out with his giant dong? Well, I suppose there are worse problems in the world.

I don’t know who decided blue shiny shoes go with everything, but they were wrong, and should be fired from whatever positions of authority they currently hold. Also, after too many consecutive years of seeing jumpsuits on the red carpet, you’re going to have to try a little harder than this for me to be even remotely impressed.

The neckline of the dress is gorgeous, but things go downhill from there. The sheer overlay makes her look like she’s surrounded by squiggly lines, and the ivory fabric underneath isn’t laying nicely. The earrings are cute, but the shoes are boring and the color washes her out a bit.

There are dresses that are a touch too long, and there are dresses so stupidly long that they make the woman wearing them look approximately four feet tall. At five-foot-fucking-NINE, there is no reason for Alicia to ever look this stumpy. Whoever chose this dress for her was out of their goddamn mind.

In case you were wondering whether Blake Lively ever stopped wearing micro-miniskirts with hideous ankle booties . . . isn’t it comforting to know that some things never change?

Oh, good lord. She looks like an elderly woman midway through trying to disguise herself as a Las Vegas cocktail waitress.

Why any woman alive would want her tits uncomfortably squished between two velvet panels is beyond me. This is one of the least flattering and downright ugliest dresses I’ve seen in quite some time, but at least this monstrosity wasn’t inflicted on someone with actual style.

Hey, who punched Kristen Stewart in both eyes? I hope it was her stylist, after Kristen flat-out refused to remove this hideous piece of garbage before making a public appearance. Seriously, dear readers, attempt red eyeshadow at your own risk only. Best case scenario, you look like you’re suffering from conjunctivitis, worst, you look like Kristen Stewart does here. But her adventures in unfortunate sheer dresses did not end here:

What a shame, because the makeup is actually stunning – by far the most beautiful it’s ever been – and her shoes are all kinds of fan-fucking-tastic, and totally out of her wheelhouse. (By that I mean, they’re FUN!) But though the bra underneath doesn’t bother me, the ginormous high-waisted granny shorts are just awful. They’re too tight, too short, too high, too wrinkled, and all-around unflattering. Add Erdem to the long list of designers who should sue Kristen for how terrible she’s made their designs look.

8 responses to The Week in Celebrity Fashion, Part 1