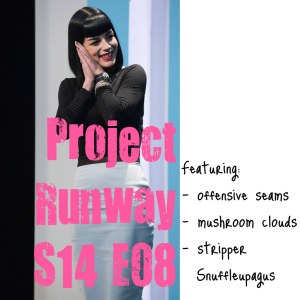 If Coco Rocha releases a book of photos of herself that has no words, is she really an author? And more philosophical questions brought to you by Project Runway.

The Challenge: The designers went to see the Broadway musical Finding Neverland and created pretty much whatever they wanted from that inspiration. It was an insanely broad challenge that would allow the judges maximum manipulation powers to make up criteria as they went along (as if that’s different from their usual routine). They didn’t have to use photos or point to a particular inspiration, so you could just make whatever you wanted it and find a link to Peter Pan and call it a day. But it was fun to see Kelly describe her first Broadway experience as “like the movies, but in 3D.” God bless.

Guest Judge: Coco Rocha, who they kept billing as “model and author.” That’s a bit rich, since the only book by her I can find is just photos of her posing. It may well be brilliant, because she’s a truly fantastic supermodel, but… “author”? Call her an artist! Call her queen of the fashion universe! But maybe your book should have to have actual words in it before you qualify as an “author.”

I feel like this same piece of ombre fabric gets purchased at Mood by a PR designer every other season. My brain might be lying to me, but it just felt very Project Runway to me. Also, this was a construction nightmare. Ashley bit off way more skirt than she could sew, and the result was sloppy, ill-fitting, and droopy.

Spooky and romantic, with a little bit of a Christian Siriano finale collection vibe to it, in that “stepped out of an 18th century painting” kind of way. Candice’s ideas were strong, as was her construction, and the styling raised it to a runway level. She clearly deserved the win.

The top was sexy, and the pants were well-fit. I didn’t hate the purple mushroom cloud jacket – I thought the relatively simple clothes underneath needed something a little fantastical. He just barely slid into my top three above Merline and Kelly, but mostly because this felt like a complete vision, from topknot to toes.

Kelly made a truly brilliant fabric choice, but I’m not sure she did enough beyond that to qualify her for the top three. This is by far my favorite textile on the runway – maybe my favorite this season – but I can’t help but dislike the minidress underneath. Partly because I think the trend of minidresses under sheer gowns has been done to death (actually, I hated that trend when it was new, too), and partly because the seam down the center of this one offended me to my core. I think she got a lot of points for the fabric, and bonus points for the gloves, but the rest of the look didn’t satisfy me.

It is complete and utter bullshit that Laurie is still in this competition. She hasn’t made anything worthy of my top three (except a look that was partly designed by Swapnil), and she’s offered some truly terrible garments in the past few episodes. The weirdly square pasties over the model’s nipples were in full view, her ass cheeks were hanging out, and from the back, she looks like a stripper Snuffleupagus. What a joke, to keep someone in the competition after an entry like this.

Yes, this has its construction and fit issues. I’m not saying Lindsey is the next Coco Chanel, but in terms of design skills, she has her shit together way more than Laurie. This was definitely not doing the model’s body any favors, but it was also not nearly the disaster the judges made it out to be. Lindsey had known for a long time that the judges just didn’t “get” her. I hope she knows that in the long run, that’s probably a good thing. After all, most of her prospective clients probably can’t afford the millions of dollars of drugs the judges need to be on in order to reach their insane, arbitrary decisions.

I HATE that the shoulders are uneven – it’s actually making me unable to focus on the things I do like – and I think the place she chose to start the fabric in back is very awkward. I don’t even really understand how the underlay is staying on her body. But this was actually a lovely, interesting concept. Merline’s head is so far in the clouds that she can never really bring any of her ideas to life in a neatly-executed way, but she’s definitely got a creative mind. She’s absolutely being kept on the show for her annoying antics, and not her mind, because that’s how this program works, but at least there’s someone with ideas in this cast.

Sculptural and soft, identifiably Swapnil, and maybe even a little bit unique. I’d like to burn the exposed zipper in a fire, but it’s still a shame this was omitted from the top three. I guess we’re still punishing Swapnil for last week’s obnoxious behavior? Or the judges are slowly pushing him down to the bottom so they can redeem him again in a couple of episodes. Like we’ve never seen that reality TV plotline before.