This week’s challenge was to create a resort look. The catch? After the contestants designed their looks and went fabric shopping, they then had to partner up and construct their partner’s design. But the judging was conducted based on who designed the look, not who constructed it. Drama ensued: Ivy is neurotic, Michael D can’t sew, Valerie needs some love from the judges (or a Xanax), Casanova can’t speak English but has good vision, etc. But who gives a shit about anything except the clothes? Let’s start the show. 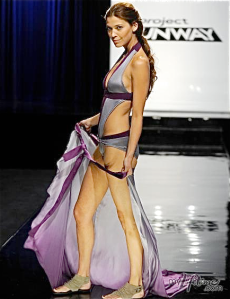 These pictures don’t quite show the unique and intriguing silhouette of this sexy swimsuit, but this was mega-hot. It’s so rare to see a truly interesting swimsuit, and Andy gave us just that. Perfectly constructed and brilliantly designed, I had shockingly few complaints. First was the color of the cover-up, which came across much uglier on television than in these photos. Second was how long it took the model to untie that knot and reveal the swimsuit – designers, models should not spend the entire walk down the runway trying to undo a bow. Drama = fully clothed, then one pull of a string, then voila! Sex. The judges gave this some love, but it was my pick for the winner.

The top half of this is fierce, fabulous, and totally deserving of the win it received. I’m all about those funky straps, and I even like the zipper in back, though I will throw up if I see one more zipper on this runway. And though some bloggers and critics think the sheer material is too lingerie for resort wear, I think it’s just sexy and fabulous.

Ugly pants and a matronly top. Isn’t this what Casanova designed in every episode? It was not nearly as bad as Ivy’s design, but I understand why the judges eliminated dear Casanova for this – it’s like he hasn’t listened to a word the judges have said to him throughout this competition. But I didn’t think the biggest problem was how matronly it was – I thought the problem was that this is the furthest thing from resort wear that I could imagine. Nothing about those ugly office pants is resort, and that shirt could not look less relaxed – it’s physically restraining her arms from moving. Resort wear is about relaxing vacation wear, whether it’s swimsuits or evening wear, but whatever Casanova designed here, it was not resort.

The shorts looked like a funny length on TV, but I’m liking them better now. And I’d wear that shirt tomorrow. I’d have considered putting this in the top 3. 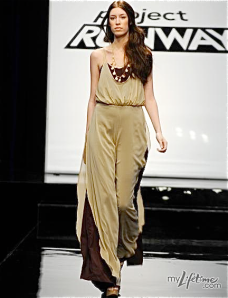 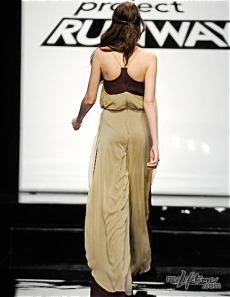 This is one of the ugliest garments I’ve ever seen. The model looks absolutely gigantic, from the sagging bustline to the giant tummy to whatever that ungodly bubble is protruding from her back, to that butt, which is so sadly hidden beneath miles of crap. I’d have put this in the bottom instead of Mondo’s look. At least Mondo’s was fun – this is just sad.

I’ve seen designers get eliminated in week one for pulling out trash like this. How is it possible that Ivy has not been eliminated yet? Seriously, look through her work on this show, and you’ll realize that a) she’s terrified of color, b) her construction skills are weak at best and c) NOTHING she makes is fashionable. NOTHING. Everything is shapeless or styleless or colorless or all three, like this sad, sad garment. I know Michael D can’t sew, but that’s not the biggest problem here – Ivy didn’t design anything. She may as well have pulled out a few yards of fabric, wrapped it around her model, stapled it together, and sent her out on the runway. This is unacceptable.

Trashy. The boobs don’t fit, the belt is fugly, the print is tacky and WHAT IS WITH ALL THE GIANT PANTS. Who is telling all the designers this season to just construct giant fugly pants and zippers? I’ve had enough. Even though this would probably be worn by a Jersey Shore cast member in Miami, at least it’s identifiably resort wear. So it gets a pass. 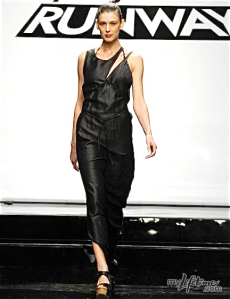 Can someone remind me again why this was in the top? Because I hate basically everything about this. It’s like the mother to April’s outfit. It’s so heavy, it feels overworked, and it’s almost as far from resort wear as Casanova’s design. The fit is atrocious and the material looks cheap.

When this first hit the runway, I really enjoyed it. Because in a sea of blacks and neutral colors, somebody had the balls to throw some color and joy into resort wear. Is this too junior for any real woman to wear? Yes. But at least Mondo had fun with this challenge and took a risk, showing multiple pieces in multiple patterns and colors. No matter how tacky it is, that will always get my respect over something like Ivy or Michael D’s designs. 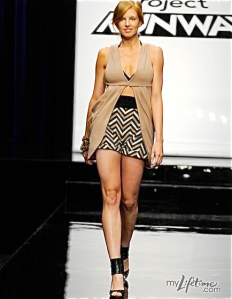 This was cute but forgettable, and deserved its spot in the middle of the pack. Again, those shorts are a bit on the ginormous side, so they’re not very flattering (it just looks like arrows pointing to her hoo-ha) but I love the cover-up dress/jacket. Even though it’s basically falling apart at the seams, I think it’s still pretty gorgeous from the back.

Check back later today for your weekly recap of all things celebrity fashion. And of course I’ll be keeping up with all the New York Fashion Week shows and working on some epic posts for you! Follow me on twitter @democracydiva for updates.