This week’s episode of Project Runway was about as awful as last week’s was wonderful. A snoozefest of a challenge – reappropriating ugly-ass bridesmaids gowns for normal women. It led to the predictable drama of contestants being dumbfounded at the sight of a woman over 115 pounds and everyone cringing over the tacky-ass fabrics they had to use. Snore. And once again, the judges managed to piss off the entire blogosphere by giving another undeserving win. Let’s start the show. 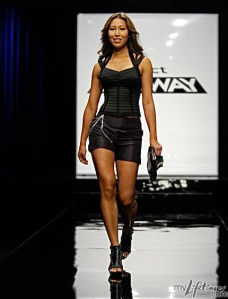 Design: I’m not saying it’s ugly or poorly made, because it’s not. But honestly, who besides a sex worker would actually wear this? I think the straps are gorgeous and the whole look is flashy and fierce, but there’s something so streetwalker about those chains and the skintight black seemingly-leather shorts. Also, really? ANOTHER butt zipper?

Styling: If Andy can tone down his stripper-chic style into something a little bit more accessible, he’ll really have something. Until then, I still like his new mohawk. 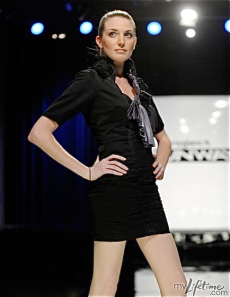 Design: Another funky and youthful design that has April’s name written all over it. I’m a little bit concerned about how she really only designs things that she’d wear, but girl knows how to rock some blouse embellishments, and I like that. On TV, all the intricacies of the blouse really pop, and from the front, the dress is rouched nicely and fits her well. Loving the sleeve length, too.

Execution: From the back, this is clearly a bit too short, and the zipper points like a crooked arrow to her no-no zone. It looks much rougher in general from the back than from the front, which is problematic. But it’s a fine job overall.

Styling: LOVING the dramatic high pony and classic heels. They really make this girl look like a model. 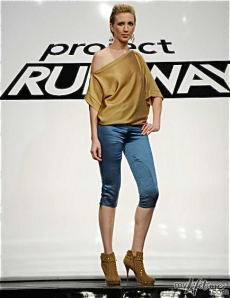 Design: I feel like socialites must have worn this to St. Tropez in 1984, and I don’t mean that as a compliment. The top is nice enough from the front, but the back just looks like a mistake. And blue satin skintight pedal-pushers? Are we serious?

Execution: Satin is an unforgiving fabric that shows every pucker and every mistake. Lucky Casanova got a “real girl” who looks like a model, or the judges might have noticed.

Styling: The hair looks stupid from the front, and those shoes should be a criminally punishable offense.

Design: This my choice for runner-up, as it’s one of the only garments on the runway that’s actually wearable. I mean, it doesn’t hurt for your “real woman” to drop out and Lifetime magically pulls out this glamazon for you to use, but Christopher did a hell of a job. I’d wear this dress tomorrow.

Execution: From the back, it looks shorter on one side than the other, or perhaps the hem isn’t straight, but it’s a minor offense. Very skilled handiwork overall.

Styling: Less is more. Simple shoes, a funky bracelet, and sex hair is all you need.

Design: I think the top and bottom are both great garments, but you’d have to be nuts to wear them together. The hand-painted shirt is exquisite; if it were a little longer in the front, I think any woman could rock that with a pair of skinny jeans. And the skirt is a dream. But it was a mistake to pair them with each other.

Execution: Everything looks just slightly unfinished – not sure if that’s intentional or not.

Styling: Gretchen needs to tear herself away from those tacky boots – she’s used them before, and they only make things uglier. 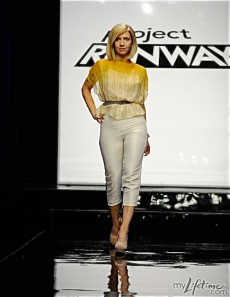 Design: Sorry, I just fell asleep looking at this picture. This is just so blah. Very housewife/country club. But shiny.

Execution: The top looks nice, but it’s all draping and no sewing. And once again, Ivy has proven that she can make a really ugly pair of pants.

Styling: The hair is Hillary Clinton meets Nancy Pelosi. Would you want to see that on a runway? 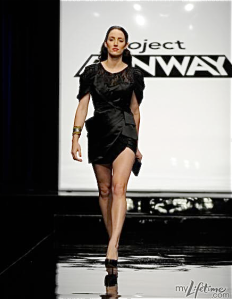 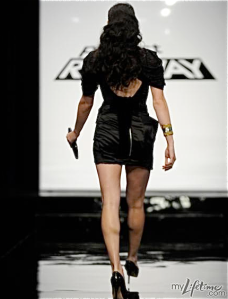 Design: Where do I begin? The length and cut of the sleeve is ugly. The pieces on the skirt look like they were added at the last minute and make the whole dress look sloppy. And I think it looks like a morbid 80s prom dress. AND THERE’S ANOTHER BUTT ZIPPER.

Execution: It’s about a mile too short, and nothing about this looks well-made.

Styling: That hair and makeup belongs in a burlesque show in rural Alabama.

Design: One day, there will be a designer on this show who can look at a larger woman and craft something beautiful instead of something insane. I’m holding out hope. I can’t say it any better than Michael did: She went from bridesmaid to bat mitzvah.

Execution: Where the lace meets the pink in the back of the dress – it’s a disaster area. And that black netting looks about as cheap as can be.

Styling: What the FUCK is that hair? (Cute shoes, though.)

Design: An absolute winner in my heart, Mondo took a tacky disaster and turned it into this mod wonder. I would live in this dress. Unbelievably cute, great use of color-blocking, and totally body-conscious and flattering.

Styling: I know everyone hated this Jersey Shore styling, but I stand by Mondo’s decision. I think that weird little man was inspired by this girl’s Jersey City roots (and her orange fake tan) and decided to run with it, Snookie-style. I love that she looks like she’s straight off the Seaside boardwalk.

Design: Every mistake you can make was made here. The top is a disaster, and the green ruffles are absurd.

Styling: Combat boots and stick-straight hair? I love the 90s just as much as the next girl, but come on. 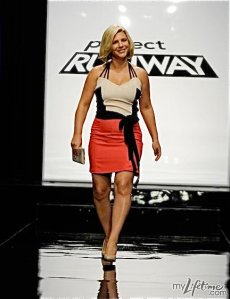 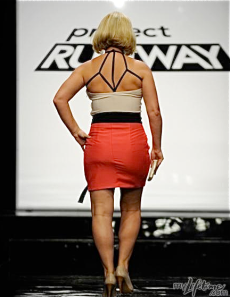 Design: I love Valerie, but I judge her for not knowing how to design for a normal-sized woman. Because on a 5’10” size zero, this dress would have looked fucking awesome. But all the color-blocking just serves to point to different body parts in the least flattering of ways. And the back is flat-out tacky.

Execution: It’s just too tight, especially the straps in the back which look like they’re straining to rein her in. This woman should sue for defamation – her body is way better than this dress makes it seem.

Styling: The hair looks like a cheap wig, the purse doesn’t match, and black shoes would have been better.

—
Check back for more fashion and fabulous later this week! And don’t forget to follow your favorite diva on twitter @democracydiva!