Last night’s episode of Project Runway featured a never-before-seen challenge – design a look to be worn with one of Philip Treacy’s famous hats! (Philip Treacy is an absolutely genius artist who makes breathtaking avant garde hats.) And even though the designers made their choices based on the model (and their refusal to design for new proportions) instead of the hats, it was still a fabulous episode. Let’s start the show! 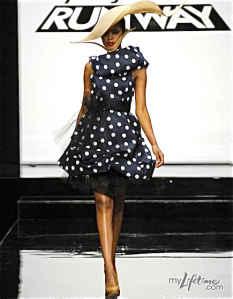 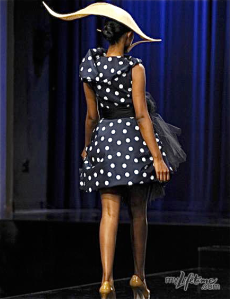 Design: I see where AJ was going with this. He wanted the shoulders and skirt of the dress to be voluminous and curvy like the hat. But the crinoline around her waist feels kind of useless, like he just put it on to hide his mistakes when Tim pointed out that the polka dots didn’t like up.

Execution: I have no proof of this, but I feel like the curves in the outfit were supposed to curve more than they actually do, to further imitate the hat. So I’m not sure whether he actually accomplished what he intended to, but it at least looks well-constructed.

Styling: The styling for most looks was minimalist, which was a good thing, because most accessories only distracted from the hats. So I’ll just say I like the shoes, and I’ll refrain from commenting on styling in this post unless there’s really something to say. 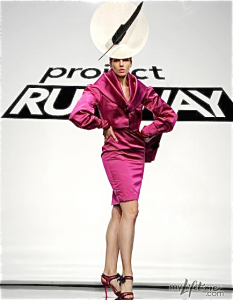 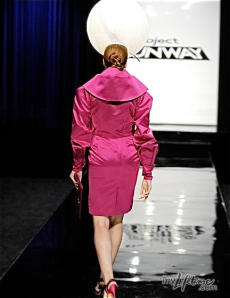 Design: Andy won last week’s challenge, giving him immunity for this week. And instead of taking that as an opportunity to take a nap, he took a risk, which I respect. This look has its flaws, but he knew he had the opportunity to do something ridiculous without risking elimination and he went for it. So, yes, this is pink and puffy and shiny, but it’s also daring and fun and dramatic. And I actually think the socialite regal enough to wear that hat would totally rock this ensemble. And the neck line is gorgeous.

Construction: He took on a lot, so of course the construction suffered. The puffy sleeves look uneven from the back, and the seams on the skirt are kind of ripply and strange.

Styling: I can’t decide if the shoes are tacky as hell or my favorite thing about the outfit. Thoughts? 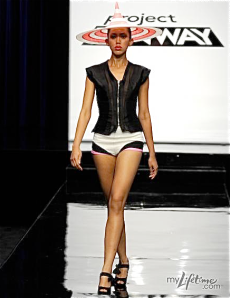 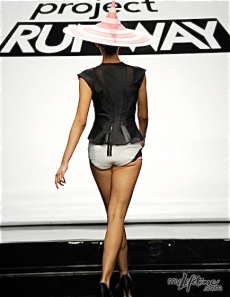 Design: You know, I want to chalk this up to April being 21 years old and use her youth as an excuse for such a disaster. But Christian Siriano was 21 years old when he was on the show, and he created couture. So, no excuses, bitches. This was an awful design, and regardless of age or experience, anybody with even the most remote understanding of women and/or clothing should know better than to design a diaper with a butt-crack zipper.

Execution: “It looks like student work” is what approximately 8 billion people have said about April, and I hate to be redundant, but… I mean, it really does. 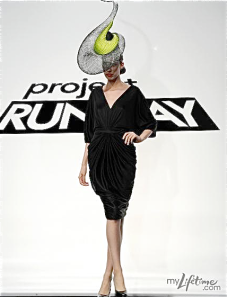 Design: Finally, something from Casanova that doesn’t completely suck! I mean, Tim was right when he called this 1988 Donna Karan, but at least it’s aesthetically pleasing. The draping in the front and back is phenomenal. I’m over the big arms look, and if I see one more rectangular low-cut back this season, I’ll lose my mind, but it was classy and sexy, and the draping curves of the dress go nicely with the shape of the hat. Nothing innovative or risky, but a solid middle-of-the-road entry. 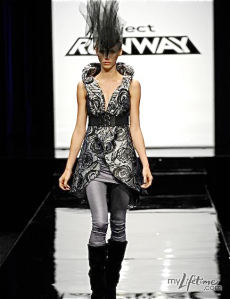 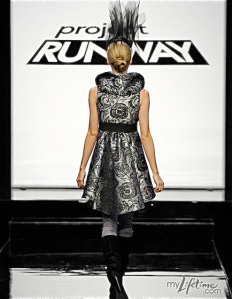 Design: Like all the designers on the show and (I expect) most of the blogosphere, I’ve got to disagree with the judges on this one. Some of the negative things they said about Christopher’s design were absolutely true, but it was as if they wanted a Marchesa knockoff with sassy layers of draped crinoline because, well, that’s exactly what the hat looks like. I don’t see why a heavy fabric can’t go with the light fabric of that hat, and I think using black crinoline would have been the easy way out.

Execution: There is something off about the way the front of this coat-dress lays. I think the judges exaggerated the execution flaws, but certainly the unnatural stiffness of the collar and center of the piece are problematic. But I think the back is flawless, especially the back of the collar.

Styling: This is really where the judges were spot-on. The grey-on-grey-on-grey coat, underlay, and leggings were a mistake. Those leggings are fugly, but even if they were fabulous, no woman in a Philip Treacy hat is wearing silvery leggings. The boots and belt were also mistakes. But if we stripped her of all the accessories (except, of course, the hat), this would have been a decent design. 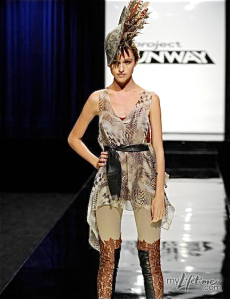 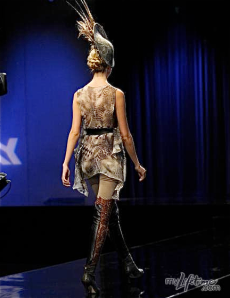 Design: When this walked down the runway, I couldn’t quite figure it out. And I’m still a bit flummoxed. But now that I’m taking the time to look at each piece individually, I’m convinced that Gretchen is resting on her laurels. The shirt is a gorgeous print, but nothing about what Gretchen did to that print is impressive. And those leather-and-lace leggings are an absolutely nightmare.

Construction: She made leggings and a flowing, shapeless shirt. There is no construction. 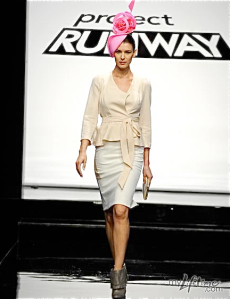 Design: To borrow a word from Heidi, this is a snoozefest. That hat is a sculptural work of art, and she made a whatever blazer and a boring pencil skirt. Nothing original, nothing architectural or sculptural, nothing that evokes the brilliant essence of Treacy’s hat. Also, who pairs white with ivory?

Execution: Nothing great, nothing terrible. ::snores:: 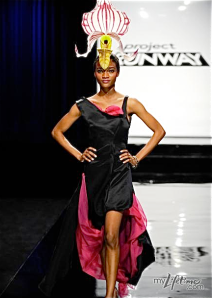 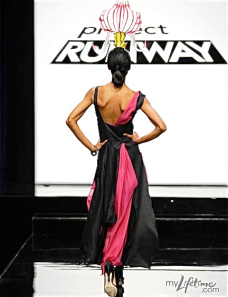 Design: Well, I’ve been saying for weeks that Kristin’s lack of taste and unfinished garments would catch up with her in the end, and it finally has. Could someone please tell me what about this dress has anything to do with the orchid hat? Is there anything romantic, springy, or sensual about this dress?

Execution: Even worse than the design. Nothing looks planned or intentional; everything looks sloppy, unfinished, and under-designed. Every single hem is frayed, every line is crooked, and nothing about this draping is remotely fashionable or flattering. Kristin lacks both a basic understanding of what looks good on a woman’s body AND the technical skills to create even the most basic of garments. 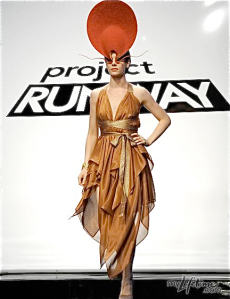 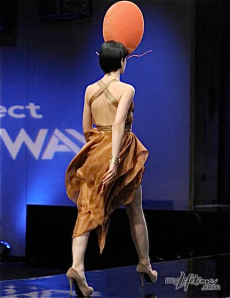 Design: This was a decent entry, but nowhere near deserving of the loads of praise the judges gave it. The color is, without a doubt, absolutely perfect. It captures the iridescence and color scheme of the hat without being too matchy-matchy. And the front of the dress is certainly layered and draped in an aesthetically pleasing way. It certainly has a goddessy feel to it, but that’s more because of the fabric than Michael’s design skills. And in their desire to over-praise, the judges overlooked some very obvious technical flaws. They also completely ignored the fact that this dress is a) nothing we haven’t seen before and b) not particularly difficult to create.

Execution: The bust is a MESS! I’m ashamed of Heidi, who can usually be counted on to point out booby mistakes, for letting this slide. But the strips of fabric that lace around her chest leave some fabric bunching awkwardly between the strips. And since there’s no place for the boobs to actually go, they sort of hang lopsidedly beneath the fabric – and what woman wants that? The two “cups” are completely different shapes, the straps start at different places, and even this flat-chested biddy looks a hot mess from the torso up. 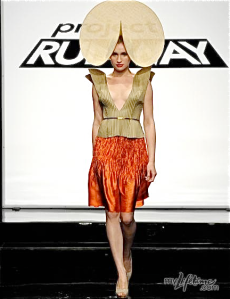 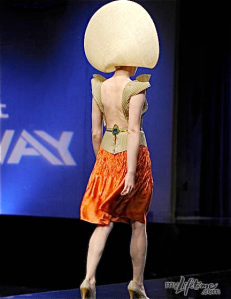 Design: Brilliant. Someone finally stepped completely outside the box while showing true inspiration from Treacy’s work. This is original and innovative, and evokes the architecture and whimsical feel of the hat. It’s highly conceptual but still trendy (hello, Lady Gaga shoulders) and wearable (any woman would look great in that skirt). And it’s super-revealing without being vulgar, which we all know is a tough tightrope to walk. But I’m not loving the belt in the back; I find it distracting.

Execution: Flawless. And he was doing serious architectural work with difficult fabrics. (Take that, Other Michael!) 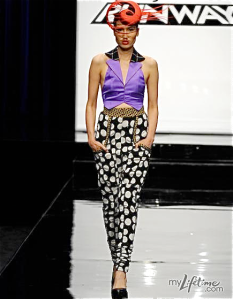 Design: Sure, it’s whackadoodle. But so is Philip Treacy. And at least it’s whackadoodle with style, flair, and purpose. I just wish it had anything to do with the hat. I’m sure on Mondo Planet, the connection is clear, but to me the only connection is that they’re both bright, zany, and wild. And the man sure knows how to mix prints. They may not be wearable, but they look damn cool.

Execution: Every season, Project Runway has one contestant who is far nuttier than the rest. Someone who takes themselves far too seriously, someone who is highly conceptual, someone who refuses to play by the rules or color inside the lines. And on every season, that person tends to lack basic technical skills, taste, and the minimum amount of sanity needed to actually accept critiques from the judges. This is where Mondo differs from his crazy-ass peers. He’s the nutty artist for sure (“sometimes this gift I have feels more like a curse…” okay, chillax, Mondo) but he’s got top-notch technical skills, funky-artsy taste, and enough of a head on his shoulders to know when to chill the fuck out and get his shit done. And that, I respect.

That being said, look closely. The model is wearing a fake pencil mustache. I think I speak for all of us when I say, WHAT THE FUCK?!?! 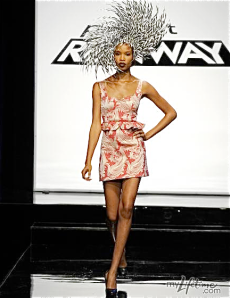 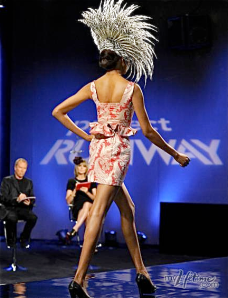 Design: Peach had by far my favorite hat of the lot and still managed to bore me half to death. What a shock – she made ANOTHER pink-and-white cocktail dress made for a little girl’s tea party. Just like she has for every fucking challenge this season. But, much like Kristen, Peach too will have this come back to bite her in the ass. This is a vast improvement over all her other girly pink dresses; however, it’s a silhouette I’ve seen basically everywhere, and I can’t find its connection to that fucking fabulous hat.

Execution: Infinitely better than her other work on the show, but not without flaws. I’m not sure the hem is straight, and I think the sash around her waist could be constructed better and more evenly. And I still don’t like the way she does neck lines. It still looks like top is curved in a crooked and strange manner. 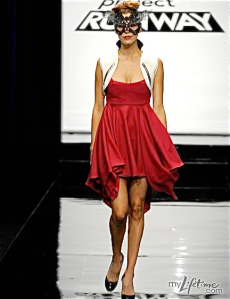 Design: Valerie once again came close-but-no-cigar to winning the challenge, but of course was overlooked in favor of a much simpler and much crappier dress. Valerie’s dress had it all going on – simplicity (the perfect red dress), innovation (the absolutely fierce cropped jacket), whimsy (the zippers, plus the one in the back that you can’t see here), and it was one of the only designs that looked worthy of being worn with a Philip Treacy hat. It’s streamlined and modern, it’s sportswear meets couture, and it’s incredibly wearable.