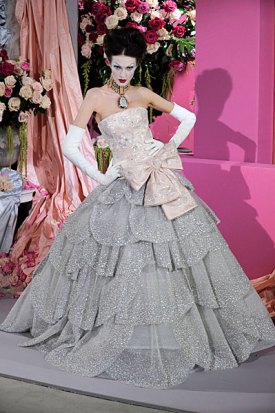 This week was an exciting one for fashion, as the haute couture collections were showed in Paris. Christian Dior’s collection had me absolutely floored. I thought every look was fascinating, and the photos from the show seem so editorial, as if they were at a photo shoot instead of on the runway, as drapery and flowers covered the background of the runway show. The above photo was my favorite, because it’s basically Princess Barbie’s wedding gown, but the dramatic styling and accessories were a unique complement to every look. Well done as usual, Miseur Dior.

One of my least favorite people, Katy Perry, wore two disturbingly ugly outfits this week, and for that, she gets this week’s Repeat Offender award.

Snooki from Jersey Shore called. She wants her tacky American Apparel dress back.

And the next time you wake up in Vegas, make sure you don’t have a drag queen Pocahontas impersonator in bed next to you. And if you do, don’t steal her dress. She’s suffered enough.

This award goes out to the person whose wardrobe looks the most like mine (if I had way more money to spend on clothes).

A blazer, a 90s-style flowered dress, tights, boots, and unkempt hair? That’s basically my uniform. I’d have dressed up more for a Sundance film premiere, but this is something I’d wear every day of my life if I could.

What I hate about Rihanna (besides the fact that she has no talent and yet is incredibly successful) is that she thinks she is far more beautiful than she actually is. She gets horrifically ugly haircuts and wears hideous makeup as if to say, Look how beautiful I am! I can wear this and still be beautiful! Except, she can’t. She looks like a lunatic, and she (like Jessica Biel and Sandra Bullock) looks so out of place in a couture gown because of how ungraceful she is. And now she thinks she can get away with something as out there as Viktor & Rolf? I’d just like to remind everyone out there who is not Lady Gaga: You are not Lady Gaga. You cannot carry these crazy outfits like the true zany artist that you are, because you are all full of shit and don’t know how to wear anything high fashion. Lady Gaga can pull off those crazy outfits not because she is the most beautiful woman alive, but because she’s legitimately batshit. If you are neither graceful and beautiful, nor a complete loon, don’t bother wearing these outfits. Thank you and good night.

8:01 pm: Gaga’s biddies take the stage. Not sure what is happening yet, but the harmonies sound good. And she’s appeared, and she looks like the perfect lunatic that she is, and she sounds beautiful. And isn’t it refreshing to have somebody not lip-syncing for once?

8:04: Elton and Gaga on a two-sided piano. All my dreams have come true. And they’re wearing matching sparkly Elton glasses. I almost cried when they sample “Your Song.” And I love that they can see each other in between the crazy arm sculptures on the piano. That was absolutely lovely.

8:07: Consensus from the roommates: “I’m really glad that happened.”

8:08: Already sick of the Colbert shtick. But I did laugh at the Glee joke. And the Jonas Brothers joke, two minutes later. Everything in between was forgettable.

8:11: First award: Song of the Year. And first iPad reference, which everybody appreciated. Nominees: Gaga for “Poker Face” (co-written by Gaga), “Pretty Wings” by Maxwell, “Single Ladies” by Beyonce (co-written by Beyonce), “Use Somebody” written and performed by Kings of Leon, “You Belong With Me” (co-written by T. Swift). Prediction: Beyonce. Winner: Beyonce! 1/1 so far.

8:13: Beyonce is too busy putting on a really tacky outfit to accept her award. But her songwriters got cut off after about ten seconds. Come on.

8:15: The cast of American Idiot takes the stage. The first girl is good by pop/rock singer standards, but not by Broadway standards. Same goes for Singers 2/3 (crazy hair/blonde hair duo).

8:16: Where is John Gallagher Jr.? He’s the only cast member that matters.

8:19: Good harmonies, but I’m still not sure I actually caught sight of my darling Johnny. I think I may have seen him in the back. NOT GOOD ENOUGH.

8:25: The stars of When in Rome? Really? This is disgustingly promotional.

8:26: Second award. Best Country Album. A bunch of people I’ve never heard of, plus Keith Urban and Taylor Swift. I’m going with Taylor FTW. And she wins! She looks beautiful, but I wish she wore her hair down. She’s a beautiful girl, but her perfect hair is her best feature. I’m 2/2, if you’re keeping track.

8:28: Did anyone know Simon Baker is British? I somehow missed that. Comment from Rox: “This guy looks drunk.” Amen. And now Beyonce enters with an army of dancers.

8:29: Not to upset all my gays out there, but I’ve never been a huge fan of Beyonce. Sure, she can riff, but I don’t particularly like her voice. And I certainly don’t believe she’s particularly beautiful. And the outfit just isn’t her. It’s Rihanna.

8:32: “You Oughta Know” begins. Except she cuts the dirty (aka awesome) parts. She doesn’t sound good; this song is too low and not at all suited for her voice.

8:33: Now she’s humping the stage in a circle, and I think her boobs are about to pop out. I also dislike the straight blonde hair. So unnatural. But Jay-Z giving her a standing O was cute.

8:41: She looks like a complete fool. And I’m not sure she’s singing. If she is, she has awful diction. You’re supposed to open your mouth to sing, darling. And she’s just not talented enough for these look-how-emo-I-am ballads. Stick to being a hazard to yourself.

8:43: I will say this only once: There is one Lady Gaga. Pink, you are not her. And you stole that pod choreography from Scout, Ben, and Children of Eden.

8:44: Is she peeing all over the audience? I hate this performance. She tries so hard to be innovative and out there, but she’s a complete hack, and her shit makes NO SENSE.

8:47: Best New Artist. There are no nominees I actually care about. I’m thinking MGMT might take this.

8:56: Fergie’s rapping voice is almost as grating on my ears as her singing voice. And this song is boring. And really terrible to listen to.

8:57: Let’s lipsync a terrible song! Even better, because this one gets stuck in your head like no other.

8:58: WHY DO THEY STILL LET HER MAKE MUSIC? SHE CANNOT SING.

9:00: Nobody is paying me millions of dollars to scream the days of the week off tempo and off pitch. And if this is the future, then just kill me right now.

9:05: What is that Jonas wearing on his face? Also, the one on stage left sounds supergay. I’ve never heard of this Lady Antebellum, but so far it’s nothing particularly interesting.

9:09: I wouldn’t go out of my way to listen to them, but it was enjoyable all the same.

9:17: Norah Jones is beyond irrelevant.

9:19: I think I’m the only person I know who hates Kings of Leon. There is nothing original about their sound, their song is boring, they’re not attractive, and I don’t like the lead singer’s voice. And my predictions are down to 2/5. I’m failing.

9:21: Did I just fall into the tonedeaf Tonys? Why on earth did this happen? And Jamie Foxx is not even pretending to sing.

9:23: George Clinton is loving this, which is hilarious. And the person I thought was Lady Gaga turned out to be T-Pain. Beyond that, this completely sucks. How can you pick a song that’s completely auto-tuned for a LIVE performance? I’m in pain.

9:26: I could not pick Ke$ha or Justin Bieber out of a lineup if you paid me a million dollars. I don’t even know what he does. Like, what he’s famous for doing. And Ke$ha is obnoxious just because of the dollar sign in her name.

9:37: Some songs should not be screamed. “America the Beautiful” is one of them.

9:39: I’m sorry, but the Grammys are not the place to have a folky, impossible-to-listen-to jam session.

9:46: Taylor Swift takes the stage. Cute guitar, and she’s so casually dressed. She doesn’t need the gimmicks, and I love it.

9:48: Stevie Nicks!! Fabulous surprise. Their voices complement each other beautifully.

9:50: This deconstructed, banjo version of “You Belong With Me” is absolutely phenomenal. I love when Taylor does her softer voice; her tone and expression are so beautiful.

9:57: I have a lot of problems with this so far: #1: If you don’t have 3D glasses on, this all just looks fuzzy. #2: They should have had everyone start onstage so that the song isn’t interrupted by applause six times. #3: Michael should rest in peace and everything, but he was still a pedophile. He lived a difficult life and I don’t blame him for his mental problems that led to those actions, but it’s just so creepy to have a little girl walking around by herself in a garden in the MJ tribute video. I think that’s problematic. #4: Nobody sounds particularly good except for Michael. #5: Jennifer Hudson’s bangs look beyond stupid.

10:00: That was not particularly emotional. And I’m one who is quick to cry, but I didn’t get the least bit weepy.

10:08: I like Sheryl Crow, but I’m not sure she’s deserving of nine Grammys. That seems excessive. But Bon Jovi takes the stage, and this Jersey Girl is locking it up to listen to them.

10:24: I’m really bored. But God bless Wyclef Jean for his words about Haiti. That was the most interesting thing to happen in about 45 minutes.

10:28: As Jill just said, Andrea Bocelli’s performance was one of the best things to happen all night. And I always forget how much I like Mary J. Blige.

10:33: I just noticed that, accoring to the upcoming performance times, the Grammys are not ending at 11pm, as I had hoped. Just so y’all are aware, I’m not watching a minute past 11:00, because I am already bored and I’ve got work to do. So the liveblog will end before the end of the awards show, but I think you all will survive.

10:36: In the midst of a lot of boringness, now the President of Something Musical gets to give a nine hour speech about something no one cares about. Can’t the cast of Glee come onstage and perform?

10:40: Dude, nobody in that room is struggling to feed their families because of people who are illegally downloading music. Don’t even bother.

10:43: I enjoy listening to one Dave Matthews song in one sitting, but all their music sounds so much the same that I can’t take more than five minutes of them. But they do put on a nice-sounding live show.

10:46: They finally announced Lea Michele as being from Glee and Spring Awakening! It’s about time. I’m not sure why the hell she’s paired with Ricky Martin. Best female vocals: I think it’s Taylor.

10:48: I have to stop trying to outsmart the awards. Beyonce won for Halo, which is a pretty good song. But she’s wearing the 3rd awful outfit of the night. Now I’m 3/8. Yes, it’s taken them three hours to present eight awards.

10:59: Whose idea was it to put elevator music live on the Grammys stage?

11:01: Ah, the Memoriam montage. I forgot about DJ AM’s death. This is always just a reminder of how quickly we forget.

11:03: Who got stuck sitting behind Gaga’s giant headpiece? They certainly aren’t getting their money’s worth.

11:04: I’m officially too bored to keep blogging. Sorry to end on such a lame note, but at least my red carpet recap will be up sometime tomorrow! Until then, go find something less boring than the Grammys to watch.