Let’s get down to pretty pretty princess business.

A truly stunning gown by Alexander McQueen’s Sarah Burton, much more reminiscent of Princess Grace than Princess Diana. A surprise because the Diana comparisons were everywhere, but from a style perspective, Kate’s aesthetic is more Grace than Di. Obligatory shots of those notoriously beautiful princess brides: 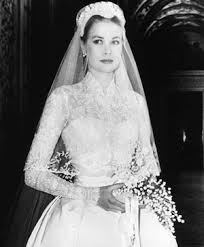 So many uncanny similarities – a sweet, strapless bodice underneath long-sleeved lace; a cinched waist, with fabric billowing out below; the long, sheer veil with its lace trim. Kate was wise to keep the neckline lower, more in line with her modern princess style.

But Kate went about as far away as possible from her new husband’s late mother’s style:

Okay, let’s get down to Kate’s details.

I’m glad she resisted the urge to copy Princess Di’s 25-foot train. Modern royalty is about emphasizing a classic, simple look – the more ostentatious looks of the past are not Kate Middleton’s style. Plus, I hate long trains. Do you know how many times I’d have to pee that day, what with being nervous and drinking champagne and just maybe wanting to go chillax in the ladies’ room to hide out from the paparazzi? How do you do that with a 25-foot train? [Though Kate’s 8½-foot train still seems problematic in this regard. But I guess that’s what the maid of honor is for. Sorry, Pippa!]

The Bride and Groom

I love how you can see them both smiling while kissing. The tiara/veil is stunning.

Maid of Honor Pippa Middleton in Alexander McQueen, with bridesmaids Grace and Eliza, both in Nicki Macfarlane

Oof. Pippa, that tan is borderline Jersey Shore. I know it’s hard for pale girls to wear white, but you’re British, darling. Nobody believes you are actually that tan.

In spite of the Snooki tan, I must say that Pippa looks absolutely incredible. There’s something sexy about it, even though it doesn’t reveal much (though I’m sure the Queen Mum thought it was too low-cut). She, like the bride, wore a creation by Sarah Burton of Alexander McQueen, modified from this Pre-Fall 2009 gown:

Now, what about the honored guests?

This fabulous old broad can still rock a fabulous hat.

If I were the Duchess of Cornwall, I’d wear that coat.

Princess Eugenie of York and Princess Beatrice of York, both in hats by Phillip Treacy

These ladies are so awesome. Eugenie’s dress is ridiculous, and her hat was clearly stolen from Yankee Doodle and Peter Pan’s gay son, but it’s the royal wedding. Crazy hats and pastels are basically uniform. From the neck down, Beatrice looks flawless in that pink-nude, but for a second I thought she was wearing Lady Gaga’s lobster hat. Which isn’t too far from the truth.

Sophie Winkleman in an Armani suit and Phillip Treacy hat

I don’t know who she is [Wikipedia tells me she’s a British actress], but this is what everyone should wear to a royal wedding.

Prince Harry’s on-again, off-again girlfriend looks a hot mess. Those hems and seams looks stapled together – I can even see a loose thread hanging – and I think it’s downright offensive to look this disheveled when your date is the best man – and, you know, a PRINCE. And the hair? Who told her that a MESSY BUN is appropriate for this event? Harry is WAY too good for these shenanigans.

Beckham looks flawless. I judge Posh for wearing a ponytail to the wedding of the Prince of her country, but otherwise, they look pretty fucking flawless. Those shoes are outstanding.

It was lovely spending the wedding with you, dear readers. Time to go back to my studies!

One response to The Fashion of the Royal Wedding