New York Magazine’s The Cut blog calls the Met Gala “the Oscars of the East Coast.”

The theme was McQueen tonight at the Metropolitan Museum of Art’s Costume Institute Gala – the Institute’s exhibit of the late British designer’s work opens on May 4th, just in time for Kate Middleton to wow us all with her wedding gown by Sarah Burton, creative director of Alexander McQueen. Let’s dive in and see who looked mind-blowing, who looked mind-blowingly dull and who just looked out of their damn mind.

I have a feeling this dress would be beautiful without the jacket and belt, which make it way too casual for the couture-fest that is the Met Gala. But it’s not every day that women elect to wear chocolate brown on the red carpet, so kudos to Ms. Keys.

I think this dress is stunning and she’s never worn a more flattering dress. I love the color, and though the print is a bit grandma’s-couch for me, she’s absolutely nailing it. If I could just rip that braid off her head, she’d be perfect!

From the neck down, this is one of the best red carpet looks I’ve ever seen from Amy Poehler. But the hair and makeup are offensively bad. She looks clownish.

She’s the editor-in-chief of Vogue, so Anna Wintour gets to do whatever the fuck she wants. But I can’t help but think that if I had access to all the greatest designers in the world, I’d wear something a hell of a lot more beautiful than this.

I read rave reviews for this look, but I’m not drooling. Of course she looks beautiful and flawless, but Ciara’s wearing almost the same thing, and the Met Gala is the time to take risks, not play it safe.

Haters will hate, but this is fucking FIERCE and exactly what the Met Gala is all about: drama. Any event hosted by the Metropolitan Museum of Art’s Costume Institute is deserving of more than just your ordinary sparkly Hollywood ball gowns. The Met Gala deserves giant sleeves, and this bitch brought it. Love the hair, makeup, and shoes, too.

This photo alone explains why I hate Beyonce. Mermaid silhouette, fabrics that look like apholstery, three sizes too small, completely unflattering, and just kinda fugly. And she didn’t even bother to do her hair!

You can judge her for wearing half a toga and half Britney Spears’s nude glittersuit in the “Toxic” video, but she looks like a fucking VEELA. She’s other-worldly beautiful here.

Too simple, and a bit of an eyesore, at that. Also, Brooklyn Decker is a babe, but that haircut is just so mom. I don’t know what her stylist was thinking.

I’m glad she didn’t go for the super-micro-mini dresses from this collection that every celebrity has been rocking lately. (See: Diane Kruger, Kate Bosworth) It’s a length that only works on a supermodel, but she’s glowing, and managing to make a below-the-knee white lace dress not look bridal.

This bitch is on CRACK. Every time I think her hair can’t get stupider, it does.

There is no excuse for being as beautiful as Joan but running around dressed and styled like this. How has she not realized that her stylists are all either completely fucking insane, or too busy rolling in their money to tell her she looks like shit?

Wednesday Adams goes to the Met Gala. Yeah, it’s a bit creepy, spiderwoman-esque, skeletal, but I’m all about this level of drama, and you can’t deny that Ricci is wearing the hell out of this.

See: Every dress Claire Danes has ever worn.

Bringing it the way only a supermodel can. Crystal Renn has walked in the runway shows for Chanel, Jean Paul Gaultier – she’s a goddess.

If the royal wedding means that we have to endure celebrities wearing fascinators on the red carpet, I may lose my mind. Demi, we’re not British. No matter how much we wish we were, we cannot rock a fascinator. And yes, that dress is absurdy feathery, but this is the first time she hasn’t looked boring in like, five years. So she gets props for that.

STUH. NING. If the slit weren’t quite so vagina-adjacent, I’d wear this in a heartbeat.

Boring. And the slick side part with blonde hair and black roots is a look that works on no one.

Way too Emmys for the Met Gala, but it’s a pretty big improvement for Banks, who is rarely a success on the red carpet. The hair is stunning, but the makeup is a bit heavy, and the gold accessories were a mistake.

Dakota’s little sister, at only thirteen years old, is gaining some press for her fabulous fashion choices. Clearly, this is not one of them. But she’s a tween in Valentino, so who the fuck am I to judge? (But seriously, those shoes are ugly. And that blouse . . . it didn’t work on Goody Proctor, and it doesn’t work on you, Elle.

Beautiful, if a little too simple. But I blame Michael Kors – he makes some great American sportswear and simple, beautiful gowns, but I think his aesthetic is not dramatic enough for the Met Gala.

One of my favorites from the night. If you’re not going to go risky with the silhouette or color, do a fabulous floral print! The hair and pink lipstick are perfect accessories. I wish she had a necklace or bracelet, but otherwise, Emma Stone gets this Diva’s full approval.

Nice color, but this dress has nothing of interest going on besides a tacky belt and a giant sleeve. 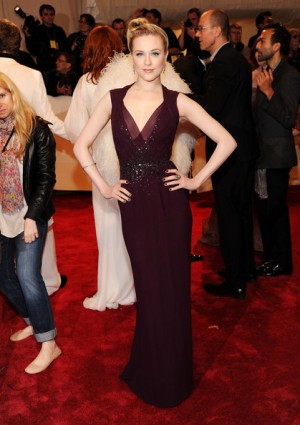 Gorgeous, but too simple for the Met Gala – especially for Evan Rachel Wood, who is known for bringing the crazy sometimes.