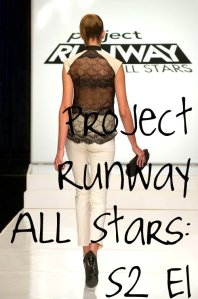 There’s no rest for the Runway weary, dear readers – Season 2 of All Stars has begun!

The Challenge: In two teams, create a mini-collection based on an “attitude,” or just any vague word that could basically describe anything. I don’t mind a team challenge, except when the producers feel it’s necessary to make only the winning team eligible for the Top 3 and only the losing team eligible for the Bottom 3. It drives me insane to have to make believe that the judges are selecting the best and worst looks on the runway when they’re not. And that’s how you end up with Emilio safe and Casanova in the top when that truly defies logic.

For someone who made it so far in her season, I remember astonishingly little about Althea. But I think she made a perfectly good look, if an “I’m aiming to be safe” sort of look. It seems a lot of designers were reticent to try anything too daring this early in the competition, particularly when there’s no immunity and still a good chance of skating through to the safe zone. I think the front of the dress is lovely, but I knew as soon as I heard the words “Nine West accessories wall” that this season’s styling was going to take a serious dive in quality. The lace detailing on the back is equal parts strange and pretty, but it wasn’t a particularly memorable look. Then again, with everyone trying to be cohesive and essentially blend in with the crowd, there weren’t too many particularly memorable looks from this runway show.

Everything about the design and construction is classic Uli – that’s not a bad thing, but she didn’t win her season because the judges feared she was a one-note, so this doesn’t bode well for her proving them wrong. The draping is, as expected from Uli, perfectly effortless and beautiful, but the frippery around the neckline is too distracting and not particularly pretty.

Just when you thought the infamous Wendy Pepper was going to shock us all with a perfectly chic (if not particularly innovative) black cocktail dress – SHE ADDED A MERKIN. How she could even think to put a patch of lace over just the crotch of the dress is unfathomable to me. If nothing else, I know I can count on Wendy to provide the laugh-out-loud moments – when I’m cackling as her looks come down the runway.

I don’t know why on earth the judges raved over this beyond ordinary and not particularly well-executed look. Maybe they’re trying to overcompensate for the fact that aside from his ridiculous personality and thick accent, he’s got basically no business being called an “All Star.” Regardless, I thought the “leather” looked more like trash bags, and the thick trim where the sleeve stops looks kind of cheap and disjointed. The back was pretty, but not so much that Casanova deserved a spot in the top three.

Truth be told, I always hated Ivy. Like most people who saw her season, I thought she was a bitch and that her design skills were vastly overrated. People raved over her technical skill, but I never thought it was as good as people claimed, and I thought she had little to no design capabilities. And though I’ll likely never stop thinking she’s a bitch, I have to eat my words about her skills, because I loved this look from the moment it hit the runway. That jacket is a perfectly modern take on a sort of vintage Chanel vibe, though I agreed with the judges that the leather shorts weren’t the best idea. I don’t think she could have made a full pant and that jacket in the given time, though, so I forgive her doing a short instead, but I wish it looked a little less like baggy biker shorts.

This look had some wonderful elements, but there’s no way it should have snagged the win. The front of that blouse looked very frumpy, and I believe Isaac pointed out that the crotch on the pants was a little wonky. The judges were obviously swayed by the back of his blouse, which is almost breathtakingly delicate and lovely. But the front of the look was too weak to award Anthony Ryan th ewin.

I’m not surprised by Kayne’s over-the-top beauty pageant aesthetic – it’s what he’s known for, after all – but the pants on this thing are what’s absolutely killing me. Long-sleeved jumpsuit in the front, backless gown in the back – holy hell, is this a lot too look at, and not at all in a good way. But in true Kayne fashion, it had a strong point of view and was incredibly well-executed given the time constraints, which surely pushed him over into the safe zone.

Peach is a darling woman, and I mean no offense to her personally. But for the producers to take an eleventh-place finalist who never showed any promise beyond a juniors athleticwear line and call her a Project Runway All Star is embarrassing and, frankly, speaks to how stupid Bunim/Murray think their viewers are. They hauled her out to fill up space and kick her out early, as if to kill time. All of that leaves me too exhausted for much commentary on the look itself, which would look terribly sewn on an ordinary PR episode, let alone for All Stars.

The judges raved that Laura would have been eligible for the win had she not been on the losing team, but this wasn’t my winning look from Team Bold. I think the front of the look is sharp and, well, bold, for lack of a better word, but that colorblocking in the back looks terrible, as does the slit in the back of the peplum.

I thought this was terrific. It felt like the centerpiece of the mini-collection, it was impeccably made, stylish, and very sexy. No, it’s not for the ordinary woman, but I can see a million starlets clawing each other’s eyes out to get their hands on this dress.

Oof. Everything about this, from the inexplicable bra cups as shoulderpads (?!?!?!) to the folded napkin skirt, screams of student work. I can’t say I expected more from Suede, who is much more remembered for talking about himself in the third person than any of his designs. But he looked so fucked up during this episode, I suppose we should be astonished he was able to dress his model at all. I was happy to see Peach go, but for me, it was a coin toss between her and Suede for the auf.

I’ll keep Andrae around just for the sound of his voice, but I’m hoping he pulls it together and sends something a whole lot more polished and finished down the runway. In my mind, the only thing that saved this from the auf was that unlike Suede and Peach’s looks, this had a concept. It was a terribly executed concept, but at least thought and creativity went into this, even if the result was kind of a hot mess.

Well, for anyone who thought Joshua’s taste level might have improved since we last saw him, you’re in for a disappointment. No matter how gigantic the pants are, I can’t ignore the fact that she’s practically naked from the waist up, and that “top” looks like it’s falling apart.

Like anyone with two ears and a brain, I find Joshua almost unbearable, but even I cracked up at the way he deadpanned a high-pitched, “WENDY PEPPER!” at the camera upon meeting the legend herself. And although it was silly and over-the-top like everything Joshua does, I had to love how he waxed nostalgic about watching Wendy on Season 1 with his mom. Joshua’s my age, so when I realized that we actually share that memory, of being around 16 years old and watching Project Runway with our moms and loving to hate Wendy Pepper together as a weird little family tradition, I had to hate him just a little bit less.

—
All photos courtesy of Lifetime via New York Magazine.
—