The designers go back to school and things get craftsy, dear readers.

The Challenge: The designers ride a school bus to P.S. 212 Elementary School, known for its arts program, and are tasked with everyone’s favorite unconventional materials challenge. They spend four minutes tearing through what is either an art classroom or a training room for young drag queens to grab the necessary items.

Guest Judge: Gabourey Sidibe and Michael Urie, who should be permanent additions to the judging panel. Gabourey in particular was full of hilariously fantastic one-liners. (Example: “Sometimes I judge clothes based on whether Beyonce would wear them.”)

I had to laugh when Isaac basically said he didn’t give a damn about Christopher’s anti-bullying inspiration for his look. Like everything that comes out of Christopher’s mouth, this story felt absurdly rehearsed and geared to manipulate the judges (and audience) into rooting for him, so I was glad that Isaac made it clear he liked this dress because of the dress, not the story behind it. Story aside, I also thought this dress was fantastic. I think the necklace and purse are made of the same toys I watched my boyfriend’s 2-year-old nephew play with over Skype the other day, so I thought those pieces were absolutely brilliant. The dress is chic and fashion-forward. I didn’t think it was the most innovative look on the runway, so I wouldn’t have given Christopher the win, but it’s certainly the best look I’ve seen from him to date.

Elena’s histrionics make me think she’s off her meds this week, but she certainly took her obnoxious pills before filming this episode. She whined about another designer’s work, “It looks like a Lady Gaga dress from ten years ago, and I would know, because I designed a dress for Lady Gaga.” Okay, except Lady Gaga WASN’T EVEN FAMOUS TEN YEARS AGO. If you’re going to act like a know-it-all, at least have something to back it up. Now, as for the wildly overpraised dress: I still don’t get it. This got rave reviews from the judges, but it looked like a dress made out of paper, and badly made at that. Those strange cups the judges loved – I found them hideous. And this is just paper version of every dress Elena’s already made. 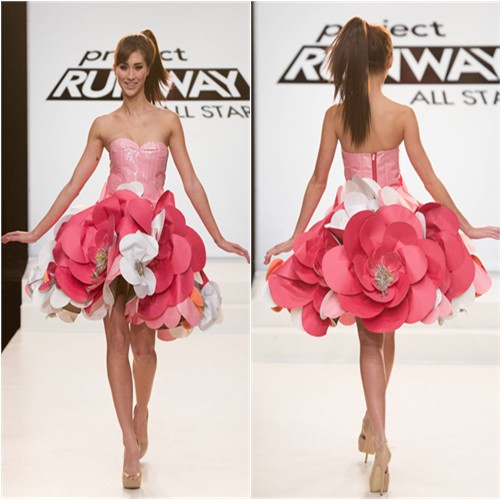 I don’t know that I have the words to express how much I hated this look. This is the dress a four-year-old Disney princess would imagine during an acid trip. It was constructed so well that Irina had no chance of being placed in the bottom three, since her competitors made things that literally fell apart on the runway. So I’d have placed this look in the safe pile too, since there were hotter disasters to deal with. 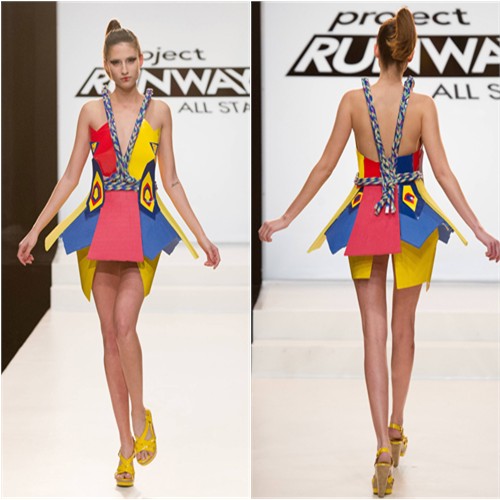 Jeffrey’s look actually photographs shockingly well, considering what a disaster it was on the runway. You could see the poor model’s EVERYTHING – she was completely exposed on the bottom. It’s almost offensive how little regard Jeffrey has for the female form, how little he considers actual women and their bodies, even ideal model bodies, when creating these garments. He retorted, once again, that he didn’t feel this look needed to be “wearable.” Well, it didn’t need to be something a woman could wear to the grocery store or a cocktail party, but yes, you should be able to PHYSICALLY GET IT ON ANOTHER PERSON’S BODY. The fact that no one was eliminated from the competition during this episode was a huge disappointment to me. There were exposed vaginas and dresses tearing at the seams during this episode, and everyone gets to stay? What new and improved kind of crack are these judges smoking?!

Oh, Korto. Girlfriend kind of fell apart this week, creating an amazing neck/shoulder piece and virtually nothing else. The bottom of this thing was an absolute nightmare, and the binder clips were just awful. I still would have ranked her above Jeffrey’s and Mychael’s garments, if only because Korto managed to cover her model’s vagina and keep the dress from falling apart during the runway show. But like many of my dear commenters, I’m still waiting for the “wow” moment that I know Korto is capable of. 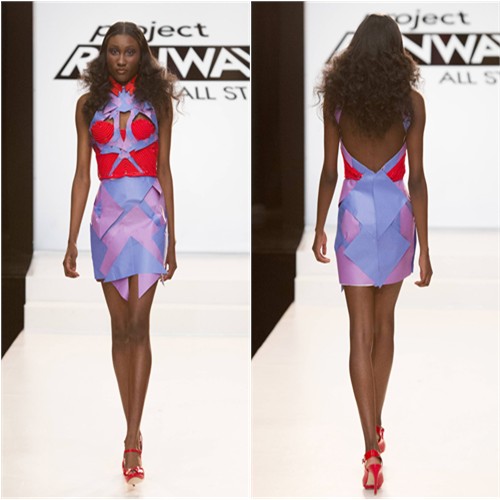 Poor, poor Mychael and his ripped paper dress. I loved his color palette, but my compliments end there. He’s lucky the model was still wearing a dress by the time her runway walk was finished, with the way this was tearing with every step. 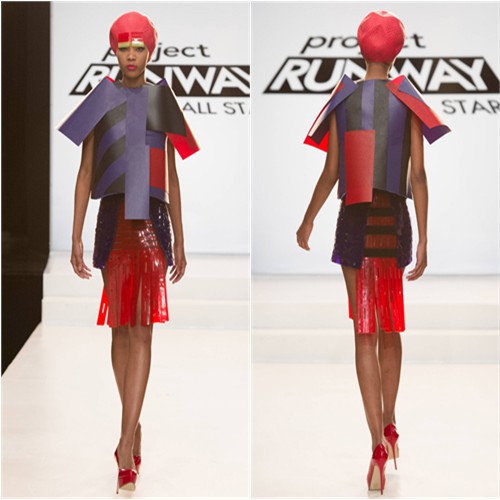 This weird little blouse was the only paper-made item that I found fashionable and interesting. I don’t even know what that skirt is made of, but it’s pretty damn awesome. And the hat, which is actually a KICKBALL? What a phenomenally creative idea! I didn’t love it at first, but the longer I looked at this outfit, the more surprised I was that Seth Aaron didn’t make it to the top three.

Viktor was wearing a hot dog tee shirt during parts of this episode, and even THEN, he was fanning himself with a handheld fan. I don’t know what goes on in that boy’s mind, but I absolutely love it. This dress was the clear winner, in my opinion – the way those broken rulers moved and shook like a new-wave flapper dress? To die for. Gabourey said it was the only thing she saw on the runway that she’d want to wear, and I wholeheartedly agree.