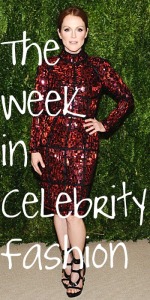 Good morning, dear readers! Pour yourself another cup of coffee and let’s get to judging.

What a look, dear readers. The mosaic-like tiles in all those metallic shades of crimson; the ridiculously flattering black stripes; the badass strappy shoes that call back to the stripes in the dress perfectly. Fuck whoever said redheads can’t wear red – Julianne Moore laughs in the face of your fashion limitations. She plays by her own deliciously unpredictable rules.

This was my Spring 2014 red carpet prediction for Diane Kruger; though it’s a touch too long on petite Nicole Richie, it’s still a fabulous and incredibly unusual look. The boldly colored stripes in the skirt remind me of Hailee Steinfeld’s amazing dress from the 2011 SAG Awards (one of my favorite looks in red carpet history), and I think the shape of that crop top is really interesting. The floral embellishments on the shoulders bring some romance and softness to an otherwise modern look.

I’ve grown weary of peplums over the last few months, but at least model Joan Smalls gives us a new, two-textured take on the ubiquitous trend. And honestly, regardless of how you feel about that particular trend, this olive green color is a delight on her. And the asymmetrical cut looks positively flawless on her.

The perfect balance of princessy and pure sex. That iced blue color and the delicate, feminine draping give things a romantic vibe, even with the keyhole in front, but the cut-outs on the side were a delicious, sexy surprise.

I love how much Pharrell loves Lanvin. It makes me really happy, even when his too-short pants tend to ruin an otherwise supremely fierce look. The gray jacket is darling, but the blue shoes? Those would be works of art, if his bare ankle wasn’t exposed.

Ms. Nyong’o continues her streak of red carpet excellence, this time juxtaposing her sweet, youthful dress with hard, fierce accessories. The boxy clutch and the truly stunning straps on those shoes? Perfect styling choices. This woman continues to wow me more and more with every look.

Definitely the kind of gown you need to be a supermodel to pull off, lest you appear to be drowning in fabric. Crystal Renn makes it work, of course, but few others could.

I’ll say it, dear readers: I am OVER Rooney Mara and any monochromatic looks that make her look like she’s wearing a cocoon. This has gone on way, WAY too long. No matter how interesting or surprising something is when you’re wearing it for the first time, by the eight thousandth time, we’re really, REALLY over it.

Love the dress. The matching navy satin accessories are better worn with a bridesmaid’s dress than a red carpet cocktail dress, but my love of print and color outweighs my distaste for matchy-matchiness. Oh, and can my hair look like that all the time, please?

I’m calling it now – I’m officially over Natalie Portman in anything black, white, and Dior. Of the twelve designer looks she’s worn since March, eleven of them have been Dior, and seven of those looks have been black or white. For the love of God, Natalie, branch out a bit. It’s not that you don’t look good in monochromatic Dior – it’s that you’d look good in anything, so take some goddamn risks for a change.

YUM. I know sexiness is in the eye of the beholder, and People Magazine isn’t an authority on literally anything, but I’ll never understand how they landed on Adam Levine for this year’s “Sexiest Man Alive.” Not when Idris Elba exists and wears Burberry and is UNSTOPPABLY SEXY, for God’s sake.

Maybe I shouldn’t write posts first thing in the morning, because I feel like I’m starting every sentence with, “I’m tired of [insert starlet’s incessant love of wearing the same thing over and over again here].” So let me pause for a few more sips of coffee before I continue this rant.

I am so fucking exhausted of trying to talk my way around Gaga’s year-round-Halloween hair and makeup. Especially when she’s wearing what is probably my favorite Gaga outfit in months, if not years. Thom Browne and Lady Gaga are a match made in drag queen heaven, as you can see from the way she’s working the shit out of this suit. The proportions are kind of a mess, because Gaga is 5’1″ and wearing eight-inch heels, which can be hard to make work with a skirt that hits at the mid/lower calf, like this one does. But the pearl-covered platforms, the stuffy, almost Victorian-feeling suit, the gloves – all of them are insanely fabulous and perfectly Gaga. But the “I’m trying so hard to be hideous because THAT’S ART” hair and makeup? I just can’t take it anymore, dear readers.

Scarlett, you’ve been on the red carpet for something like fifteen years. Why are you dressed like a tween WB star who hasn’t learned how to style herself/hire the right people to style her yet? She doesn’t look terrible, just very, very confused about how to dress. And at this point in her career, there’s no excuse for that.

Oh, God. Vanessa Hudgens in 1950s housewife hair? This is going to give me nightmares. I like the shoes, but everything else about this is mismatched and just plain awkward.

Fashion-wise, I’m trying to be on Lena Dunham’s side, but it’s hard when she wears things that don’t even come close to fitting her. It’s not like she’s buying this off the rack and wearing it that night, like us normal people – she has the option of getting things tailored to her. So why she refuses to do so and instead wears the world’s least-flattering, droopiest bodice is beyond me.

I’m really not loving this high-fashion apron, or whatever the hell she’s wearing. It’s just plain sloppy, and painfully overworked, and it’s not remotely flattering. There’s something very 1970s about the styling, and not in a new-and-improved way. Just in a sad-lady-at-a-disco way.

Call me when you wear a trend that didn’t get worn to death three years ago, okay, Rosie? For such an obscenely beautiful woman, she makes some painfully ordinary fashion choices.

First rule of faux-nude dresses: they absolutely CANNOT get wrinkled. Because they’re supposed to look like your skin, and so any wrinkles in the dress look like wrinkles in your body, which can be a bit off-putting on a 24-year-old starlet. But wrinkles aside, I still think there’s nothing saving this dress. The way it’s shredded into strips on the sides just looks kind of dingy and sad, especially since the length is about a foot too long on her. The silly putty shoes were a boring choice, and this faux-woodland-creature aesthetic just doesn’t work on Lily.

I don’t know where to begin, dear readers. The square, napkin-like sleeves? Awful. The “look, it’s my thigh! Isn’t that fascinating!” skirt? Awkward and ill-fitting. And the green satin shoes? Has she gone completely insane?