Previously: The designers’ visions of the future left us praying that time stands still.

The Challenge: The contestants are whisked off to Red Robin, where a gaggle of male models are wearing suits from different eras and holding fast food and cocktails. The designers will each be assigned a different suit to use as inspiration and primary materials. They have one day to create a high-fashion womenswear look with the mens’ jacket and pants as a prominent part of their design. Can anyone explain to me what this challenge actually has to do with Red Robin? No? Okay then. And was there a reason Sandhya got to choose everyone’s suit for them, other than to make the other designers hate her even more than they already do? Also no? Great. Glad we’re all on the same page.

Most of the suits aren’t too bad to work with, but of course, there’s two or three in weird, difficult materials. Wouldn’t this be a better competition if they all had to work with corduroy or leisure suits? It just seems unfair, not to mention tailor-made to cause interpersonal drama instead of interesting fashion. And the rule about the menswear pieces being “prominently displayed” in the final design was completely thrown out the window so that the judges could award Amanda yet another undeserved win. Why bother making restrictions on the challenge if you’re not even going to enforce them? Sigh. At least Nina said the word “vagina” a few times. That was fun.

Guest Judge: Bethany Mota, who is apparently a fashion vlogger? Come on, show, bring on a guest judge who has more to say than “I love this! It’s FIERCE!” Or, if you’re going to choose a random-ass fashion blogger, CHOOSE ME. I’m short and vaguely annoying just like Bethany, except I have a more extensive vocabulary.

Cute and chic, and it looks like something Emmy Rossum or Lily Collins would wear on the red carpet. Not the most innovative or original thing on earth, but the crop top is on trend and the skirt is very pretty. It wasn’t really good enough for the top three, but of course the judges wanted to have a bottom-to-top story for him. He used the word “redemption” twice this episode – that was a little heavy-handed even for Project Runway. They’re not even trying anymore.

This looked way better on the runway than it did approximately ten minutes earlier in the workroom, but it is a bag of bullshit that Amanda snagged the win AGAIN. How many half-dresses covered in fringe are they going to hand her the win for? I agree with the judges that the way the fringe was crossed and layered in the front was interesting, but the fringe in the back was a mess. I’m shocked the model wasn’t tripping all over it. This was a perfectly fine if slightly craftsy dress that belonged nowhere near the top three.

More importantly, I don’t think this completely met the requirements of the challenge. That reddish printed fabric is the suit jacket, and she covered up almost all of it. That was smart from a design perspective, because it wasn’t a very modern print, but I don’t think this was a “prominent” use of the original suit by any stretch of the imagination. Of course, when the judges want to justify their decision to bring back one of the least memorable designers in the show’s history, they have to give her the win for every average hippie-dippy dress she sends down the runway. Giving two different designers two wins in the first four episodes of the season is INSANE. We’ve barely learned the names of half the other designers, while Amanda and Sandhya never seem to leave our screens. It’s exhausting.

The slit in that skirt is way too short, and the bottom of this look generally lacked creativity. But I like the sculptured top and the surprising backless effect. I’d love to see Char get some recognition for her skills, but this wasn’t one of her better looks. I’m hoping she’ll be back on her game next week. 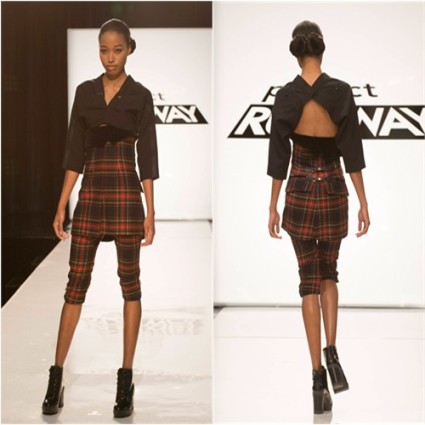 I’m still not really sure what this is. I definitely like the back of the tartan girdle-skirt-pants hybrid, because the buttons and pockets are adorable. But that shrug top looks very awkward from the back, and that folded-over velvet portion of the bottom is also extremely confusing. I think Emily just tried to do a few too many things in this outfit, and suffered for it. I probably would have put her in the top three if she had streamlined this to something a little more understandable.

The fabrics look a little bit dreary in pictures, but this was one of my favorite things on the runway. I think Fäde was one of the only designers who really understood and followed the challenge. He mixed prints and fabrics like a power-clashing champ, but the result was deceptively simple. The draping of that sort of poncho-esque crop top is brilliant, the sleeves are cool, and his model looked stylish and powerful. Definitely worthy of my top three. 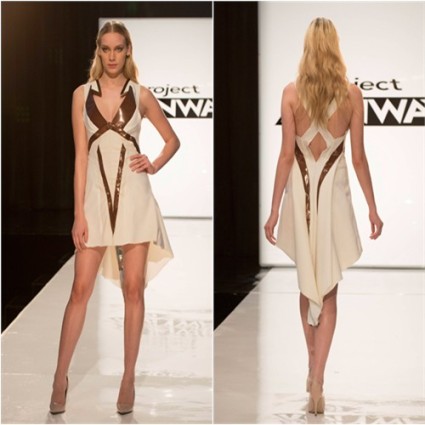 Hernan did not stop bitching and moaning from the first moment of the episode that he couldn’t get inspired by his hideous suit. Come on, buddy. It’s fabric. It’s not even the worst fabric of the group. Consider yourself lucky that you don’t have to make a dress out of potatoes. He kvetched about Sandhya picking on him, and how she’s different off-camera, and she’s threatened by him, and all of this just made him seem like a big baby. He also called her a bitch during the runway show – he might have meant it as a joke, but it didn’t sound like one, and Sandhya hissed, “Don’t ever speak to me like that again.” Drama like this is boring to me, but respect to Sandhya for standing up for herself, because Hernan was completely out of line. (If that’s even what happened. The editing here was a little bit suspicious.)

Maybe if Hernan had spent a bit less time blaming Sandhya for his problems, he would have had time to make an actual garment. Tim told him early on that the vinyl was not even remotely working because Hernan was trying to drape it like fabric, which it is not. But Hernan never did anything about this completely glaring problem, and barely got this thing on the model in time for the runway show. His dress was so full of pins, his model was BLEEDING PROFUSELY from it, and he had to cut the hem with a pair of scissors at the last moment. THEN he straight-up lied to the judges about how his positively ancient fabric was literally falling apart when he tried to touch it. Did he really think he was going to get away with that bullshit? Did he really not know that the judges actually inspect the garments up-close? Even if this dress hadn’t been awful – and it was – he should have gone home just for that stupidity.

Nina thought the giant V on the dress made the model look like a “vagina superhero,” which was a hilarious comment, but I disagree. A vagina superhero sounds AWESOME, and this dress was anything but awesome.

Kini finished his look hours early and spent the rest of the episode lounging around and making everyone hate him for having so much extra time. I am blown away by his construction and his speed – this is absolutely impeccably tailored. But I won’t pretend this is even remotely original. It’s Cushnie et Ochs-meets-David Koma, with a sprinkle of McQueen. There’s not an original thought to be found here. But it was sexy, chic, appropriate for the challenge, and stupendously crafted. That was enough to earn it a spot in my top three.

Jessa was insufferable this episode, whining about how she and Kristine were both making motorcycle jackets, but not doing anything to actually differentiate hers from Kristine’s. This looks dated, unoriginal, and not particularly well-fit. But there were more noticeable disasters on the runway, so she lives to see another day. 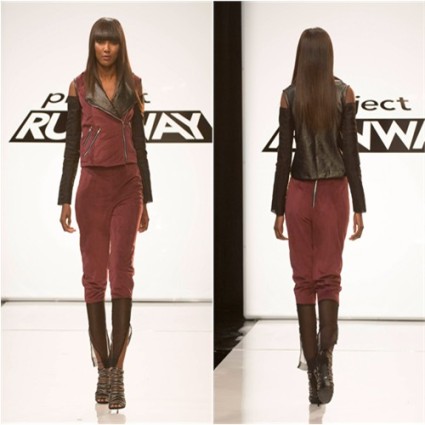 Yes, the velour pants look terrible, but Kristine got a shitty fabric and actually tried to make the most of it instead of bitching about how terrible it was. She didn’t try to hide the fabric beneath twenty pounds of fringe, and I think that was brave. Of course, those pants are hideously unflattering, and the organza at the bottom doesn’t make any sense, but at least the girl made an attempt at originality and tried to fit the constraints of the challenge.

Mitchell’s response to his leisure suit was “HAAATE IT, HATE IT HATE IT HATE IT,” and I admit, I almost laughed. He actually did get one of the two worst suits to work with, so I understand his frustration a bit more than Hernan’s, but everyone was being such a brat about their IMPOSSIBLE TO WORK WITH suits instead of just hunkering down and making it work.

Alexander mentioned that Mitchell’s dressed looked like he shoved his leisure suit into a Ziplock bag, and he was not wrong. It looks awful, and the bubbly-ness on the sides is making me cringe. I haven’t seen anything from Mitchell so far that actually convinces me he has good taste. Nina’s going to bite him in the ass for that soon.

From afar, this is just a good look, but up-close, this was by far my favorite thing on the runway. Samantha desperately needs to learn that all-black detailing does not pop enough on television, but the detailing on this was extraordinary. The pleating, the pockets, the safety pins, the asymmetry – it’s interesting and innovative and all-around badass. I can’t believe we had to sit through a discussion of what a genius Amanda is when Samantha still hasn’t gotten her moment in the spotlight.

The front of the top is funky, trendy, and wearable. Even the mustache printed on it is kind of hipster-chic. But the mustaches in back, which look like they’re silk-screened onto giant black band-aids, are way too much. And this skirt looks like a crafts project gone wrong. Sandhya’s look stood out from the crowd because it was colorful, but she was also the only designer who had bright colors in the suit she was working from. Because she was the only one who got to choose her suit. So she doesn’t get extra points for her use of color when no one else even had the opportunity to do the same.

This was terrible. Sean was the sole designer working with corduroy, which handicapped him a bit, but still, this was a nightmare. When the judges called him out on how shabby this looked, he explained that it was intentional. Their responding, “NO SHIT, WE WEREN’T BORN YESTERDAY” was kind of hilarious. Yes, Sean, darling, we know you made this deconstructed on purpose. IT STILL LOOKS LIKE SHIT. The horizontal strips of fabric don’t go all the way around the skirt – they’re tacked together on the sides by some extra vertical stripes, making it look like he made this skirt three sizes too small and it was too late to start over again.He should thank his lucky stars that Hernan got caught lying to the judges, otherwise Sean’s awful look paired with his back-talk to the judges would have sent him home for sure.

Next time: The designers have to create a presumably short/tight/shiny red carpet look for Heidi in the oh-so-brilliantly-named S13 E05 – Dress Heidi.