Also, this is flawless.

This gown. (My red carpet prediction for Elizabeth Banks.) This woman. (My fashion superhero.) Those earrings. (Can you die from the weight of giant-ass diamonds pulling down your earlobes? If so, Lupita is in trouble. But at least she’ll go out in style.)

It is almost unfair how spectacular she looks in this shade of blue.

It’s not my favorite aesthetic, but if you’re going to borrow a jumpsuit from a clown, this is the one to borrow.

A good dress that doesn’t even come close to fitting is not a good dress, Lupita.

I would like to give a warm welcome to red carpet newbie Daisy Ridley, who I am already in love with based on this press tour. She can dress! She looks like Keira Knightley and Lady Mary from Downton Abbey had a baby! The world’s most English baby! Anyway, things I love about this: the polka dots, the wavy bob, the possibility that she’s wearing an ear cuff or maybe that’s just weird lighting.

DAISY RIDLEY at the Tokyo premiere
dress by Chanel

See what I mean? This outfit could look like a Project Runway challenge that requires the designers to make a dress out of cheap window blinds and toilet paper. But Daisy just looks sweet and effortlessly chic. And looking “effortless” in Chanel can take a lot of damn effort.

If you’re very drunk, it looks like C-3PO is wearing this kicky Mary Katrantzou frock. So let’s all get very drunk. Also: SHOE GAME ON POINT.

Sorry, but I can’t unsee this:

This is eight kinds of terrible, but for her first major press tour, Daisy is doing a magnificent job thusfar. I’ll allow her the occasional ill-advised, insanely-proportioned suit.

A truly magnificent dress, though it’s a bit of a diva move to wear this to the premiere of a movie you’re not even in. I mean, that takes some brass ones. But Elizabeth puts her hands in those adorable pockets and flashes that brilliant smile, and you forget that this is kind of obnoxious and just love it. At least she was smart enough to go for low-key, faux-natural hair and makeup, otherwise I think this would qualify as what the kids are calling “thirsty.” 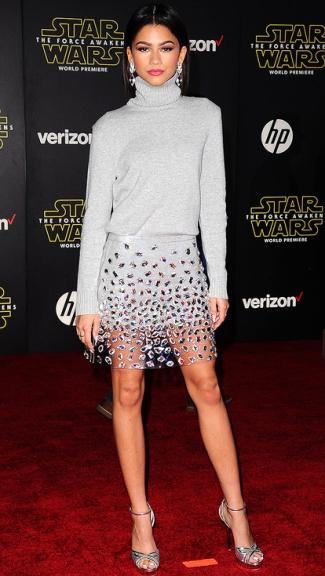 Give me a tiny bit more coverage with the under skirt, and I’m wearing this to every holiday party for the rest of my life. This is casual red carpet realness at its peak.

JOHN BOYEGA at the Los Angeles premiere
tuxedo by Versace

YOU GO, WITH YOUR PURPLE TUXEDO. I mean, this is kind of terrible, but he’s saving it with the glove, because he rescues you from having to take the tux seriously. Also, that smile is melting my heart.

Gwendoline Christie is so goddamned insanely gorgeous and poses with such intensity that she actually convinced me that I love this dress. Upon second viewing, it is clear that I love: 1) Brienne of Tarth, 2) the concept of Brienne of Tarth werqing the shit out of an Oscar de la Renta ball gown, 3) women who are six-foot-three, and 4) posing like you’re Beyoncé. This gown is actually quite terrible. But it can’t bring down Gwen. She’s fucking glowing.

You look lost. Are you lost?

Gina Rodriguez, your hair shines like you’re a Disney princess. You deserve better than this gown.

Is that train actually a sleeve?

Is that giant bow chained to her neck?

DID SOMEONE PAY FOR THIS TO BE MADE?

I have so many more questions. I will NEVER RUN OUT OF QUESTIONS.