Last night’s Project Runway featured the “unconventional challenge,” a favorite of this Diva, Tim Gunn, and anybody who loves to see the designers sweat. The challenge was to create a garment entirely out of items found in a party favor store, and of course the guest judge was my personal hero BETSEY JOHNSON. (What a perfect judge for this challenge – nobody does party clothes better than Betsey.) Of course, with every unconventional challenge comes some true inspiration and innovation (remember Daniel Vosovic’s garden party dress? How about Jillian’s twizzler corset?) – but some designers inevitably crack under the pressure. Let’s dive in and see who sank and who swam.

Design: AJ knew that the pressure was on him to create something spectacular for this challenge, because it’s so in his design aesthetic. Once he started trying to downplay the expectations of Tim and the other designers, I knew he was cracking under the pressure. The judges were right: this simply has too much crap all over it. It’s not cohesive, it just looks like he threw everything he could onto it. He needed to either refine the look and edit down his ideas, or go completely over-the-top and wow us with how fun and crazy he could be. This just looks like a bad Betsey Johnson knockoff. And the beads hanging in front of her crotch? Awkward.

Execution: The “fabric” on the bodice is strange and doesn’t lay nicely. Otherwise, it’s impossible to see what’s made well and what’s not, since there’s so damn much to look at.

Styling: Her eyebrows are dyed pink, which would have been a better idea if it were actually visible. All the accessories are stupid (except the shoes), but no more stupid than the dress itself.

Design: Genius. At first I, like many others, thought Andy bit off a bit more than he could chew with this dress, but he somehow pulled it off. It’s easy to make a party-favor dress look girly and silly; making it look dark and interesting is a totally different challenge. The shape is interesting, the back is great, and the pattern is obviously killer. And that faux-leather glove, made out of balloons? Perfect.

Styling: Amazing. The severe high ponytail, the over-the-top black eyeliner, and the glove were perfect, because they were exactly how the real woman wearing this dress would style herself.

Design: Hello, Gaga! That shoulder piece is totally fierce and totally copied straight from Lady Gaga’s costuming department. I still love it, but it doesn’t win any originality awards.

Execution: Anybody else think that April just threw on those black tights because she realized the dress was way too short? That’s what it feels like to me. And although the shoulder piece is great, the rest of the dress looks like paper. (I know it is paper, but it shouldn’t look like paper.)

Styling: Cool bag, and again I’m digging the heavy eyeliner. But the Lady Gaga wearing this dress would not have a simple blowout as her hairdo. (Although, anything that covers up this model’s ears is a blessing.) 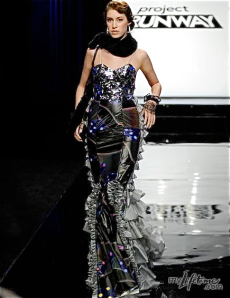 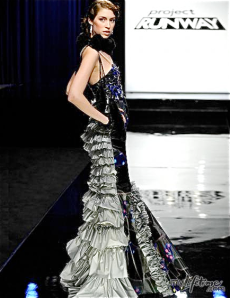 Design: I am so happy this dress was made, if only because it made Michael Kors say, “She looks like a transvestite flamenco dancer at a funeral.” There’s no way I can find a wittier or more succinct way to describe this dress, so I’ll leave it at that. But I will say this: He made something awful and complicated, while Sarah made something awful and boring. I knew they’d pick the boring one to send home, but I have to defend Sarah by saying this: her garment may have been worse, but I know she is capable of more than that. I can’t say the same for Casanova – and that’s why he should have gone home.

Execution: The construction wasn’t really the problem, it was more the fact that Casanova has no taste whatsoever.

Styling: The gloves are pretty, and the plush puppy scarf was kind of a cool idea, but there’s obviously way too much happening here. 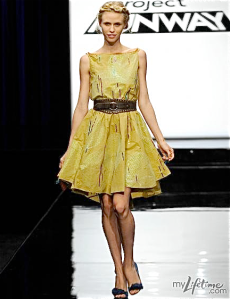 Design: Cute, flirty, and fun, but Christopher didn’t step outside the box for this one. It’s adorable and totally wearable, but think about the workmanship that went into Andy and Valerie’s designs. This can’t compete with that.

Execution: Pretty good. The dress mostly doesn’t look like it’s made out of paper.

Styling: Love the blue shoes – they pop against the color of the dress. And the hair is perfect for the adorable real-life woman wearing this dress.

Design: I already hate Gretchen, but even I had to agree that this was a solid look. First of all, she made separates, which is rare in general on this show, but particularly rare in unconventional challenges. People are so thrown off by having to use new materials that they tend to stick to a basic cocktail dress silhouette with one or two twists and turns to seem less boring. The skirt is definitely wearable – 1920s flapper meets American Apparel. The faux denim jacket is pretty awesome, and I like the blouse as well.

Execution: Pretty excellent. She may be a total bitch, but she’s a bitch who knows her shit.

Styling: The boots were an AWFUL choice. She should’ve gone with little badass studded black heels or booties. And again, the girl wearing this outfit would not have a perfect California girl blonde blowout. And that bracelet has literally nothing to do with the rest of the outfit. 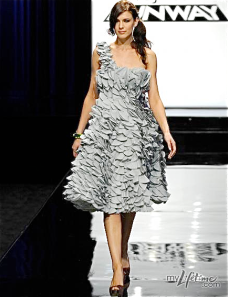 Execution: It’s called tailoring, darling. The dress shouldn’t make the model look thirty pounds heavier. The fit is all off.

Styling: A weak side ponytail and an ugly green bracelet? Ivy, you’re going to need to do better than that. I mean, if you’re not hospitalized. 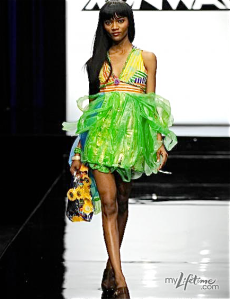 Design: AGAIN Kristin got away with sending something butt ugly down the runway without having to face the Wrath of Nina! This is three weeks in a row that Kristin has delivered something awful and gotten thrown in the ‘safe’ pile, further proof that 17 designers is just too damn many to start with. Someone needs to hold this bitch accountable.

Execution: The trim around the neckline looks elementary. And I can’t sew on a button, but I bet I could’ve constructed the skirt better than that.

Styling: Some ugly bracelets and a tacky bag. And is she wearing CLOGS?! I may vomit.

Design: You know, we don’t see enough full-length gowns in these kinds of challenges (no, Casanova’s tranny-flamenco-funeral gown doesn’t count). So kudos to Michael C for going there. And this is actually pretty fucking fabulous. I don’t think this should’ve been overlooked as a contender for the top 3. The shoulder piece is really great

Execution: I’m not sure I love where the material changes halfway down the skirt. I can’t tell if that’s intentional or not, and it hangs awkwardly. But the top looks great.

Design: Can anyone tell me how that top matches that bottom? I love the distressed look of the skirt and the shininess of the top, but only the look of the fabrics interests me. The shape and fit and proportions are all a mess.

Construction: You’ll need to view the runway show yourself to understand how bad the construction was on this garment. But the top and bottom move like they’re on two different people. It’s atrocious. And the stiffness of that skirt is terrifying.

Styling: Cool bracelet. Hair and makeup is far too boring for this alien-dress.

Design: Honestly? It’s a little boring. Mondo has skills, but he didn’t show them off here. Using those poofy leis to make a skirt was about as basic as it gets. And the top – well, it looks like she’s wearing a corset made of plates. And once AGAIN, I think those black tights were thrown on just so we didn’t get a peek at the model’s vagina.

Execution: Pretty terrific, actually. The skirt flares out in adorable way and the details on the bodice are very symmetrical, which must have been difficult since, you know, it’s plates.

Styling: The black tights over-emphasize the ballerina element of the outfit, and the jewelry looks like something I bought at Claire’s when I was twelve.

Design: My boyfriend Nate pointed out something interesting about Peach and her tween-tastic, girly designs: It seems like she’s overcompensating for her age (she’s 50) by designing these uber-youthful, tacky clothes. And I agree wholeheartedly that this is Peach’s biggest problem. She has a serious misconception of what young women wear (whether that’s due to her age or her ignorance, I’m not sure) but insists upon designing outfits that only the extremely young and trashy would be interested in wearing.

Execution: What the fuck is up with that bodice? It looks like it was molded out of a cast. It’s dreadful. And don’t think you’re so creative for using cupcake holders – we’ve seen the coffee filter dress on this show before. The skirt is pretty well-made, but it’s still the tackiest thing since leopard print fanny packs.

Styling: Little-girl hair, baby pink lipstick, a pink bracelet, and a matching purse. Now I really think I might vomit.

Design: Sarah. You were my girl! You were the one I liked most when I read your interview and saw your portfolio before this season aired. There’s always one designer who I become attached to because I feel like he or she is designing for me. (Jillian Lewis, Kenley before I realized she was a plagiarizing bitch, Jeffrey on his good days, etc.) But you had to stick to a dress you knew was awful, and in doing so, you broke this Diva’s heart. But another word in support of Sarah: she at least knew she was making a train wreck. Casanova thought he had designed a couture gown. I’ll take someone with a good head on their shoulders than a loon who thinks he’s Oscar de la Renta any day.

Styling: I don’t know. Is she an ice dancer? Is she Wonder Woman? Is she queen of a “Tropical Wonderland” themed prom? 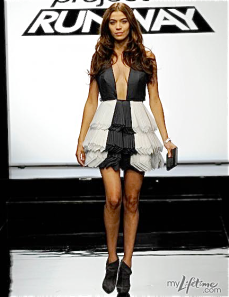 Design: Valerie said it best herself: “Always a bridesmaid, never a bride.” But keep it up, Valerie. Those who keep cranking out consistently killer looks without scraping up the win will get what’s coming to them eventually. And you’ve got some seriously good designer karma headed your way. This dress is sex on a stick, total perfection. Wearable, loveable, and I’m surprised Betsey didn’t add it to her next collection on the spot.

Execution: Flawless. It ain’t easy to make a perfect neckline out of unconventional materials, but she nailed it. And all 600 napkins she used look absolutely perfect.

Styling: That model looks 50 years old – not sure if it’s the makeup or the face. But those little booties are fantastic.