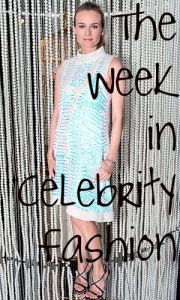 It wasn’t a terrible week in fashion – in fact, most of this post is in the “boring but pretty” or “interesting but sort of unflattering” category, which is a heck of a lot better than “completely fug.” But there were also no stand-out WOWs this week, which is how Diane Kruger snagged the top spot in a very unflattering Chanel dress. I mean, she looks several months pregnant, and Diane is an itsy-bitsy-skinny-minny. So it’s an evil dress indeed that makes a model-esque woman look anything but. However, the iridescent thing is sort of awesome, and a lot of fun, and it’s the type of slightly kitschy but kinda glam aesthetic that Diane tends to rock. Also, yummy shoes.

A chic, mod-yet-modern dress, but it’s a bit too painfully matchy-matchy. I’ll accept the black purse and shoes, but did she need to do black-and-white jewelry, too? The cuff pushes this over the top. And I think the geometric, sportswear-like quality to the dress doesn’t work with a girly, bow-adorned shoe. The same shoe sans bow would have been so much better.

Love the color, love the fit, love the hair, makeup, and cleavage. Two major flaws: The asymmetrical skirt looks accidental, like she got half her dress caught in the limo door and it tore right off as she stepped onto the red carpet. Second, jewelry! This kind of thing begs for a shiny necklace or bracelet. Don’t let the dress and your fierce body do ALL the work.

I saw this at the top of every “best dressed” post this week. I’ll concede that she looks beautiful, but am I supposed to have a digital orgasm just because Ange is in a black gown I’ve seen a hundred times (a sleeveless scoop neck Monique Lhuillier version on Olivia Wilde two weeks ago, for instance), paired with your basic black peep-toe pumps and black purse? In the immortal words of Cher Horowitz, as if.

The dress is fabulous and fits her perfectly. She looks impossibly thin, and the color is perfect for her skin tone. The purse is fine and the red lipstick would be okay, but with those shoes and the orange-red Sundance backdrop, this is a little mental. The backdrop she can’t help (perhaps she even planned her color scheme around it), but those shoes were clearly a mistake. We all love a pop of red, but too much of a good thing is a big old mess.

Kirsten Dunst wore a full-length version of this Valentino dress to the Art of Elysium Gala last week, and I prefer that one to Kate’s cocktail version. Her hair and face are a little severe, and that bow seems oddly placed. I’m nit-picking, yes, but that’s my job, dear readers.

Well, it’s not like we’ve never seen a white lace Dolce & Gabbana dress on the red carpet before. [Editor’s Note: See Amber Heard last month; Rosie Huntington-Whiteley in July; Cat Deeley, Jessica Alba, and Selena Gomez, all in June; Uma Thurman and Alessandra Ambrosio, in May; Chanel Iman at the 2011 Met Gala; Kate Bosworth in March, Diane Kruger and Jennifer Lawrence in February, Blake Lively last January, Nicole Kidman back in 2010, and more. I’m exhausted now.] But there’s something refreshing and delicate about this one – I’m not bored by a lace LWD for the first time in awhile. The skinny belt and classic pumps help, as do the bangs and doll-like makeup. I can’t quite see the hair, but I fear that it’s treading on Swedish milkmaid territory, and I cannot in good conscience support that.

How many times do I have to say the same fucking thing? Cover up that mop on her head, and you’ve got a fabulous outfit. The dress is fabulous and the purse is adorable. The shoes are a bit precious for me, but I wouldn’t mind it if she didn’t look like her wig got ran over by a limo right before this event.

Give me more to work with, honey. I can’t be snarky about something this boring. Your tits look great, but other than that, meh.

ALICIA KEYS at the Producers Guild Awards // top, skirt and jacket by Dolce & Gabbana, purse and shoes by Jimmy Choo

The jacket is fabulous, and the skirt would be great if it didn’t cut right across her waist like that. But the bustier top is kind of unflattering too, and the accessories are too boring to even discuss.

But really, darling, when are you going to do something about that hair?

GABRIELLE UNION at the BET Honors // dress by Emilio Pucci

I think those silly little sleeves are very unflattering to the arm, and the shoes are completely boring and seem to be a size too large.

Shailene, you are far too beautiful to be obscured by all that shapeless velvet. You look like a little girl at a funeral, and it’s making me depressed.

EMILY BLUNT at the Sundance Film Festival // dress by A.L.C.

Color, Emily. Do not fear it. Embrace it.

Can she put her giant tits, peep-toes and mind-numbingly boring, one-size-too-small dresses away and leave us all alone, for God’s sake?

Yes, Ellie, LBDs with cut-outs are very in – just ask Rooney Mara – but in this case, you look like you fucked Edward Scissorhands in the limo. (Someone had to say it.)

Darling, whoever told you lilac was your color was lying. That lipstick is dreadful and this whole thing feels very Diana Ross, and not in her peak. And while I love a studded Louboutin like it’s my job, these were all the rage back in the summer of 2010 when Heidi Klum, Rihanna, Dakota Fanning, Kim Kardashian, and Ashley Tisdale all donned this exact pair. You’re a little late to the party, Naya, but at least you’re in good company!

MADONNA at the New York premiere of W.E. // gown by Marchesa

Her hair looks fabulous, but all that tulle is about as stupid as I can imagine. It doesn’t look artistic and couture, it looks sloppy and disheveled. Notice how the sleeves cover her hands – she’s hidden her hands in gloves at the Golden Globes, the London W.E. premiere, and a London photo call for the film, all in the last few weeks. It’s getting increasingly weird. Anyway, the gown could have been great if it hadn’t been so determined to look completely fucking absurd.

5 responses to The Week in Celebrity Fashion, Part 1