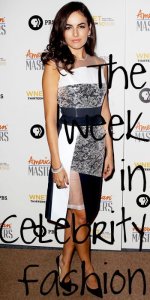 Another week, another score of celebrities to judge.

I’ve had a crush on this dress for months – it was my Spring 2013 red carpet prediction for Jessica Alba – and I love it on Camilla. Top it off with simple, sexy pumps, perfect hair and makeup (this woman’s eyebrows are unstoppable), and plenty of bling, and I’m a happy little fashion blogger.

Shit, you guys, Lucy Liu can fucking bring it. That double-breasted coat-cape-poncho hybrid shouldn’t work, but it totally does, particularly with that astounding cuff bracelet. The purse might be a bit much with the coat, but it totally makes the outfit when she removes the coat. See:

She’s perfection. The gown is great, but not amazing – it’s the coat in the first picture and the purse/cuff in the second picture that complete the look.

This was my Spring 2013 red carpet prediction for Camilla Belle, but ohmygoditsdelicious on newly-brunette Dakota. The studded belt with the star-spangled boxy clutch? A killer combination. I’d have loved a brighter lip, and I think this look calls out for a touch of jewelry, but otherwise, adorable.

Not her best work, but a strong showing from Emma Stone this week. It’s hard to wear these colors outside the holiday season, so enjoy it while you can, darling. She could have had just a little more fun with the styling, though, and I’d prefer a lot less blush. Also, I’m not sure the sideswept bangs are really working for her – her face looks strangely tiny surrounded by all that blonde hair.

Did Annie lose a fake nail, or is her pinkie finger intentionally a different color? I’ve been looking at this picture for days and didn’t notice that until this moment, and now I can’t see anything else. Regardless, this is the best her hair and makeup have ever looked, and I love the weird shape of her shoes. The LBD would be a bit more flattering if it were just two inches shorter, I think, but then, I’m difficult to please.

I’d love the dress if it weren’t for that giant horizontal striping on the bottom – it makes this look like a comforter, not a gown. But otherwise, I love the dizzying effect of all the green and white stripes, and the bracelets and matching headband keep this looking youthful and utterly adorable.

Beautiful, but close to boring. Love the lipstick.

This exact dress wasn’t one of my red carpet predictions, but I did predict that Keira would wear a Valentino gown in the same print, from the same collection, so that’s sufficient to prove that Keira Knightley reads this blog, isn’t it? But I digress. Love the nude Peter Pan collar, the belt, and the lace underlay, but the Mary Janes might be a bit too twee for an already girly look. But once again, terrific lipstick. Give your makeup artist a fabulous Christmas bonus, Keira!

The black nails and toes might be overkill, but it’s a Stella McCartney dress I actually like, which is an achievement in and of itself. It’s hard not to like a simple, wearable dress with pockets, and Cameron looks much more put-together than usual. It’s all a bit matchy-matchy – the styling isn’t particularly inspired or forwarding-thinking – but it’s a lovely look all the same.

I’d keep the beautiful necklace and the diamond bracelet, but nix the watch (and other bracelets, I think?) on her right hand. Also, what is the deal with the black pumps this week? Did a stylist go on a rampage and steal all the fabulous shoes for himself?

Yes, it’s yet another body-con McCartney dress, and I’ve seen it way too many times to be impressed, but Alicia looks better than she has in quite some time.

Love the hair, the fascinator, the makeup, and the dress, but Christina, if you don’t get rid of those black peep-toe platforms, I will pry them from your cold, dead feet and throw them in a fire.

LEA MICHELE on The Tonight Show with Jay Leno
top and skirt by Rag & Bone, shoes by Giuseppe Zanotti

The apocalypse has come, dear readers: I can’t see Lea Michele’s sternum! OR her upper/inner thighs! I mean, she’s still baring a midriff and that awful ombre hair, but still, this must be a sign of the Rapture.

Jennifer Lawrence, I love everything about you, but honey, you need to fire that stylist – and fast. I love a good suit, but whoever thought you were ready for that scarf and those bangs clearly doesn’t know you at all. Also, those shoes look kind of terrifying.

Oof. No, Kerry – from the poor fit to the wobbly draping to the bow-adorned skirt to the Barbie-on-acid color to the matching lipstick, this is a hot disaster.

I don’t know what it is, but something about this look screams “fashion victim” at the top of its fucking lungs. From the stupid flipped hair, to the overdone eyeliner, to the colorless dress that’s both bow-adorned and cut-out, to the distracting shoes that look about three sizes too large – it’s underwhelming and a little bit desperate.

I’d thought Alexa had turned a new leaf, but unfortunately, you can’t force a hipster to buy a hairbrush. Also, I hate literally everything she’s wearing.

YOU ARE SO MUCH BETTER THAN THIS, DIANE.

Words have failed me, dear readers. I’d ordinarily just tell you to look at the picture, since it’s worth a thousand, but I’m afraid we all may go blind if we stare at this atrocity much longer.

Need more? Check out The Week in Celebrity Fashion, Part 1!

12 responses to The Week in Celebrity Fashion, Part 2