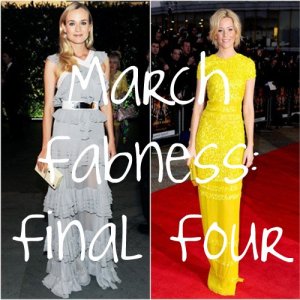 Only four fabulous ladies remain to duke it out for the title of Fabbest of them All.

Diane: Here we go, bitches! The Final Four! The end is in sight, April is approaching, and I’m almost ready to lay down my weapons and be crowned champion.

Elizabeth: Well, it’s not over yet, Diane. You still have to defeat me, and the power of my Hunger Games press tour looks, which are nothing if not fabulous. 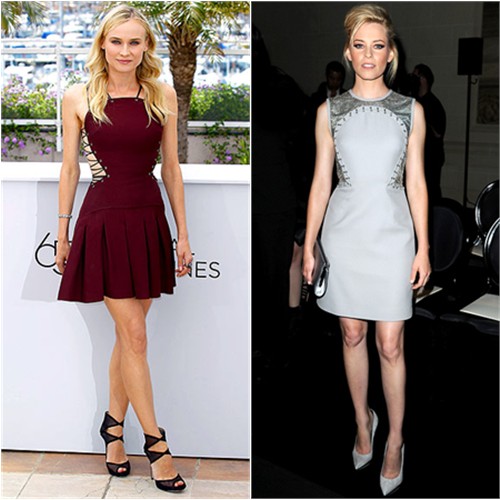 Diane’s dress by Versus, shoes by Jimmy Choo; Elizabeth’s dress and shoes by Versace

Diane: I’d consider us two peas in a pod, with you in Versace and me in their diffusion line. But clearly, I have no fear of side cut-outs, unlike some lame celebrities I might mention.

Elizabeth: I’m not afraid of anything, Diane. Not when it comes to fashion. I will prove this with a series of jaw-droppingly bright and bold dresses. 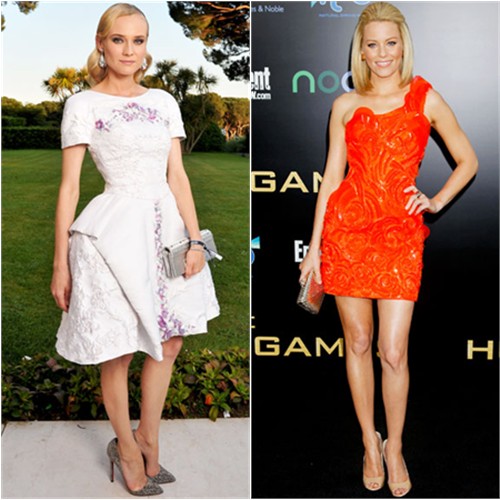 Diane: And I will use this time to prove, time and time again, that I can pull off anything and everything that mere mortals couldn’t even dream of wearing.

Elizabeth: Have we entered some sort of trial where we need to, like, prove things? Or is that just a symptom of the Democracy Diva orchestrating this battle while she’s sitting in a mock trial? 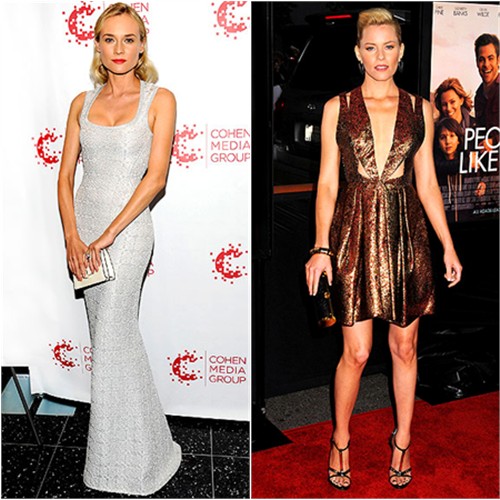 Diane: Yes! The Diva is the judge, the dear readers are the jury, and we’re just really sparkly evidence!

Elizabeth: Seriously? We’re not like, lawyers, or witnesses, or something? We’re EVIDENCE? That seems kind of disempowering. 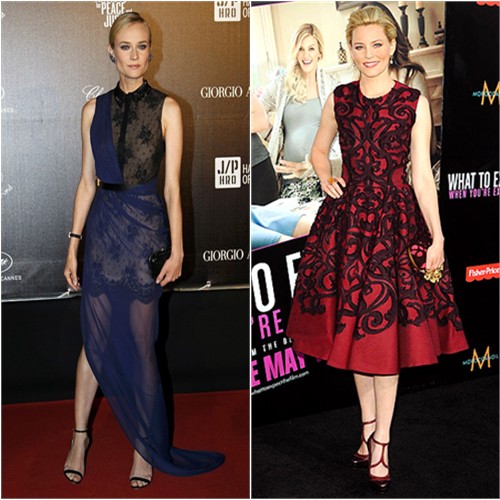 Diane: But we’re really FANCY evidence that looks super pretty and is admissible to prove how fucking glamorous we are! I mean, how glamorous I am. You’re alright, I guess.

Elizabeth: No, moron. We’re the lawyers, and the clothes are the evidence we’re presenting! That way we can be all, Exhibit A: ridiculously fierce brass-knuckled McQueen clutch. BOOM. Lawyered.

Diane: Fine, opposing counsel. I think your latest “exhibit” is tacky and lame.

Elizabeth: Um, excuse me? You don’t talk about fuchsia Marc Jacobs dresses like that. EVER.

Elizabeth: I have no idea what that means. 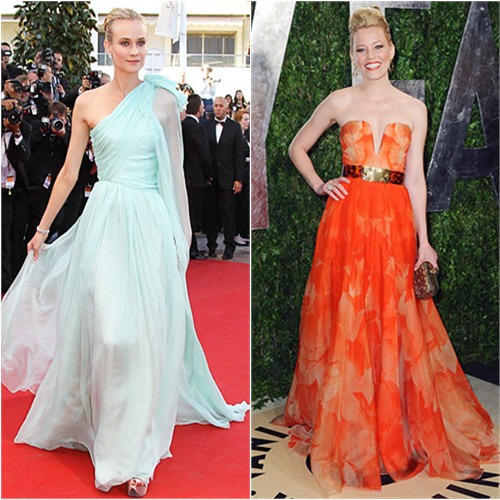 Diane: It means I can float down a red carpet at the Cannes Film Festival like some sort of angel/mermaid hybrid that can pull off this seafoam color with aplomb.

Elizabeth: Aplomb? Get off your high horse, Diane, and just talk like a normal human being, okay? 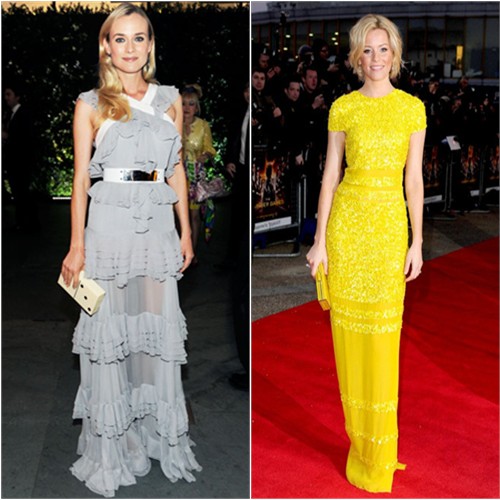 Diane: First of all, I’m not on a high horse. I’m just aware of the fact that by owning a purse shaped like a giant domino, I am cooler than every other woman in Hollywood.

Elizabeth: Oh, yeah? Wear head-to-toe yellow as bright as the sun and then tell me who looks cooler. I mean, how many different black, white, and gray outfits can one woman possibly own? 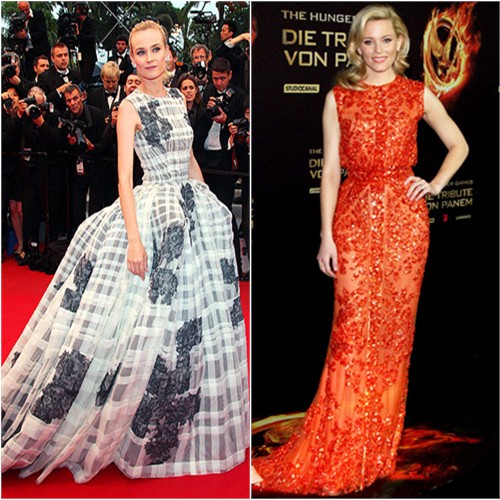 Diane: When it looks as good as this Dior does, you really only need one.

Elizabeth: You can fear color all you like, Diane. My love of bold shades will win me this battle, hands down.

Stone: Alright, Watson. We’ve had this battle before – in fact, last year’s March Fabness culminated in an EMMA VS. EMMA final round smackdown so dangerously fabulous, it wasn’t even safe to hit the red carpet for weeks afterwards.

Watson: Not safe for you, maybe. Because I kicked your ass.

Stone: Yeah, but only because people have this THING about loving Hermione so much that they basically believe you can do no wrong. I mean, that has to be the reason, because your two consecutive victories certainly can’t be based on that hot mess of a dress you’ve got on now.

Watson: Just because you’re terrified of mixed prints doesn’t mean you have to get all bent out of shape about it.

Stone: Um, my dress is watercolor on top of flowers, and yours is black and boring. Who’s afraid of prints now, bitch?

Watson: I’m afraid of contracting conjunctivitis from you based on how pink your eyes are, that’s for sure. 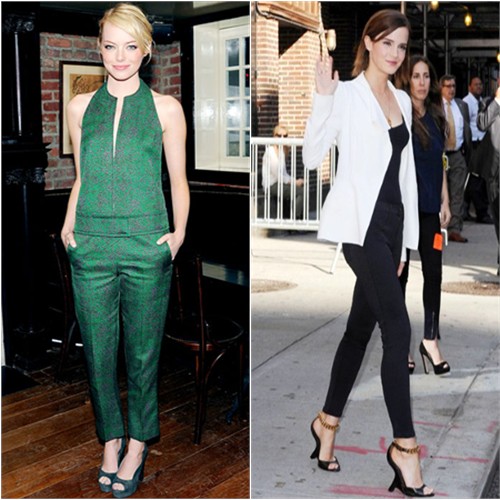 Stone: First of all, pink eye is SO in this season. Second, don’t think that you can beat me in a ladypants battle. Not when my ladypants are green, Calvin Klein, and phenomenally adorable.

Watson: You look like a salamander. Not that I can really describe what those look like, but if I had to guess, they’d quite closely resemble whatever the hell it is you’re wearing now.

Stone: At least I know how to wear a little black dress. Word to the wise, Watson: You’re not supposed to wear them over pants.

Watson: What’s the point of being a little bit hipster if I can’t rock a dress/pants combo once in awhile? 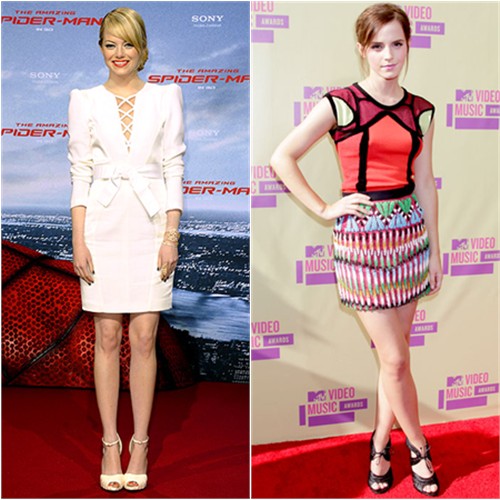 Stone: Can’t you just stick to the classics, like me? I mean, must every dress you wear be this overdesigned and, well, butt-ugly?

Watson: My grandma called – she’d like her shoes back.

Watson: Finally, something we can agree on! I mean, clothes other people have already worn?! I don’t even like wearing things that aren’t custom-made for me!

Stone: Please don’t tell me that hideous thing you’re wearing now was custom-made for you, Watson. Because that was a serious waste of time – you look like a very wealthy mental patient in some futuristic plane of existence.

Watson: That sounds awesome to me. You, on the other hand, look like a cougar trying to reclaim her youth.

Stone: If you think my style is so lame, stop copying me! I INVENTED little white dresses with floral embellishments, bitch.

Watson: That’s not even remotely true.

Stone: I’ve had enough of this obnoxious banter. Let’s let the dear readers kick you out of this competition once and for all.

Watson: In your dreams, Stone.