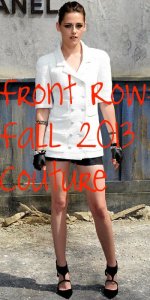 Let’s jet off to Paris and judge some fashionistas!

KRISTEN STEWART at the Chanel show
jacket and shorts by Chanel, shoes by Jean-Michel Cazabat

Suck it, all other celebrities – no one else can make one of Chanel’s classic tweed double-breasted jackets look this badass. I mean, where else can you wear those gloves but the punk-themed Met Gala or the Chanel couture show? The slightly frayed leather shorts are perfect, as are the shoes, and the styling is better than ever.

I continue to believe that Zuhair Murad and Kristen Stewart are a terrible combination. Even the jumpsuits are so fussy, which doesn’t work at all with her I-don’t-give-a-fuck style.

ZACHARY QUINTO at the Atelier Versace show
suit by Versace

Breathtaking. Pace Wu is new on my radar, but I’m quickly falling in love with her. And I want to steal that pink McQueen clutch.

I don’t love the length or the way the ruffles hang over her boobs, but it’s interesting enough and the belt is cool.

ZHANG ZIYI at the Valentino show
dress by Valentino, jewelry by Boucheron, watch by Omega, shoes by Christian Louboutin

This dress looks like it was made for her, but it’s so beautifully simple that I think she could have gone a little further with the accessories. Nothing too distracting, but something at least a little more unexpected would have made this an unstoppable look.

CLÉMENCE POÉSY at the Chanel show
dress and purse by Chanel

EMMA ROBERTS at the Atelier Versace show
dress by Versace

It’s a little severe for me, but then again, that’s Versace. I can’t say I love the shoes -the color combined with the platform make them look kind of cheap, when I’m sure they’re anything but.

ALEXA CHUNG at the Chanel show
dress by Chanel

I love the navy crushed velvet with the lace sleeves, but I think those shoes are all wrong for this dress and maybe hideous in general.

OLIVIA PALERMO at the Valentino show
purse by Valentino

As usual, she’s got a few too many accessories on, but the dress feels perfect for the event.

I love every individual thing she’s wearing (well, maybe not the belt), but I really don’t like any of it together. This is a very common problem with Ms. Palermo.

Eh. For Anna, it’s barely even remarkable, and it looks like a Project Runway reject. I expect more from a woman who wears pineapple fascinators.

This would be fabulous on someone twice her age, but I don’t understand why Milla Jovovich is dressed like she’s going out to brunch with Liza Minnelli.

MILLA JOVOVICH at the Chanel show

We get it. Your pants are gigantic. Can you now put on something that is not an optical illusion?

ROSE BYRNE at the Chanel show
gown by Chanel

I can’t really put my finger on what’s wrong with this, because it’s a perfectly pretty dress, but I find this look exhaustingly dull.

UMA THURMAN at the Atelier Versace show
dress by Versace

Even Leelee’s hipster weirdness is not enough to make this jumpsuit work.

Jennifer Lawrence, I love you so much no matter how fucking stupid your pants are. Even though your crop top looks like papier mache and you have a skirt on one leg, I will always think you are cool. BUT STOP LETTING PEOPLE DRESS YOU LIKE THIS PLEASE.

Seriously? Black pants and a black top? This is PARIS COUTURE FASHION WEEK, for the love of God. Put in some effort.

RIHANNA at the Chanel show
sweater, jewelry, purse, and shoes by Chanel

Rihanna has officially ruined the image of grandpa sweaters forever.

2 responses to Front Row at the Fall 2013 Couture Shows