This episode was, in the great words of Heidi Klum, a snooze-fest. Design an American sportswear look with the great Jackie O as the inspiration. Could’ve been great, except that most of the designers choked and came up with something boring and irrelevant to the challenge. And in response, the judges were so unreasonably mean that the show became uncomfortable to watch. Oh, well. Let’s start the show. 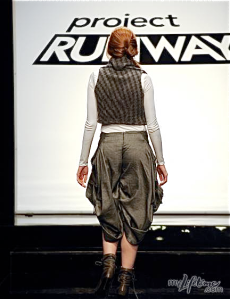 Believe it or not, the worst thing about this look is not the way those pants ride up her ass. It’s that Andy deluded himself into thinking that Jackie Kennedy would actually wear this. The shirt is as nothing as nothing gets, the vest is boring and strangely proportioned, and those pants… Sigh. I might be able to forgive Andy for making a great pair of pants that Jackie would never wear, or an awful pair of pants that Jackie would wear, but this… this is inexcusable. You don’t get to fuck up on the inspiration AND the execution without hearing some truly heartbreaking jibes from Michael Kors. The judges were incredibly harsh this week, but after staring at these pants, I’m not sure I can blame them. But I agree with Nina – as horrible as these pants are, at least Andy is the type of designer who will surprise us. As far as I’m concerned, that’s reason enough for keeping him on the show.

Okay, I get it. Black is a thing. Some designers can get away with entire collections of nothing but black. But April, you’re not there yet. And this is like the eightieth black outfit you’ve made on this show. Step out of your comfort zone and into the world of technicolor, please.

That being said, the dress is cute. I like the two different black fabrics sewn together – it looks expensive and stylish. I can’t really tell what that thing over her shoulder is supposed to be, and I’m not quite sure what about this dress is Jackie O, but I think it’s nice all the same. But I’m still wondering if April can design for any customer except herself.

Gorgeous dress, fugly coat. The dress is soft and elegant, and I love that it’s a little bit Grecian, like Jackie in the Onassis years. But holy hell, it looks like she’s wearing road kill around her shoulders. It’s about as subtle as Lady Gaga’s meat dress. 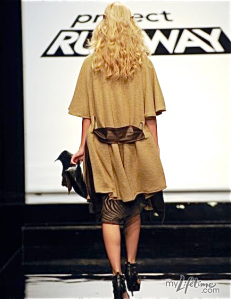 Obviously Jackie Kennedy’s style spanned the decades, but the reason she is an icon is because of her classic 1960s style. That’s why they brought on January Jones, the star and fashion icon of a show set in the early 1960s, as the guest judge. So can someone tell me why Gretchen went hardcore 1970s for every part of this look? The tacky print and the looseness of the skirt, the revealing top, the oversized sweater, and that goddamn camel color she loves so much – it’s screaming disco, which is not what Jackie was about. It just makes me feel like Gretchen really can only do one aesthetic – modern takes on 1970s fashion in butt-ugly colors. I can’t support that style in general, but certainly not in a Jackie O challenge. 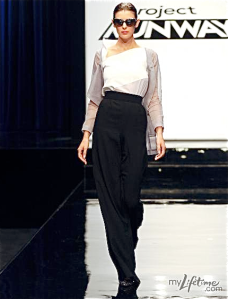 I liked the neckline of the white top, and I felt that overall, this look felt like Jackie O. But it lacks the elegance and glamour that she embodied – it’s like Ivy designed for the poor man’s First Lady instead of the real deal. And I think the back of that jacket is just a mess. But this is the first look Ivy’s designed all season that I didn’t absolutely hate. So, I guess that’s something. 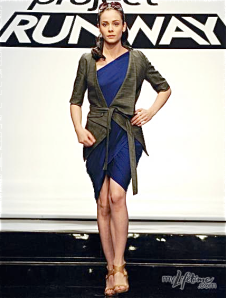 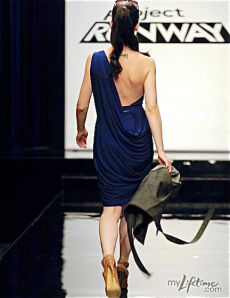 It’s not sportswear. And it’s not Jackie. It’s an evening gown with a denim trench. Michael C has more lives than a cat, but his time is coming, kittens. We’re getting down to the fun part of the season – where all the people on the show actually have talent. And while Michael C and Ivy may have been able to hold their own against AJ and Casanova, they simply lack the talent of designers like Mondo and April. They’ve both shown way more bad looks than good ones, and I’m dreaming of a double elimination in which Michael Kors just vomits all over their designs.

Tom & Lorenzo called this a Monet – cute from afar, but a total mess when you get closer – and I think they’re absolutely right. Everything is reasonably cute, if a little cheap looking, from far away. But look closely – everything is actually kind of a mess. I don’t hate the jacket as much as the judges did, but there’s no excuse for those ill-fitting tank tops. My biggest pet peeve is when designers spend so much time and effort on one part of their look that they completely ignore another part of it. This problem was an epidemic in this challenge – it happened with Andy’s boring white shirt, it happened with Valerie’s black skirt, and it happened here, with those sad, droopy shirts. And while a modern tween might rock that skirt, Jackie Kennedy would not have done so. 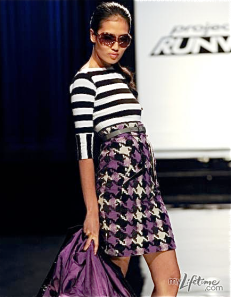 Do I even have to say anything, dear readers? THIS. IS. AMAZING. This is by far my favorite look of the season, and I’m pretty sure it’s in my top 5 best Project Runway designs of all time. The shock of purple as the lining of the coat was simply brilliant – it’s Mondo’s keen eye for detail that takes this look from great to incredible. That top is classic American sportswear in the best sense of the term. It fits so incredibly well, and it was a stroke of genius to take the cuffs of the sleeves and do them in vertical stripes instead of horizontal. And my faithful readers know by now that I’m obsessed with sleeves that hit right at the elbow – Mondo’s picking up on a great trend.

And that skirt. I could write a love sonnet in iambic pentameter about that skirt, but I’ll spare you. The print is stunning and it fits her like a dream. I believe Jackie Kennedy would actually have worn that exact garment, and I can’t say that for any other singular item on this runway. 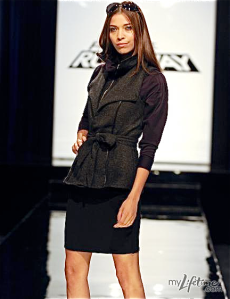 I think the judges were unreasonably hard on Valerie this week. Yes, she was stupid to completely overlook the skirt and make something so basic and boring. But I see nothing wrong with the colors of the vest and jacket that the judges complained about. And did they really get on her case for making a jacket over a jacket when the challenge forced her to make outerwear even when she’d already made the jacket? That’s just unfair. Obviously she didn’t want to do two layers of outerwear, but she had no choice, and I think the vest was a smart idea. It kept her from getting too bulky. And while I agree that the collar is a little sad, I think the vest itself is pretty cute. I don’t know exactly where Jackie O fits into this outfit, but I’m glad we get to keep Valerie around a little longer. I know she’s got more to show us.

Up next on the blog: Your weekly fashion recap, focusing on who wore what to which fashion show! And of course, I’ll be working on the best and worst New York Fashion Week! Get all the updates on twitter @democracydiva!