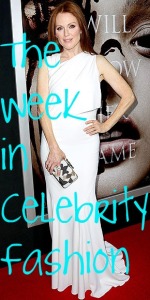 Dear readers, it won’t stop raining in D.C. and the government is STILL shut down. I think we’ve all got just enough pent-up rage for another red carpet recap.

Modern yet classic, and a giant fuck you to anyone who says pale freckly ladies can’t wear white. Go and get it, Ms. Moore. And keep ’em coming.

The trim on the sleeves and collar – what a spectacular detail. It brings the dress from cute but forgettable to totally glamorous. Plus, her hair absolutely glows against the lemon-colored dress.

HAILEE STEINFELD in London
top and skirt by Thakoon Addition

I screamed, “Shut UP!” when I saw this look, because I am actually a drag queen. But no one has made black stockings with black booties look as chic as this in years. The tights keep that super-short miniskirt from being overly revealing, and the crop top with the three-quarter length sleeves fits her like a dream. And that cat eyeliner is like the cherry on top of a fabulous little sundae.

I’m a Rocky Horror fanatic, so I automatically love anything with a giant pair of lips on it. You have to actually be high school-aged to pull this off, but it’s completely delightful on Hailee.

The black, white, and gray floral on this dress is beautiful, but I’m going to have to vote “nay” on those booties. As Nina Garcia would say, “They’re just not aesthetically pleasing.”

Love the dress. The shoes are a little unseasonal, especially without a pedicure (just wear closed-toed shoes if you don’t have time for one before the red carpet!), but the earrings and the lipstick bring the dress to life in an old Hollywood way.

I AM SO READY FOR THE HUNGER GAMES: CATCHING FIRE PRESS TOUR TO START, YOU GUYS. I am ready to see Elizabeth Banks rock every bright color of the rainbow and Jennifer Lawrence decked out like a Mockigjay. Ms. Banks, your fabulous Dolce & Gabbana crop top/skirt combo is just making me more and more upset that I can’t see this fucking movie yet. I’m so excited, I EVEN LIKE YOUR NUDE PUMPS. What is happening to me?!

Haters will hate, but I love the visible bra. I think this is chic as hell.

The houndstooth dress is fantastic, but it needed to be about two inches shorter on her. And I think the accessories only distract from that phenomenal print she’s wearing. A smaller purse was definitely necessary, as were shoes with at least four billion fewer straps.

I want to like this, but it’s just making me crave cotton candy.

Ugh, I hate when half the blogosphere raves over a beautiful woman in another ridiculous Stella McCartney sack. Charlize is flawless, but this is a beach coverup, no matter how many distracting black-and-white accessories she pairs with it.

I support a pop of color more than anyone else, but red was not the right color for those shoes. It does a disservice to that stunning lilac dress.

Oh, sweetie. In a floral and lace gown that’s two sizes too big on you, it is virtually impossible to not look like you’re playing dress-up in your grandmother’s closet. And not in a hipster-fashionable way, just in a little-girl way.

I’m actually surprised by how much I like this. I can’t say I’m not tired of peplums, but at least it’s an interesting shape, and I like the accessories.

I’d love this so much more if it were a size smaller and thereby actually fit her.

It’s not nearly as boring or expected as her usual fair, and yet I still find it kind of depressing and not at all memorable.

SPIDERVEINS. ALL I CAN SEE ARE SPIDERVEINS. I really love the crimson velvet fabric, but God, do I hate everything else about this gown.

I don’t know who amongst your team is too afraid to tell you this, Emma, but I am not: Those roots are unacceptable. Especially if you’re parting your hair like that. Find a different hair style, touch up the roots, dye the rest of your hair purple, whatever – but you can’t not look like an extra on Jersey Shore  with that current hair. And come to think of it, there’s something Jerseylicious about that triangle thing between your boobs. I don’t mind the cut-out, but that silver triangle cheapens the look. Oh, and we’re done with white pumps on the red carpet. It’s mid-October, it’s raining and cold, and there’s no fucking government. Winter is coming, dear readers. And winter is no time for white pumps.

I honestly cannot look at those shoes without cringing. I have to move onto the next terrible look before my shoulders lock into this position.

No. Hell no. I reject everything about this. Diva out.

One response to The Week in Celebrity Fashion, Part 2