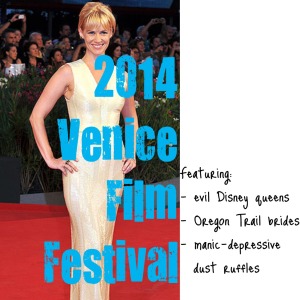 Let’s finish up this fabulous film festival, so we can move right along to the next one! (Seriously, the film-fest-scheduling gods must hate fashion bloggers. The Venice, Toronto, and Deauville festivals all overlap – and during New York Fashion Week. I swear, they’re trying to destroy me.)

Easy-breezy hair, laid-back makeup, and a lemony-metallic liquid gold gown, perfectly tailored to art deco fabness? YES, PLEASE. This is what the Venice Film Festival is all about – mixing gowns that cost more than the GDP of a third-world country with that “I don’t give a fuck, I’m in ITALY, BITCHES!” vibe.

I have a pretty serious fashion crush on Israeli actress Moran Atias. She is impossibly glam, with preternaturally shiny hair and a penchant for classic, delicate gowns. I think the silhouette of this polka-dotted gown is just fantastic on her. Plus, I bet she makes her personal assistant carry a wind machine at all times, so her hair can be blowing in the breeze like that whenever she feels like it.

Exquisitely glam, and I hate most nude gowns, But this is the perfect color – peachy with a little bit of sheen – and it makes her look about six thousand feet tall. I absolutely adore the styling, especially that statement ring.

I want to be best friends with those sleeves. Is that weird? No, don’t answer that, I know it’s weird, and I don’t fucking care. They’re awesome. Those sleeves and I will go shopping together and talk shit about everyone we know over brunch, and you all can fucking deal with it. Also, someone please hire this French beauty to be in some American films, so I can get more of her gorgeousness on the red carpet. She’s got that innate cool factor that French women seem to possess in multitudes.

The pinstripes are amazing, as is the one-shoulder strap. Pairing a glimpse of rightie side-boob with that leftie under-boob cut-out can be quite dangerous, but she somehow makes it look fabulous instead of like her dress is disintegrating on the red carpet. The blue fabric poking out from the silver band around her waist is a little sloppy, but as a whole, it’s a really interesting, surprising look.

Beautiful. I love the way the print sort of shrinks and gathers in the waist – it’s incredibly flattering. And the neckline is to die for.

A sweet and chic dress, though I’m getting sick of those Bionda Castana shoes. They just have one too many details – you get those triangle shapes OR the ankle ties OR the peep-toe OR the platforms, not all of them at once. And she could have used a simple necklace or some low-key earrings just to make her look a little less bare.

Those sleeves stop at such a strange place on her arm. Not quite short sleeves, not quite sleeveless, this is the no-woman’s-land of shoulder-arm area, and it makes the silhouette just a little bit awkward. Also, I’m not sure this orange-y shade of red is really her color.

Terrible hair; worse dress. This looks like a Project Runway challenge where the designers had to make a wedding dress out of couch cushions.

It’s been quite a summer for maternity wear, since baby bumps have been the season’s most ubiquitous trend. Milla debuted her fabulous fetus in this chic all-black NYC-socialite-does-after-dinner-drinks ensemble. I approve.

I love the watercolor colorblocking (watercolorblocking? is that a thing?) and the stunning shades of purple in this dress. It could fit a little better, and the cranberry purse seems a bit out of place, but I’m pretty impressed with this look regardless.

This outfit definitely only works if you’re Uma Thurman. Is that a bra with curtains hanging over it? It’s bizarre. But the matching ruby nails and diamond-and-ruby jewels bring the look together, especially with those colors reflected in the shoes.

The top of this purple sheer dream of a gown is an absolute delight, but things get a little wonky around the waist and are kind of a mess around the hem. I think the lining is wrinkled underneath the dress, which kind of ruins the whole point of that beautiful sheer embroidery. And the shoes just aren’t right for that delicate, gauzy skirt. The color is perfect on her, though. I’ll give her that much.

She looks like an evil Disney queen, but not in a good way. Like in an off-brand creepy lady scaring children in Times Square sort of way.

Is she wearing that skirt sideways? Because that is just such an unreasonable slit. In fact, everything from the sort-of-but-not-really halter straps to that cut-out seems to be falling in the wrong place on her body. Sorry, Charlotte, but even if you start with a great gown, it’s not going to work well if you get dressed in the dark.

Please, lord, let me never see another cut-out like this one. Also, these shoes are too delightful to have to appear next to such an awkward, oddly-fitted dress.

I was almost on board with this look, until I got to the bottom. That dingy, dirty skirt looks like a manic-depressive dust ruffle.

It’s hard for a 5’2″ lady to look statuesque, but this dress is actively working against Zoe’s petiteness. The proportions make her look stumpy – it needs to be pulled up just a bit, shortened by a lot, and that weirdly thick peplum needs to fall in a different place or just be nixed entirely.

I hope you have a lovely Oregon trail wedding, Constance! Don’t get dysentery.