What did your favorite and least favorite celebs wear to ring in the new year? A whole lot of trash, from the looks of it! Let’s dive into this hot mess and start ripping some skinny bitches apart.

Rihanna at Pure in Las Vegas

We expect Rihanna to make certain purposeful fashion faux-pas. She does it for the attention, and it works – I’m writing about her, aren’t I? (And isn’t my personal attention all that these starlets really seek?) So, if this dress were on a normal woman, I’d be obsessing over how her hair matches the shade of the dress – and I think her manicure, as well, which is just unnecessary. But all that is intentionally fugly. What I’m not sure is intentionally fugly is the alien shape her boobs have taken on because of this hot disaster of a dress. She looks like she’s wearing red CENSORED bars all over her, and even though she’s nearly covered in fabric from head to toe, this dress is still Skanksville all the way.

Project Runway alum Christian Siriano tweeted this pic of Willow “Whip My Hair” Smith in one of his gowns at a photo shoot. And I think she looks just as stupid in a couture ballgown as she did in this cracked-out getup at the American Music Awards. Don’t get me wrong, I love whipping my hair as much as the next girl (anyone who attended the New Years party I went to can provide photographic evidence of this fact), but could Willow Smith maybe not dress like a tweenage crack baby? Please?

Now, Kim actually has the right idea for here, at least for New Years’ Eve in Las Vegas. You should be wearing something tight, white, shiny, and boobalicious. What concerns me is the Botox she clearly had done in preparation for this event, because she looks like a complete fucking alien from the boobs up. That frozen face is Megan Fox-level creepiness. There is just no way God intended human skin to look like that, Kim. Give up.

And I know it’s New Years in Vegas, but unless you’re performing with Cher tonight, I think you can pull the bust up just a bit.

And now for something unrelated to fashion or New Years – just a beautiful picture of a happy new family! This is the first official photo of the incomparably talented Neil Patrick Harris and his husband David Burtka with their newborn twins, named Harper Grace and Gideon Scott. David and Neil look so beautifully in love, and their babies are precious.

Naomi Watts at a wedding in Australia

I rarely write about Naomi Watts, because she’s really boring, but I saw this dress that she wore to her friend’s wedding in Australia and kind of fell in love. There’s a lot of things I’d tweak – the accessories, while awesome, don’t go with this dress at all, and the three rosettes on her chest are a little much, but just the idea of a soft, ivory lace dress at a summer wedding is so romantic and lovely. Most importantly, she can wear it again!

Jennifer Lopez in Herve Leger at LOVE in Las Vegas

J.Lo is apparently suffering from the same problem as Kim Kardashian. She’s appropriately decked out in shiny, tight glory for New Years in Vegas, but her face looks like she got a bad eyelift that morning and they had to cover it up with twenty pounds of airbrushing. She just looks ever-so-slightly like she got bludgeoned in the face outside the hotel, no?

Chloe Sevigny at the Mondrian Hotel in Miami

Oh, Chloe. I try to be on your side, because you are truly a force to be reckoned with on Big Love, but I’m pretty sure your appeal stops there. Your hair is always a bit crazy, but now we’re entering escaped mental patient territory. Seriously, that ‘do is unacceptable. And this dress is a total disaster AND has none of the fun, tight, shiny, fabulous, glamorous qualities that a New Years dress should have. Oh, and now we’re doing no makeup except for red lipstick? Oh, yeah. That looks excellent in photographs. Dumbass.

Kourtney Kardashian in Bodyamr at the Mondrian Hotel in Miami

Kourtney Kardashian is definitely the sexiest woman at the 1991 Grammys. But, since it’s New Years’ Eve 2011, she looks like a complete fucking idiot.That color? The hot mess draping at the bottom? The fit is disastrous; it’s like a car accident I can’t stop staring at, if that car had no reason to be on the red carpet in the first place.

Emmy Rossum in Bottega Veneta at The Cosmopolitan in Las Vegas

Now, Emmy Rossum looks fresh, youthful, adorable, and BORING! While other starlets went too far down one extreme, Emmy went too far the other way. Honey, you could rock this dress at any press conference, daytime event, even strolling down the street, and it would look totally precious. But it’s New Years! Can’t you live a little? Unleash your inner drag queen (we all have one, mine is named Sasha Foxwood and the song she struts on stage to is “LoveFool” by The Cardigans) and throw on a little glitter!

Kristin Davis in Prada at The Cosmopolitan in Las Vegas

But this might be a perfect New Years dress for a beautiful actress in her 40s, like Ms. Davis. A bold, sassy color, to remind you that it’s still festive, but nothing too glitzy, because that would make her look like she’s trying to dress half her age. Great shoes, a nice fit (though perhaps a bit too long), and the hair and makeup are boring but beautiful.

Rashida Jones in Farah Khan at The Cosmopolitan in Las Vegas

Whitney Port at The Cosmopolitan in Las Vegas

Once again, this dress would be a total knock-out at a high school prom in Los Angeles in 1986. But, honey, snap back into this millennium, please. That dress had MISTAKE written all over it. The color, the shine, the rouching, the shoulders – and then you added that horrible necklace and those completely anachronistic shoes. This photo is giving me a stress migraine. 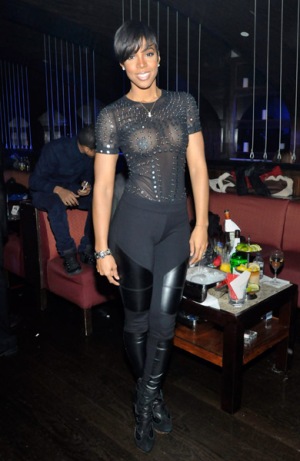 Kelly Rowland at the Mirage Hotel in Las Vegas

In Kelly’s defense, I bet if the camera flash weren’t on, you wouldn’t be able to see her nipples quite so glaringly. And then this would be, if not a cute outfit, then totally something appropriate for an ex-member of Destiny’s Child to wear on New Years in Vegas. Unfortunately, I can see way more than I want to, but otherwise, this crazy get-up is sort of okay giving the parameters of the event.

Hate the shirt, hate the purse, but those shoes do look delicious.

Check back tomorrow for the People’s Choice Awards Red Carpet!

One response to The Week in Celebrity Fashion: New Years Edition