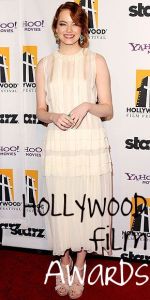 As Hollywood’s hottest stars pat themselves on the backs for being just so fabulous, let’s knock them down a peg with our judgmental bitchery.

Things I like: The earrings, the concept of the dress, and the concept of the hair. Things I dislike: the length and proportions of the dress, which are a little weird; the execution of the hair, which is far from perfect; and the pairing of those shoes with this dress. She still looks great, but more because she’s Emma Stone and less because she’s actually dressed well.

Remember when you couldn’t swing a stick on a red carpet without knocking over Carey Mulligan? I haven’t seen her in months. She looks beautiful, but boring as boring gets. She’s usually a bit of a wardrobe risk-taker, but even the interesting halter top can’t save a basic LBD and all-black accessories from being a snoozefest. Also, I get that pixie cuts are a thing, but this particular pixie cut actually makes her look like a 12-year-old boy.

Love the dress, but she’s worn a thousand other dresses just like this one. And she didn’t put any effort into the styling whatsoever – she depended on the dress’s print to do the work for her. But the dress really is pretty and it fits her like a dream.

The longer Rosie sticks around, the more I can see that her early red carpet success may have been beginner’s luck. She almost always chooses a killer dress, but she doesn’t really seem to know where to go from there. Basic black pumps and sloppy hair can easily kill a good look, especially here, where the dress she’s starting with is cool, but not necessarily pretty. That’s a whole lot of print happening, and I’m just not sure it’s working.

I’m getting a wee bit tired of sheer black skirts on gowns, but it’s a trend that won’t die, so I guess I should just deal with it. But the embellishments on the bodice look incredibly cheap, and she’s in desperate need of jewelry.

Honey needs to admit defeat and choose a darker hair color, because she’s starting to look like Heidi Montag with those painfully fake platinum locks. And the fit on this dress is such a nightmare that I’m convinced everyone who dresses Amber HATES her. Why else would they let her leave the house in this aqua potato sack? It’s a shame, because the color of the skirt is beautiful and unusual, but this droopy, saggy blouse and the too-long skirt are killing me.

No. I don’t care if you’re three, thirteen, or thirty – THAT HAIR IS NEVER OKAY.

Draco Malfoy, you are just the fiercest. Can you start tutoring your fellow male starlets on how to dress? Because you seem to be one of the only men who looks both unique and fashionable on a consistent basis, you dashing wizard.