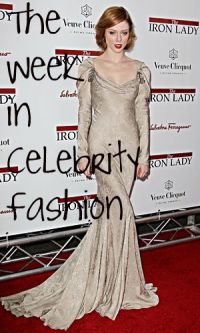 Let’s do this, dear readers.

Supermodel Coco Rocha is Zac Posen’s muse and one of the fiercest bitches on the planet. Though I prefer her in color, she was basically born to wear exquisite Posen gowns like this one. Bitch knows how to bring the drama.

This was my Spring 2012 red carpet prediction for Hailee Steinfeld, who I still think would have been a total dream in this gown. But it’s obviously working wonders on Coco as well, because there’s really not a Zac Posen gown this bitch won’t look amazing in. Love the color and the fit; the silhouette makes her look about a thousand feet tall; and the simple styling keeps things clean and chic.

It ain’t easy to wear a purple lace dress with pink flowers all over it, but holy SHIT do I somehow love this gown. Rose was smart to barely style it, as a dress this attention-grabbing doesn’t need much in the way of accessories. It fits her beautifully, and things that usually bother me (trains, seams that cut across the waist) are somehow diminished here.

Love the hair, but the natural-colored makeup with a nude-ivory dress leaves her looking totally washed out. The dress itself is cute, but – and I find myself saying this way too often – would wearing this in a color kill you, darling? And even though those shoes make her ankles look like they point the wrong way (seriously, doesn’t her right foot look seriously deformed?), they’re fabulous as hell.

See how much better she looks in an actual color? She just doesn’t have the skin tone for those washed-out, pale nude sad girl colors. The makeup is still a little disappointing, and I think those shoes are kind of fugly, but Charlize stuns in red, so I can’t complain too much. (Except I totally can. And totally will.)

Jesus Christ. These HIDEOUS Stella McCartney dresses are everywhere. We’ve seen this stupid fucking swirl cut-out pattern and hem on Kate Hudson, Gwyneth Paltrow, Chloë Moretz, and Nicole Kidman – all in the last month. I swear, if I have to see these stupid swirls on the red carpet every single week, I’m going to lose my mind. Also, the shoes are disgusting. Like, five-dollar-hooker-outside-the-Port-Authority disgusting.

I’ll never understand why stars decide to wear two half-dresses instead of one whole one, but you can’t deny that Kylie looks awesome in this hybrid gown. I don’t personally love it – I think the red bodice is kind of tasteless, and the gown is way too long – but it sure as hell works on her.

Honey, you can dye the pink our of your hair and don all the pussy bows and First Lady dresses you want – we’re never going to forget that you’re the girl who shoots whipped cream out of her tits in her music videos.

First, the stick-straight hair: Ladies, it is not 2001. This fried-beyond-repair hair is not trendy, nor should it be. Especially on a woman like Sandra, who’s got severe features to begin with, it’s just such an unnecessarily harsh look. Softer, more natural hair looks better on basically everyone. Second, the suit. A silky-satin suit with shoulderpads sounds like a bad idea in theory . . . BECAUSE IT’S A BAD IDEA. I can totally love a chick in a fierce suit, but oof, is this a nightmare on Sandra. You clearly can’t wear this for longer than the length of a runway without wrinkling it, and the wrinkles take all the beauty and chicness away from the suit. Try again next time, Sandy.

I don’t care how old you are – a short black skirt, a white Peter Pan collared blouse, and black knee-high stockings? Unless you’re in the confines of your prep school, you absolutely cannot wear all of those schoolgirl trends at once. She’s still adorable, because she’s Elle Fanning, but honey needs to give up those awful little collars. They’re not working on her, or on anyone else, for that matter.

Just once, I’d love to see her in a dress that fits. There’s no reason she should constantly be running around in dresses two sizes too small, that squeeze her tummy and make her look so much wider than she really is. I don’t hate the dress, but the fit ruins it, and the hair is just stupid. Love the shoes, though!

Well, you can’t go wrong with red lace Valentino and black accessories, can you? It’s a tried-and-true formula, and Claire is working the shit out of it.

I’ve been looking at this picture for days, trying to decide if I love or hate this gown on her. I think it’s the hair and the fur stole that are throwing me for a loop. This is a whole lot of dress, and a dress this busy really doesn’t need a fur wrap or hair that looks like it’s made of plastic. The gown itself is absolutely stunning, but it doesn’t fit her perfectly. And Rachel loves to style things just a bit too much – that’s a flaw that can sometimes ruin even the best of dresses.

I am morally opposed to jumpsuits, and even more opposed to flood pants jumpsuits. But if you’re going to wear one, this is the one to wear. She looks as great as one can look while wearing something this stupid, because the color and shimmer is totally excellent on her, and the black shiny accessories are simple but dramatic. The hair and makeup age her by about ten years, but maybe she was just up late with the baby last night, so I’ll forgive it.

KATE MARA at the New York City premiere of The Girl with the Dragon Tattoo // dress by Christian Dior, purse by Miu Miu, shoes by Brian Atwood

American Horror Story star Kate Mara, big sister to Rooney Mara (the titular Girl with the Dragon Tattoo), is one of the cutest little things on the planet. Though I hate the generally frilly, frou-frou-ness of this dress, I think the color is exceptional on her and those dark metallic accessories were excellent and surprising choices. The hair and makeup are perfect as well, so props must be given to her stylist for making a head-to-toe success out of an only so-so dress.

Dear hipster-starlets (yes, Chloe Sevigny and Alexa Chung, I’m talking to you too): YOU ARE NOT TOO COOL FOR MAKEUP AND HAIR STYLES. Nothing about you is so interesting or hip that you’re allowed to forgo basic necessities like, I don’t know, mascara and a blow dryer. It’s particularly offensive when you’re wearing a multi-thousand-dollar outfit – like, seriously? People send you thousands of dollars worth of clothes – or you actually SPEND your semi-hard-earned money on them – and you can’t be bothered to BRUSH YOUR FUCKING HAIR? Expect me to irrationally hate you all until you start realizing that you are NOT better than everyone else on the planet, that you are subject to the same annoying fashion rules as the rest of Hollywood, and that your ugly fucking hair does not make you cool – it just makes you look like shit.

JENNIFER LOPEZ in Los Angeles // coat by The Row, pants by Milly, shoes by Charlotte Olympia

Jennifer Lopez is one of the many, many stars that I just cannot stand the sight of, so when I admit that she looks good, you know it’s serious. But that coat is eight different kinds of fantastic, the pants work really well on her, and the dramatic statement accessories are all kinds of excellent. She’s got a knack for looking over-the-top whenever she leaves the house, but this is that excellent balance between being a total diva and being normal enough to not wear diamonds that cost more than most people’s houses when you’re just running errands.

Is she kidding with that neck bow? I mean, sure, it makes for some adorable baby pictures when little girls rip the bows off of presents and put them in their hair or on their clothes, but I think once you hit puberty, that kind of behavior is just embarrassing. And no matter what Christmas ornament you’re wearing around your neck, it won’t distract me from the fact that you’re wearing a boring blouse and a boring skirt in proportions that don’t quite work for you at all.

Love the nerd glasses, but if you’re going to work them on the red carpet, you should do hair down so you don’t look too much like a librarian. I wish she’d lost the blazer (again, it’s very secretarial with the hair/glasses), but the dress itself is adorable and the shoes are fierce. Slowly but surely, she’s learning. I’m all about funny ladies who can dress, so I’m hoping Rashida continues her upward climb from fugly to fabulous fashion.

It’s bad enough that she’s wearing Felix the Cat on her vagina, which makes the pussy jokes just too easy. Add that to the giant Christmas bow over her tits, and you’ve got an automatic contender for worst dressed of the millennium. But, though you may not even be able to comprehend this, it actually gets worse:

That’s correct. When Fergie realized she could only zip her dress halfway, did she take it off and wear one of the eight thousand other hideous cocktail dresses in closet? No. She shoved some black fabric back there, left the dress half-zipped, and hit the red carpet. That is an unforgivable sin, dear readers. Tough as I am on celebrities, I’ll usually forgive their transgressions once they wear something awesome again. But this? This disturbs me on every level, that a woman alive would leave the house in a half-zipped dress, particularly a woman who employs a team of people to style her and can afford any dress on the planet.