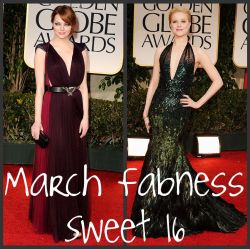 The polls on this round have now closed, but tune in later today for Round 4! 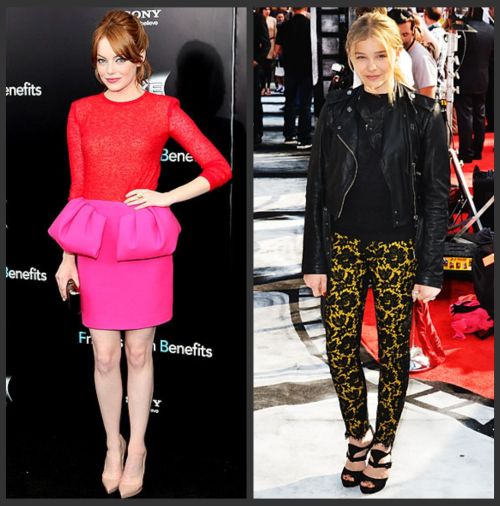 Chloë: I’m fifteen and I can rock yellow-and-black lace leggings. Beat that.

Emma: Aw, ain’t you just the cutest! Acting-wise, I might have been totally overshadowed by my ridiculously epic The Help costars during awards season, but no one can compete with my wardrobe.

Chloë: At your old age, it’s a wonder you survived the exhaustion of awards season? 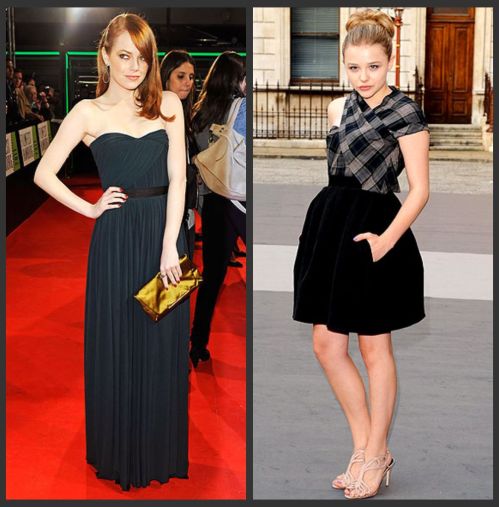 Emma: Old age?! I’m twenty-three! You are an infant, and your duckface is really fucking annoying. 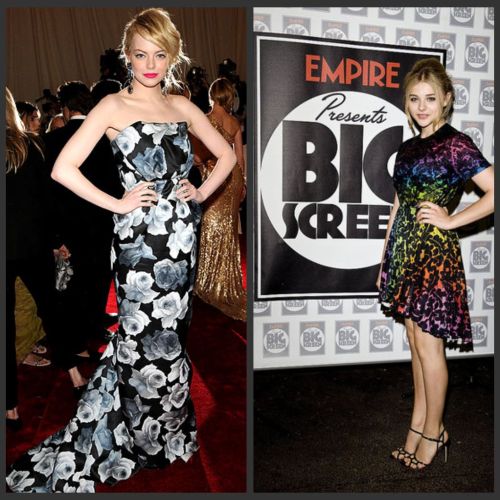 Emma: Look, this is me doing an impression of your pout! See how silly you look, little girl?

Chloë: Who cleaned up Lindsay Lohan and put her in such a nice dress?

Emma: That was below the belt, kid. Any Lohan comparison is unnecessary. And besides, I’m actually a natural blonde, not a ginger!

Chloë: You might be a natural blonde, but that coked-out platinum color you chose was not going to work for you. 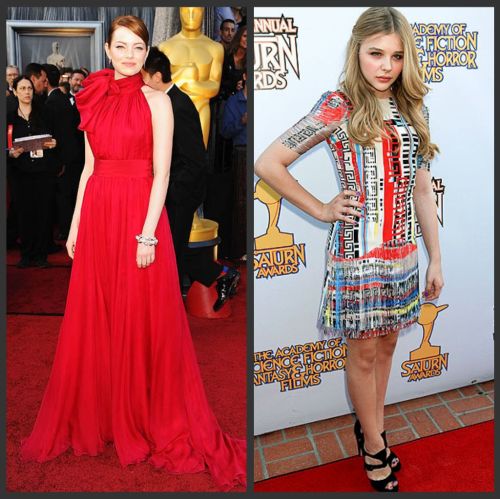 Emma: FINE. Get out of my way while I rule the red carpet.

Chloë: Not without one last pout. I mean, um, pose. I don’t pout. I swear.

Taylor: Howdy, world! I am 15-year-old country star who is totally virginal, y’all! That’s what I’m supposed to say, right? Is it time for my fake surprised face yet?

Lea: I’m Lea Michele, but you probably know me better from the fact that my sternum is exposed and my skirt is short enough that I don’t have to change outfits before my gyno appontment!

Taylor: I have an excuse for short skirts, which I deploy strategically and rarely – I’m fucking 5’11! This hemline is where things fall on me! You’re 5’2, you probably cut that slit higher than it already was to flash some tiny thigh on purpose.

Lea: Wait, are you not supposed to tailor your garments so that they nearly expose your genitalia?

Taylor: Whatever, lady. Just try and compete with my old Hollywood glamour.

Lea: This flapper dress weighs more than I do. It could take you down in a fight if it comes to that, Swifty.

Taylor: Let’s just agree to agree that I am a pretty, pretty princess.

Lea: Snooze. How will people know you’re a celebrity if you don’t make sure every gown shows off your thighs?

Lea: Fine, but if I can’t have a vag-high slit, I need to show my sternum. Otherwise I might spontaneously combust.

Taylor: Shut up and let me focus my bedroom eyes on the cameras.

Lea: What? I can’t hear you over the gasps in the crowd as the wind blows and exposes my hoo-ha.

Taylor: Give it up, Lea. You know deep down you want to steal this epic gown from me.

Lea: Keep your lace and frills – I’ll do just fine in red. 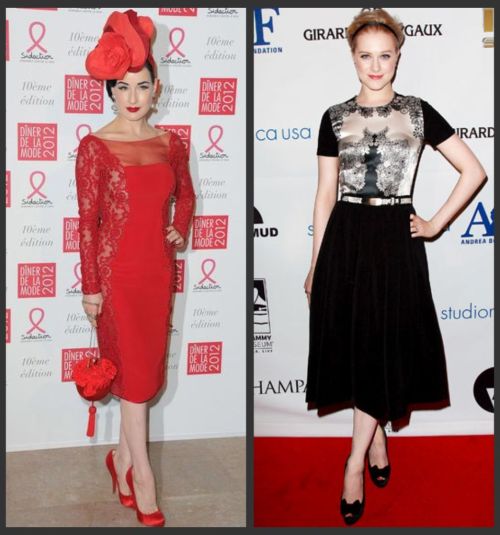 Dita: Well, this is awkward. Let’s just say it – we’ve both had sex with Marilyn Manson. And no matter how vintage and demure we look… that will never stop being true.

Evan: Truth. Although I had the good sense to end things before the wedding actually happened. Love your purse, by the way.

Dita: Oh, aren’t you darling. Perhaps we can be allies in vintage Hollywood glamour? Shotgun 1940s!

Evan: It’s all yours, dear. I’m thrilled to be in the 1920s with my fringed flapper dress and fingercurled bob.

Dita: Well, that was fun. But let’s just focus on the real stars of this round: my tits.

Evan: They are… there, all right. But look how handy these pockets are, for pulling my dress apart to flash some thigh to the cameras!

Dita: Do you really think you can compete with my blue sequined gown?

Evan: I won’t dignify that with a response. I will simply flash some more thigh through my sheer skirt. 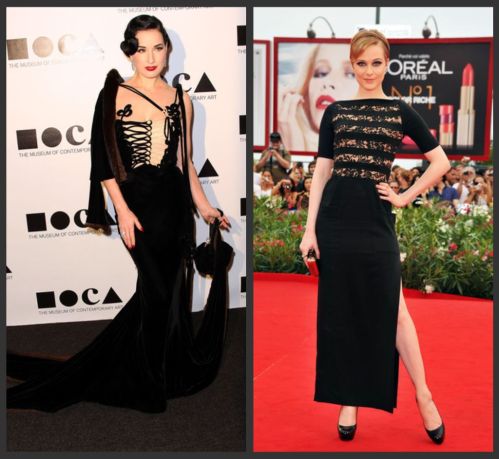 Dita: Let’s battle in our most dramatic black gowns, then, and see who’s the victor. 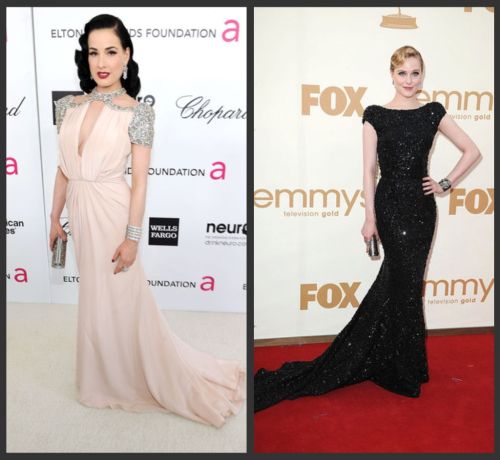 Dita: Well, this gown has everything: Diamonds, drama, some inner side boob – what more could a girl want?

Dita: It’s been lovely knowing you, Evan. But I’m shutting this thing down with black velvet and pink cascading florals.

Evan: Three words: Green. Ombre. Feathers. And like a drag queen does with her wig at the end of the show, I am PULLING. IT. OFF.

Rosie: Here’s my story: I’m a Victoria’s Secret model-turned-Transformers-star, and I get to sleep with Jason Statham. 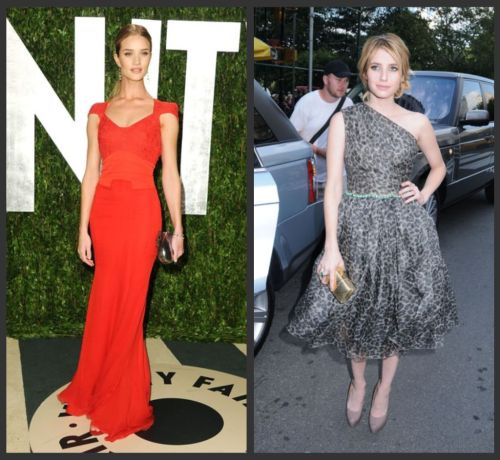 Rosie: Yes, fine, you’re adorable. But that can’t quite compete with my dramatic red gown, can it? 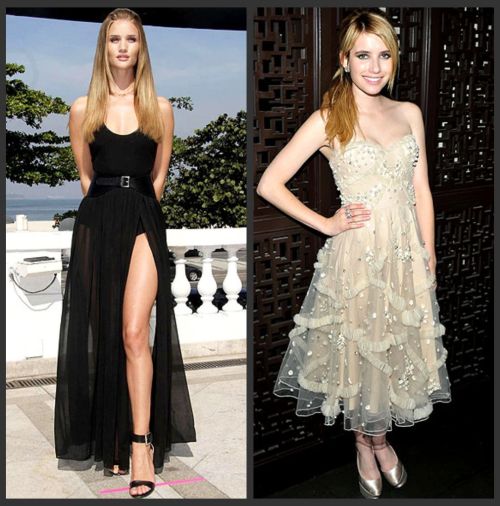 Rosie: Fine. See if you can deal with my sheer-skirt-over-a-leotard.

Emma: Um, I can’t. I’d rather dress like a wedding cake. 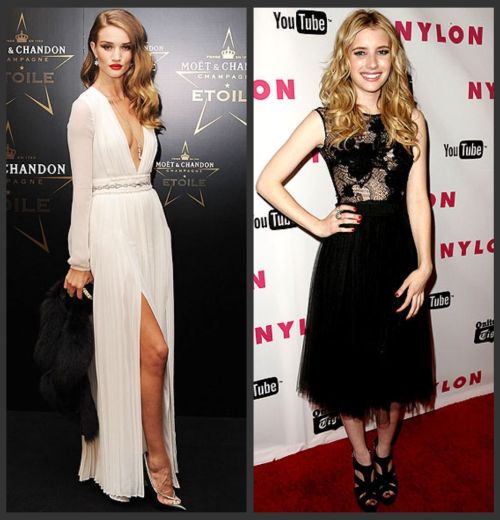 Rosie: Oh, you’re still here? Fine. Here’s the double-whammy of a high slit and a plunging neckline! Deal with my sex appeal!

Rosie: Adorable’s the problem, isn’t it? Look at how sparkly my red gown is. 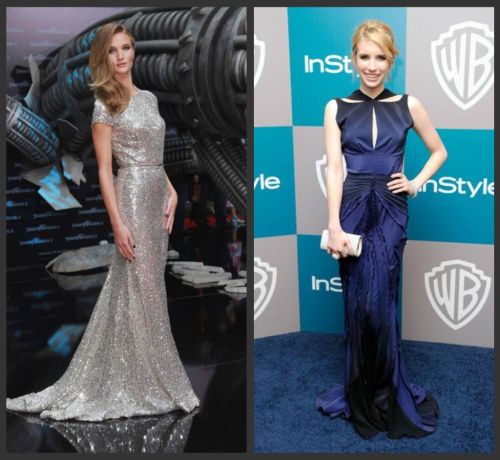 Rosie: Oh, you’re about to get SCHOOLED in sparklyness.

Emma: Bring it! I’ve got trendy cut-outs to defend me! 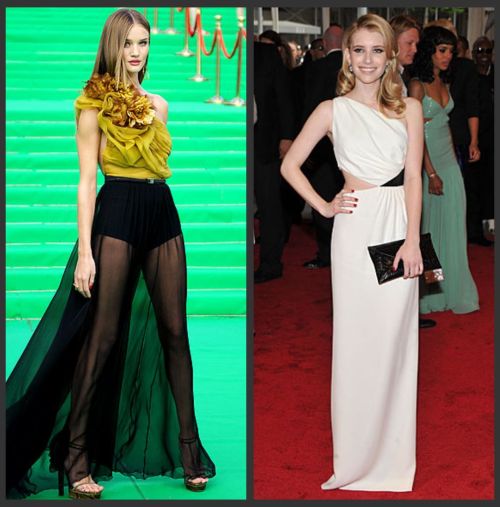 Rosie: Well, if my gorgeous Gucci gown can’t cinch this thing, nothing can.

Emma: Never underestimate the power of a teensy waist, a well-placed cut-out, and Julia Roberts’s smile.