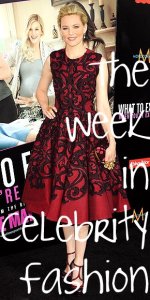 Believe it or not, there is a world outside the Cannes Film Festival, and it’s chock full of starlets to judge.

Ms. Banks, you’ve done it again. This time, the supremely well-dressed actress is in gorgeous blood red McQueen. I can’t even handle how beautiful the matching purse is – it mimics the pattern on the dress so perfectly, it almost makes the clutch seem invisible. The color and fit are fantastic, and the look is fresh and bold. And let’s applaud the shoes:

Delicious. Every week I think Elizabeth Banks can’t get any better, and she continues to prove me wrong.

Welcome to adulthood, Taylor! We’re thrilled to finally have you. I’m not all about the stick-straight blowout, but the blunt bangs and lack of princessy curls make her look a little more sophisticated. A girl with such bedroom eyes really doesn’t need this much smoky eye makeup – in fact, it actually obscures her lovely eyes, which is a shame. But that dress is downright sexy, a word I never thought I’d use to describe Taylor Swift. It’s still a fairly simple, feminine silhouette in a very basic red carpet color, but that bodice is just fantastic. She’s insanely tall and has the teensiest waist – it’s about damn time she started showing it off.

She looks so much like a cupcake that I’m getting diabetes just looking at this picture, but I can’t deny that she looks fucking adorable, and this is clearly the outfit she has forever dreamed of wearing. I mean, most of us outgrow this kind of thing by age 15, but if you’re going to go girly, Oscar girly is the way to go. The layers and colors of that skirt really are beautiful, it fits her like a dream, and that purse is definitely worthy of a close-up:

Come on. It might be saccharine, but even if it’s too sweet for your tastes, that’s the cutest darn purse I’ve ever seen!

MILLA JOVOVICH in Vienna // gown and purse by Atelier Versace, shoes by Gucci

It’s certainly a love-it-or-hate-it kind of thing, but fuck it, I’ll stand by drunkface Milla’s decision to wear this crazy awesome gown. The hair is, as usual, awful, but her gorgeous eyes and the neon green dress look perfect with that delicious coral lip color. The subtle but funky gold accessories are fantastic, making her look like a futuristic disco dancer. And, at least conceptually, the gown is incredible, with the side cut-out and the heightened shoulder and the mega-high slit. It’s not perfect on her, but this much of a red carpet risk is worthy of some positive attention.

We’ve got a lot of K.Stew looks to cover, so let’s give this a quick head-to-toe rundown. Hair is kind of sexy and much better than usual; makeup is slightly heavy but also shows significant improvement. She’s SMILING, which is a first, and she can work that boyish crop top fairly well. I’m not sure what’s going on with those pockets or pleats, but other than that, these pants are adorable on her, if a little funny in the crotch. But I love the cuff and how well they flatter her tiny waist. And obviously, the shoes were a stroke of genius. Is it just me, or . . . is K.Stew starting to look kind of decent?

This dress is gorgeous on her – I love the belt, the blue lace over orange fabric, the fit, and most of all, the pockets. But I can’t support those shiny blue pumps. They are such an eyesore, I feel a migraine coming on, I swear.

The braid is so last summer, she looks miserable, and though the dress is cute, she’s bringing absolutely nothing to it.

Oof. Awful hair, awkward pose, and a terribly fit dress? That length doesn’t work on her, and it’s clearly a size too small. The belt is gorgeous, but it’s not nearly enough to save this look.

I have to say, it’s a terrific outfit for a casual summer event. Most women can’t pull off such a shapeless dress, but it’s kind of adorable on her petite figure, especially with those fun shoes.

What evil bridezilla made you wear this hideous, bib-adorned, frilly babydoll bridesmaids dress? And did you even try to talk her out of the satin shoes? Come on, Rachel. I don’t care if it’s Chanel – you can do much better than this.

The fit’s a little funny in the bodice, but the dress itself is quite chic and much more interesting than most of Posh’s designs. I actually like the nude peep-toes, because they contrast the dress beautifully. And they are just the handsomest of couples.

I feel like I’m supposed to love this, but I can’t get all worked up over yet another starlet in granny panties and a sheer skirt. Like, what the fuck else is new? And the green jewelry is just too matchy-matchy. I’m sure it was all very expensive, but together, it looks like it came out of a box of Cracker Jacks.

CHARLIZE THERON in Tokyo // dress by The Row, shoes by Christian Dior

Why are we still trying to make leather dresses happen? They’re not going to happen. She looks like she’s being suffocated by evil trash bags, for God’s sake. That’s not a look.

In defense of Miley: if the hair were just a little less styled and she was wearing, you know, something to cover her tits and ass, she’d look pretty fucking awesome. The jacket is phenomenal, chic and sophisticated, and the shoes are delish. But for the love of God, a double-breasted suit jacket with nothing under it is not a red carpet look, it’s a flasher look. And the hair and makeup age her about twenty years.

We get it. You’re interesting because you stole Barbie’s shoes and paired them with a hipster dress. Congratu-fucking-lations. Now put on something that’s actually flattering, instead of something that you clearly think makes you look so fashion-forward.

First off, that Toddlers & Tiaras hairdo has got to go. Then you can rid yourself of this dreaded mullet dress which is ugly, unflattering, and completely tacky.

Crop tops might be back, but when you pair them with hair and makeup styled by a blind drag queen and a mess of different proportions, they’re better left in the past.

CHLOË SEVIGNY in London // dress and shoes by Versus

Would a size up really have killed you, Chloë? And could you save your kinky sex boots for the bedroom and wear something resembling an actual shoe on the red carpet, please?

KATY PERRY at the Billboard Music Awards // gown by Blumarine

I can handle a lot of Katy Perry’s antics, but when I saw this, I was beyond disappointed. Because, at the end of the day, there’s one thing Katy Perry should not be: boring. If she thinks purple hair and a shiny lilac mermaid gown that’s two sizes too small are worthy of the red carpet, she’s got another thing coming. This is about as underwhelming as it gets.

8 responses to The Week in Celebrity Fashion, Part 2