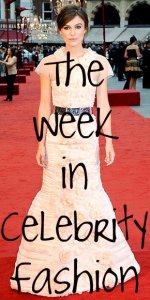 The first few weeks of school have already left me an exhausted, frazzled shell of my former self. But excuses aside, I think we all know it’s time for a metric shit-ton of bitchy blogging.

You might just barely recognize Lizzy Caplan as the phenomenal Janis Ian from Mean Girls, but she’s also in basically every movie coming out this year, so get used to her being around. And I’m more than thrilled to get used to her presence, so long as she’s wearing amazing dresses like this tweed colorblocked delight. I see a lot of dresses I love, and dresses I’d kill to wear, but this is so my style, I want to rip it right off Lizzy’s back. Oh, and while I’m at it, I’ll take the fabulous sandals as well.

Living proof that the wrong makeup and the wrong proportions can kill any look. Her body is fantastic, but the awful length of this dress makes you forget how sexy the top half of it looks. And I’m sorry, but a stylist license needs to be revoked from the blind clown who applied Lizzy’s makeup before this event. White foundation and fire engine red lips? Seriously? Sorry to get all Jewish mother on you, but who would do that to such a shaina punim?

Her hair and makeup seem to have got consistently sloppier and lazier over the past few months, but you still can’t go wrong with Zoe Saldana in Elie Saab. It’s always an excellent match, and the accessories are incredibly chic.

Nobody makes a stroll down the sidewalk look as red carpet-worthy as Jessica. The pants are fab and the shoes and purse are beyond cool, but it’s that freaking amazing tuxedo jacket-and-casual-tee combination that really does it for me. So utterly chic and laid-back, or as laid-back as someone can be when their “let’s just grab a cup of coffee” outfit costs thousands of dollars.

KIRSTEN DUNST on The Tonight Show with Jay Leno // gown by Jil Sander, shoes by Chloé

At first I was appalled – what’s Kirsten doing in a fucking ball gown on Jay Leno, for God’s sake? – but now that I see how relaxed and simple the rest of the look is (natural makeup, hair pulled back into a simple bun, no jewelry), I’ve become a fan. I think you have to be this particular kind of hipster starlet to pull off a gown like this for such a casual event, though, so let’s hope this doesn’t become a particularly widespread trend.

Did all the talented makeup artists in the world recently die in a fire? What the hell is going on with the makeup, ladies? She’s so beautiful, it takes a lot of effort to make her face look this awful, so Miranda, just start firing everyone around you, okay? I think that’s a safe place to start. You can keep whoever chose your dress, because it’s beyond lovely. And I see what you were going for with those shoes, which match the almost-impossible-to-see flecks of coral in the dress, but honestly, I don’t think it worked as well as you’d hoped.

I am about to type a weird sentence: I have a thing for Camilla Belle’s eyebrows. I mean, it’s nowhere near my love of Michelle Dockery’s eyebrows (Lady Mary of Downton Abbey, obviously), but it’s definitely becoming an obsession. Anyway, the dress is lovely and the hair, makeup, and jewelry are all fabulous. I wouldn’t have picked a nude shoe, but then, I’d almost never pick a nude shoe, just because I’m so tired of seeing them all over the red carpet.

Love the bouncy curls and the fantastic clutch. The dress is cute, but the purse is what makes the outfit work as a whole. Though she could have picked a more interesting shoe.

Individually, as pieces, I don’t particularly like anything Olivia Palermo is wearing, save for her sunglasses. And yet somehow, together, she looks flawless. I wish I could explain or replicate this phenomenon, but I’m sure it’s beyond my bank account anyway.

It’s a lot of sideboob for my tastes, but I still somehow love this look. That orange-red silk is perfect on Jaime, and I think the hard-and-soft contrast with the studded shoes and clutch looks pretty darn fantastic. I just wish she’d finally land on a hair color that doesn’t look like it came out of a bottle.

Taylor’s auditioning to be a Kennedy, y’all! And when you’ve got the all-American blonde hair and blue eyes, all you need is a vintage Prada dress and some bow-adorned red shoes to date American royalty. Girlfriend knows how to network, I’ll give her that.

CATHERINE, DUCHESS OF CAMBRIDGE at the Paralympics // jacket by Emilio Pucci, shoes by Stuart Weitzman

Love the coat-dress; hate the espadrille-looking platforms. I feel like if I never saw the Duchess south of her ankles, I’d like her wardrobe infinitely more.

That’s right, dear readers – Miley Cyrus wasn’t the only starlet to cut off all her hair and dye it platinum this month (but O’ll get to her in the VMAs post later on, so stay tuned). Mad Men‘s own Peggy Olsen seems to have graduated from Sterling Cooper and gone for a full makeover. I think the color actually works, though I’m not 100% sure the shape is right for her face. And if you’re going to wear a black lace Dolce & Gabbana dress after we’ve already seen thousands on the red carpet, it should be a much more interesting one than this.

Oh, and the shoes, Peggy? Burn them in a fire.

Jessica Chastain, your hair is flawless and your makeup is lovely, and that dress is such a lovely color on you. But this is somehow too loose in the shoulders and too tight in the bodice, and I’m befuddled by those shoes, which look like an ever-so-slightly jaundiced version of your skintone. You can look beautiful in anything, but I’m not sure why this was the “anything” you picked.

The flapper thing is so 2011, Nicole. And this isn’t a particularly well-executed version. But I dig the shoes, even though they’re all wrong for that dress and they don’t work particularly well with your tattoo, either.

If you’re going to wear the same exact thing literally every time you hit the red carpet, what is the fucking point of even showing up?

Ashley Greene – you are not Barbie. Please edit your wardrobe accordingly.

I hate the high ponytail, the ridiculously heavy makeup, and everything about this terrible gown. She’s about a foot too short and a size too small for it, and that shiny purple is terrible for a hundred different reasons.

The Democracy Diva will be blogging hard and fast again from here on out, so check back soon for updates on Project Runway, New York Fashion Week, the MTV VMAs, and the Venice and Toronto film festivals!

6 responses to The Week in Celebrity Fashion, Part 1